Why is the fundamental group of the projective plane $C_{2}$?

I just recently know that there are topologies with finite nontrivial fundamental groups (homotopy curve). I just can't wrap my mind around it at all.

If you have a curve, and somehow cannot shrink it to null, then there must be a hole blocking the curve from shrinking. And since there is a hole there, you can just wrap the curve around the hole as many times as you like, producing a more non-homotopic curve. So the fundamental group, if nontrivial, must contain a copy of $\mathbb{Z}$, right?

Apparently, that reasoning does not work, but I cannot wrap my mind about what went wrong here. So if it's not a hole that's blocking the shrinking, then what, exactly is that? What's a concrete way to visualize such a thing?

Here's an illustrated version of Sharkos' answer. We'll use the disk model of ℝP2: consider a disk with antipodal points on its boundary identified. 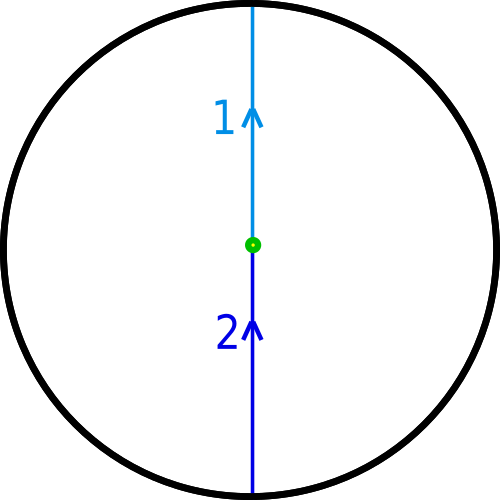 We cannot shrink this loop to a point: we can modify it within the interior of the disk, but that doesn't get us very far. And if we try to change the loop at the point it crosses the boundary, we have to move the top and the bottom of the loop so that they cross at antipodal points, otherwise we brake the loop. For instance, doing the following breaks the loop: 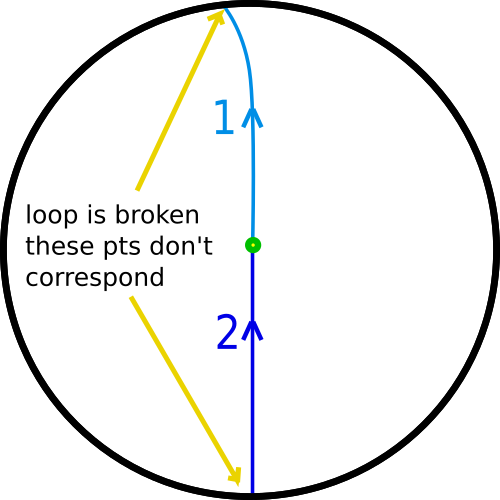 We can slide both points so they stay opposite each other: 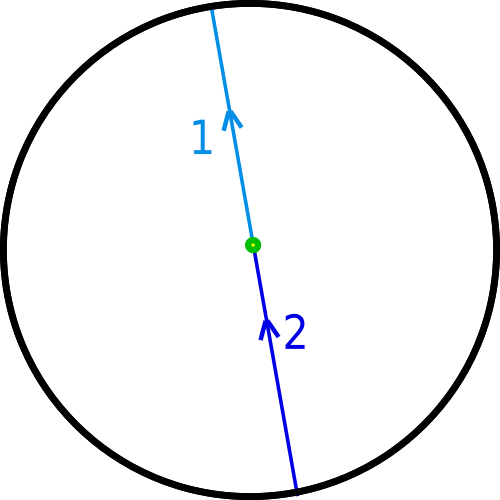 But that doesn't allow us to shrink this loop to a point.

Next we consider a loop that crosses the boundary twice: 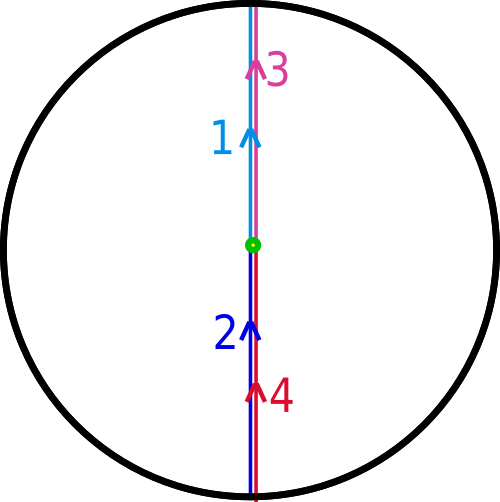 As in the previous example, if we move a point where the path crosses the boundary we have to move the opposite point in the opposite direction so they remain antipodal to one another. We can start to rotate the 1st and 2nd parts of the path counter-clockwise in a continuous way until it looks like this: 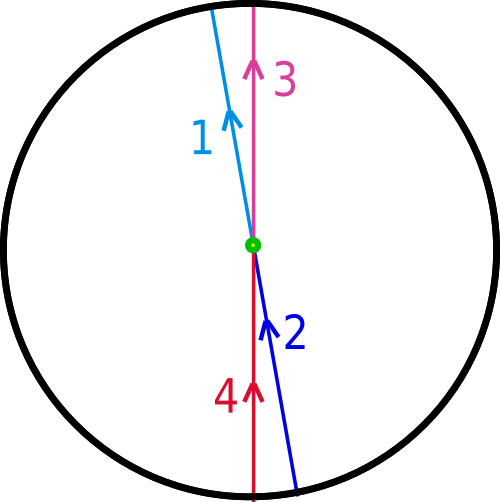 The loop is not broken in any way. We continue to rotate it: 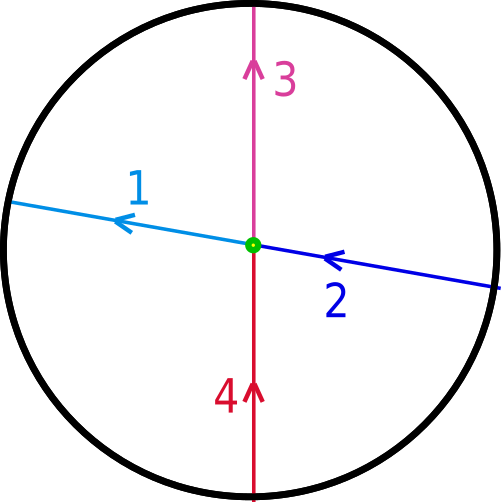 Until we've rotated the first half of the path 180 degrees: 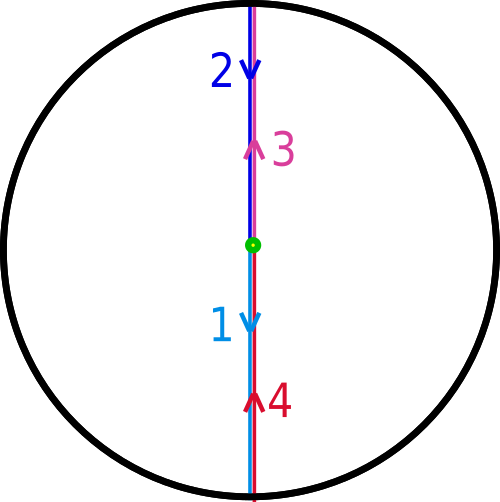 And this is where the magic happens: if we imagine a particle following along the loop, it travels down part 2 (in dark blue) and when it reaches the center it turns around and travels up part three (in pink). That means that we can pull the point where the end of part 2 and the beginning of part 3 meet upwards without breaking the loop: 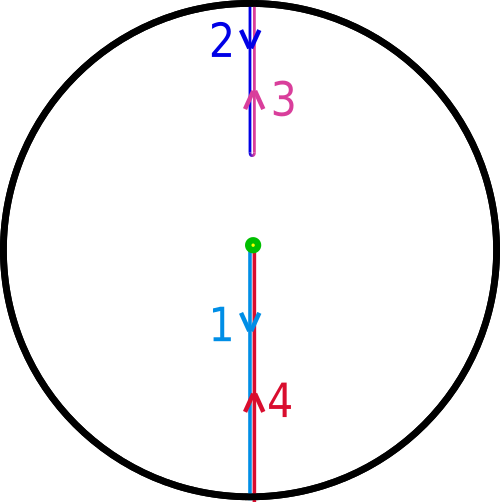 We can now pull the 2-3 part of the loop past the boundary: 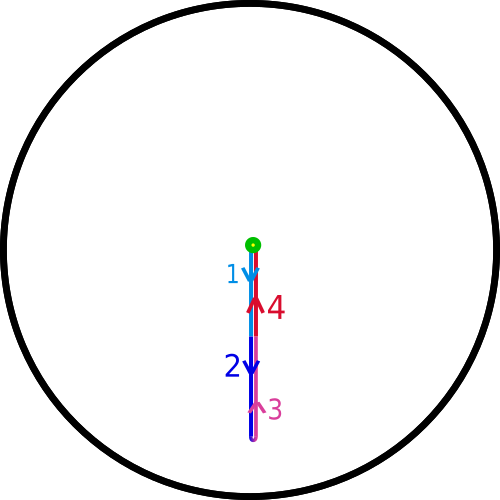 At which points it's evident that the loop is contractible.

As Sharkos said, it's sliding points around on the boundary that messes with our intuition: when there is only one point where the path crosses the boundary we cannot shrink the loop to a point because any time we move that point it must be "reflected" in the opposite side of the circle (this is more of an appeal to our intuition rather than a rigorous proof). When the path crosses the boundary twice we can slide one pair of opposite points around to effectively "untangle" the loop.

In order to make things concrete, we describe $\mathbb{R}P^2$ as a square as Joseph pointed out in the comments:

We would similarly describe $\mathrm{SO}(3)$ as being a solid ball with antipodal points identified. Then intuitively you can probably convince yourself quickly that

The trick, however, is in considering following this last loop twice. It turns out that by bending one of the crossings around you can cancel out the boundary-crossing.

I'm not going to open up Paint just now, but imagine a line which crosses from left to right twice very close by. (They should form a pair of parallel lines symmetrically placed around the middle.) Call the 'two' lines you draw $L,M$, going from $l_1 \to l_2$ and $m_1 \to m_2$ left to right respectively.

Now $l_2$ is constrained to lie antipodal to $m_1$ and similarly the other two points, but (as Stefan pointed out) there is freedom to move these pairs independently. Start sliding $l_2$ around the square anticlockwise. $m_1$ moves anticlockwise opposite it. This makes $L$ start to bend upwards on the right, and $M$ start to bend downwards on the left.

Just draw the intermediate stages and you might convince yourself!

It's this freedom to slide stuff around which screws with your intuition. You really can't visualize projective planes as nice, oriented embedded surfaces, so your intuition of fundamental groups as being determined by genus is... horrifically broken to say the least.

Now consider the fibration $S^2 \to {\bf R}P^2$ given by identifying antipodal points. The intuition from the paragraph above applies again. You need to go around any non-trivial loop in ${\bf R}P^2$ twice to obtain an honest loop in $S^2$, which is then of course contractible because $S^2$ is simply connected. If you only travel once, you'll get a half-circle in $S^2$ connecting antipodal points and you can check yourself that there's no way to shrink this half-circle to a point.

Not the answer you're looking for? Browse other questions tagged algebraic-topology intuition fundamental-groups projective-space or ask your own question.