I know that: $$\lim_{x \to 0}\frac{\sin x}{x} = 1$$ However all proofs I have seen resort to some kind of geometric appeal or otherwise fall to L'Hôpital's rule or Taylor series. However, I want an to see an proof that is purely algebraic (I mean least geometric intuition, mainly not diagrams to convince the reader of something, but obvious algebraic statements one after another) that uses nothing advanced like series and [I mean accessible to ordinary calculus beginner]... I do not want want elipson delta proofs but something that has quite evidently, no gaps.

Edit: Some comments have said sine cannot be defined without geometry or series. Well, I meant to say that we can assume that we know the unit circle definition. I only meant to say that we do not rely on diagrams in the proofs. We know the obvious facts that what sine and radians are, etc. I did not mean it to take to formally and rigorously.

Hope you guys have some elegant and delightful proof of the kind. It is something which is bothering me for quite a while.

I believe the difficulty many students have in understanding the proof of $$ \lim_{x\to0}\frac{\sin x}{x}=1 $$ is that it often comes too early in a calculus course, before one has learned integration, and therefore before one has learned how to think about arc lengths and areas. Since arc length (or area) enters fundamentally into the definition of the $\sin$ function, the proofs that are usually given end up relying on geometric arguments that seem out of place next to the style of argumentation that one otherwise encounters in the first part of a calculus course. I'm not suggesting that these arguments aren't rigorous, or that there aren't good reasons for bringing up trigonometric functions early—but I believe it can be satisfying to understand how this result comes about, rather straightforwardly, once one has defined the trigonometric functions in calculus terms.

If definite integration and arc length are unfamiliar to you, then this proof may not help. However, the notion of arc length is used only to motivate a definition, and all one needs to know about the definite integral is that it represents the area under the curve. This is used to obtain upper and lower bounds.

We make a purely algebraic definition of the $\arcsin$ function as follows. For $y\in(-1,1)$ let $$\arcsin y=\int_0^y\frac{dt}{\sqrt{1-t^2}}.$$ Interpreted geometrically, this is, in fact, the formula for the signed length of the arc of the unit circle that extends from $(1,0)$ to $(\sqrt{1-y^2},y)$, and therefore indeed the $\arcsin$ function as usually defined, but this definition itself involves no geometry. The $\sin$ function is then the inverse of this function, at least in an interval containing 0. (In fact, in the interval $(-\pi/2,\pi/2),$ where the symbol $\pi$ represents twice the upper bound of the $\arcsin$ function. Thinking about how to extend the function to the entire real line is not needed for our purpose.)

Added remark: Continuity of arcsin on (−1,1) follows in the definition I have used from continuity of the integrand and the Fundamental Theorem of Calculus (which actually implies differentiability). Continuity of sin follows from the easy fact that arcsin is one-to-one on (−1,1) and from the theorem that the inverse of a continuous, one-to-one function is continuous. 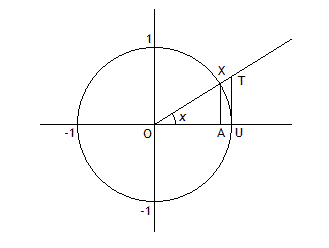 This may be more for fun than proof as all proofs require some notion of sine that is either a series or based on geometry.