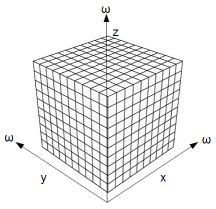 It "only" takes the ability to visualize higher-dimensional (hyper-)cubes to visualize arbitrary countable ordinals of the form $\omega^n$ as $\omega^{n-1}$ appropriately ordered copies of $\omega$.

But this ability comes to an end when thinking of the countable ordinal number $\omega^\omega$, since the $|\omega|$-dimensional hypercube $\omega^{|\omega|}$ consists of uncountably many cells and cannot represent a countable ordinal.1

$\omega^\omega$ can be visualized, in what I think is a fairly nice way in a static 2D image featured on the wikipedia page for ordinal number: 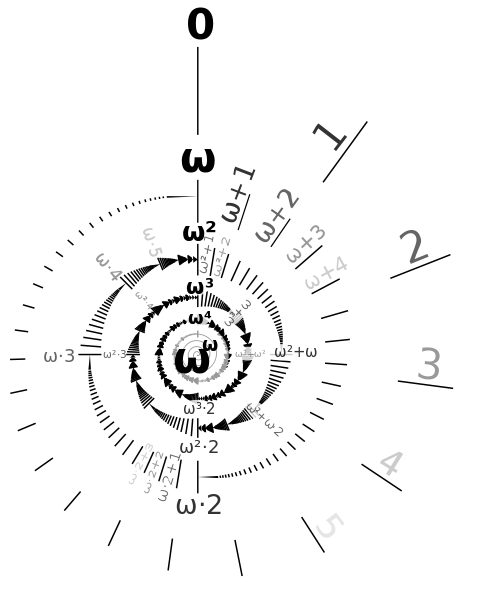 Also, if you're willing to allow dynamic visualizations, then Stephen Brooks's transfinite number line goes well past $\epsilon_0$ (to $\Gamma_0$), as well as providing a more linear (if colorful) look at $\omega^\omega$: 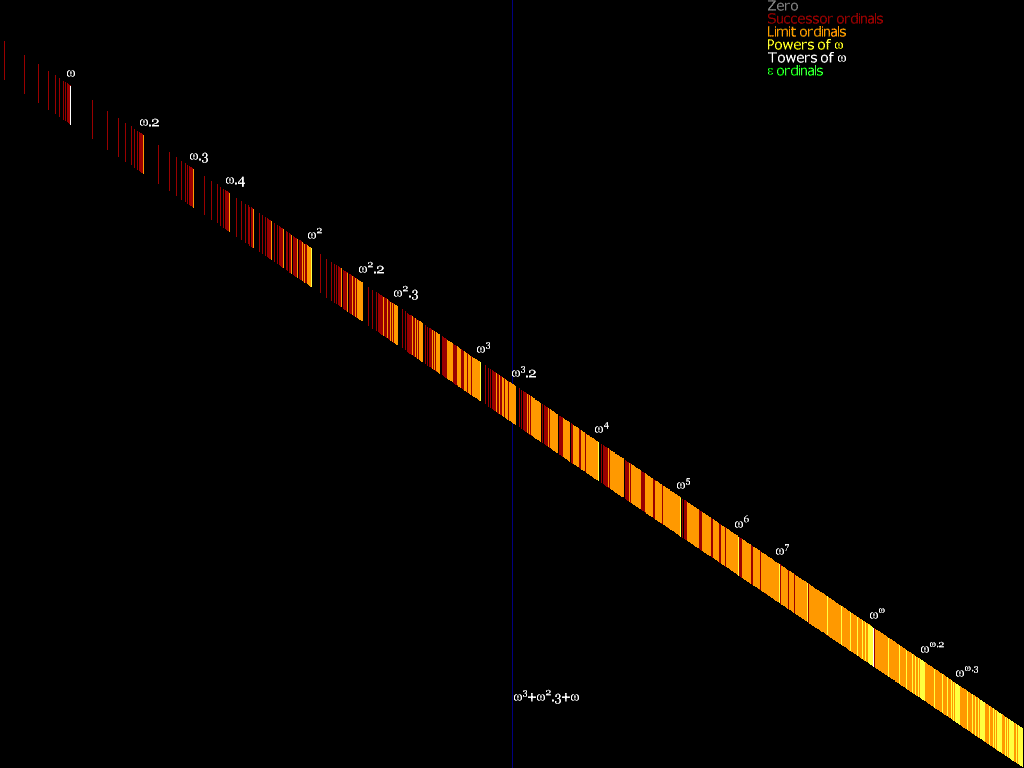 It is wrong to think of $\omega^\omega$ as a hypercube of actually infinite dimension, which would correspond to the set of all infinite sequences of natural numbers, which is uncountable. One may think - if at all - of $\omega^\omega$ only as a hypercube of potentially infinite dimension, e.g. as $\bigcup_{n<\omega}\omega^n$, i.e. the functions $f:\omega \rightarrow \omega$ with finite support.

Especially: Other than $\omega^n$ – which is a well-ordered set of disjoint copies of $\omega$ – the ordinal $\omega^\omega$ cannot be thought of this way, even though the hypercube or the spiral representation might suggest it.

I recently asked myself the same question. A google search led me to this topic. Although Asaf Karagila gave the answer in his comment, I would like to point a lecture notes which considered this - https://www.dpmms.cam.ac.uk/~tf/fundamentalsequence.pdf . Look at page 18, the last paragraph (under Exercise 4, continues on the next page). There is also given intepretation of $\omega^{\omega^{\omega}}$ and of $\varepsilon_0$.

Not the answer you're looking for? Browse other questions tagged vector-spaces set-theory ordinals visualization or ask your own question.

16
How do you find the smallest of homeomorphic ordinals?
24
Intuition for $\omega^\omega$
8
Is there a graphical way to represent limit ordinals up to $\omega_1$?
8
Basic examples of ordinals
7
Is there any countable ordinal number which has a member undefinable?
3
Embedding $\omega_1$ into the direct sum/product of $\Bbb R$'s and $\Bbb N$'s
1
Ordinals and Countability
1
Fixed points of ordinal exponentiation for bases besides $\omega$