How to construct such a circle? Only straight edge and compasses are allowed.How could we draw if we were to draw the circle tangent to two straight lines and a circle.

The most important trick is to note that if you want a circle tangent to three given circles, then depending on which of the 8 possibilities (there could be less) you want, you can appropriately enlarge or shrink the radii of all four circles such that their centres remain the same and they all remain tangent but one of the three circles becomes a point.

Finally, for the original problem and others like it, you can invert almost anywhere to get the problem to be equivalent to the above solved problem.

As pointed out by user21820, this answer only covered the very special case where the two circles and tangents are kissing each other. i.e. this answer didn't really address the given question properly. However, since the answer is sort of cute. I'll just leave it here as is.

I'm going to only cover the part of the problem in the title. Namely,

$\hspace0.5in$ how to construct a circle which is tangent to a pair of circles
$\hspace0.5in$ and a line which are tangent among themselves.

The other part of the problem in question body:

is relatively simple. My only hint is the center of the desired circle can be obtained by drawing two pair of parallel lines. 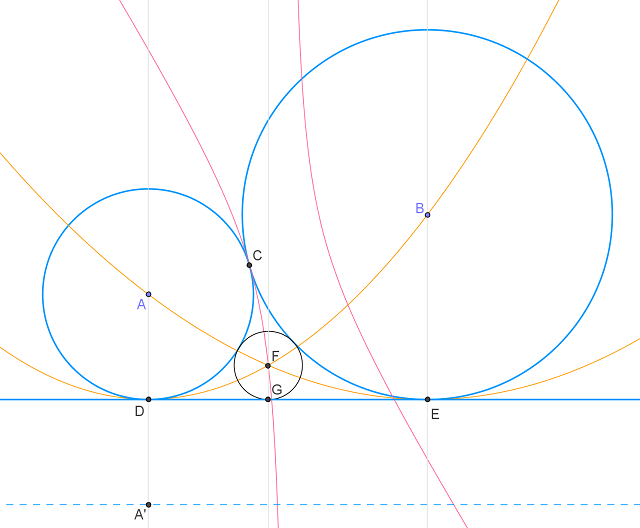 Given an arbitrary circle, if it is tangent to both circles, elementary geometry tells us its center will be lying on a hyperbola passing through $C$ with $A$ and $B$ as its foci. This is the pink curve in above figure.

Similarly, if a circle is tangent to the first circle and the line, its center will be lying on a parabola passing through $D$ and $B$. If one reflect $A$ w.r.t the line $DE$ to the point $A'$ and draw a line parallel to $DE$ (the blue dashed line in above diagram). The parabola will have this line as its directix and $A$ as its focus.

Part 2: Ruler and Compass only construction 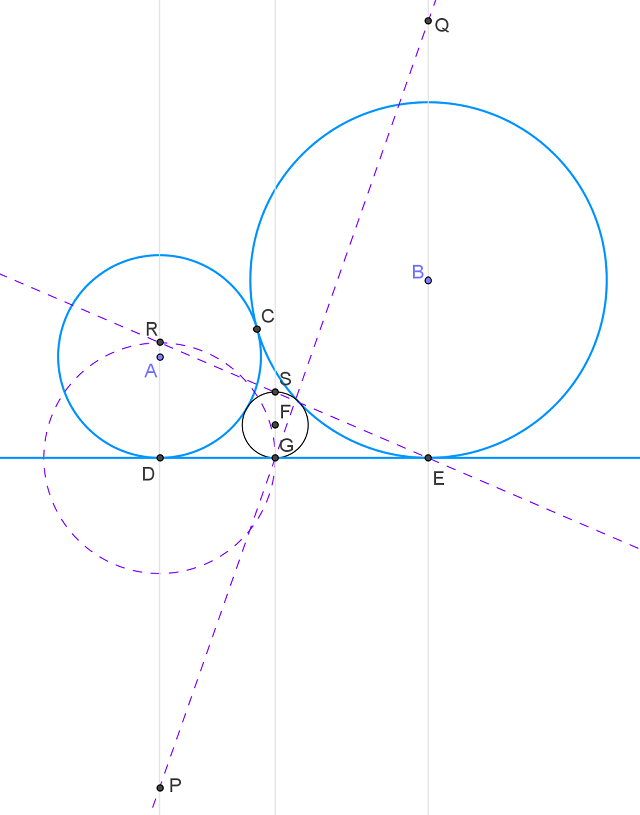 Start with these geometric facts, it is enough to derive a "ruler and compass only" geometric construction of $F$, $G$ and hence the desired circle. To simplify description of the recipe, I will assume people already know

As illustrated by diagram above, if one construct a pair of points $P$ on line $AD$, $Q$ on line $BE$ such that

Part 3: Why these work

Finally, above equation in $y$ can be rewritten in a more symmetric form

There was already a complete version answer to the OP's question with details and discussions on different cases in general here: Apollonius's Construction by Hubert Shutrick

One example created via Geogebra per the principles is as:

4
How is the circle that fits beneath two adjacent circles related?
9
circle tangent to three circles
4
Constructing a circle that internally tangents a circle $\gamma$ and passes through two internal points.