Why are complex numbers considered to be numbers?

I've had Dave's Short Course on Complex Numbers on the web since 1999, and I'd like to add a page on why complex numbers are (or should be) considered to be numbers. I'm frequently asked that question.

Perhaps it's just historical and sociological, but I'm hoping for an answer that there's something intrinsic about complex numbers that makes them fit into the category of number. 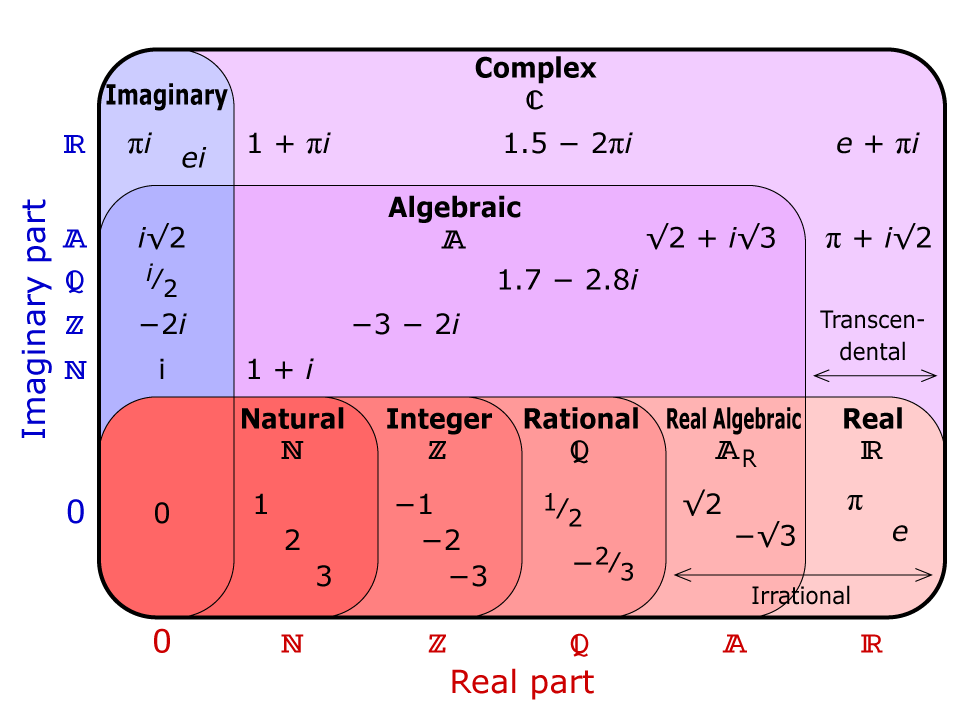 Complex numbers are a hack. That is, a retrofit. They were discovered, not planned for, and added to our system of math.

The same is true for imaginary, transcendental, real, rational, and negative numbers. Zero and infinity as well.

They are all additions to the counting / natural numbers. In different ways, they all work by rejecting the premise of a question. That is, rejecting its assumption.

Negative
How many apples will you owe me if I give you this apple? -1. Minus one? No, negative one. You already owe me two from yesterday. So right now I owe you -2. Negatives reject an assumption by completely reversing it. This could have been avoided if the question had assumed the speaker was the one in debt. By making the subtraction operation part of a number we don't have to force the question to change to answer it.

Here we're rejecting the assumption that a perfect answer is expressible in counting numbers with anything less than an infinite number of divisions. Instead we make a root operation part of the number to solve a polynomial problem.

Transcendental
How many 10 foot panels should I buy to enclose a circular coral around a horse run with a 12 foot lead line? At least 8. At least? Well if you could buy curved panels and get at least one at a custom length and you didn't mind the horse having to run on top of it then the answer is about 7.5398223686155037723103441198708 ten foot panels. Again with the digits! OK OK, it's exactly (2π)(12/10). Transcendental numbers reject the assumption that a perfect answer is expressible in counting numbers, even with polynomial operations, without symbolic constants like π. (I know where the 12 and the 10 come from, but why the 2? Tradition.)

Real
How many inches tall are you? 71.5 inches. 71 and what? .5, take an inch, divide it into 10 pieces of inch, 5 of those pieces plus 71 inches is how tall I am. This rejects the assumption that you can measure my height with whole inches. Again, we're making the division operation part of a number. But now it's an arbitrary number of division operations. Allow that go on for up to an infinite number of divisions and you get the real number line.

Imaginary and Complex
What number can I multiply by itself and get a negative 5? You can't. What if I could? Huh? Imagine I can. What would that be? Imaginary numbers reject the assumption that numerical answers to a question must either exist on the number line, as conceived by the question, or not exist at all. Much like the other extensions to the counting numbers I've mentioned here imaginary numbers hide an operation, the square root of -1, within them letting you procrastinate dealing with it and it's consequences. Add any non zero real number to that imaginary number and it's suddenly complex. We can't really add it so we just leave it. Procrastinating again.

Zero and Infinity
How many days are left in February? Zero, it's March already. Zero is the most iconic rejection of a question's assumption. It's a relatively new idea. Some number systems don't even have it (for example, roman numerals).

How fast will I have to drive to get to Albany when you do? Infinite, I just arrived. Infinity also rejects an assumption, be it a limit or a rate.

Both zero and infinity are some of the poorest behaved numbers in our system of math. They are very useful but they are destroyers of information if not guarded against. Let them loose unaware and they can convince you that 1 = 2.

Matrices
The biggest thing complex numbers have going for them is that unlike matrices they work in our algebra. Infact you can think of the preceding numbers as nothing but a list of things we can cram into the system without breaking it.

Matrix multiplication is not commutative. This breaks the system. Now when you deal with X you have to KNOW whether or not X is a matrix or you don't know what is legal to do with it. Of the numbers mentioned so far the only ones that come close to this problem are zero and infinity. So I would argue that complex numbers have more of a right to be called numbers than zero does.

Numbers
Thought of this way, a number could be any mathematical expression, free of unknowns, that behaves reasonably well within our algebra. If I can stick it in X and forget what it is for a time, I think that's a number.

You are right, the question is foremost "what is a number", then you will see that complex numbers are numbers. Mostly because the word "number" doesn't have a clear meaning in mathematics, or even in the natural language of people.

Numbers are notions representing quantity. So the question is, what sort of quantity do complex numbers measure? They have more than a handful of applications where they are used to measure quantities, which seems intrinsic enough to begin with.

I suppose that there is probably a historical-sociological reason as well, but if you are looking for an "intrinsic property" then that would be the best definition of "number" I can come up with, and indeed the complex numbers satisfy it.

My best understanding is that it is just a historical accident that complex numbers ended up being called "numbers".

Historically, each extension of the "number" concept -- from naturals to rationals to reals, and to negative versions of either -- has been met with resistance that needed to be overcome. (It even used to be contentious whether or not $1$ is a "number", because the relevant passages of Euclid can be read as saying that only a multitude of units is a number).

And the driving force that overcame the resistance towards new kinds of numbers doesn't seem to have been that they meet any pre-existing standard for what a "number" ought to be, but simply that there was a perception that they needed to be called "numbers" before one was allowed to do mathematics with them.

Some time after complex numbers won acceptance, it became commonly accepted for new branches of mathematics to consider things that were neither numbers nor geometric objects. Once that happened, there was no pressure to insist that new things you want to reason about are necessarily "numbers".

This might well have happened at some other time in history, and we might have ended up considering, for example, vectors and matrices to be special kinds of "number".

Numbers count or measure, but complex numbers don't really seem to do either, so why are they called numbers ? Is this what you're asking ? For starters, they arose in a numerical context, as roots to polynomial equations. Obviously, since all the other roots are numbers, why wouldn't they also be as such ? Furthermore, all operations between two real numbers can also be done between a real number and a complex one, or between two complex ones. Now let us revisit the first sentence: Do complex numbers really not measure anything ? Perhaps not age or distance, but aren't there so many other physical concepts to which their existence fits like a glove ? Like mechanical energy, which is in a constant state of flux, oscillating between two polar opposites, kinetic and potential. Or wave forms, like sound, or alternating electrical current, etc. So if they do measure after all, and if the same laws and operations apply to them as they do to the other numbers, or, in other words, if they share so many characteristics in common, why shouldn't they be called by the same name ?

3
Complex Values and Linear Algebra
3
How are complex numbers useful to real number mathematics?
3
Do sine and cosine of complex numbers have anything to do with right-triangles or circles?
2
Natural ways in which the *complex* valued L-integral and *complex* Hilbert spaces come up
2
Problem comprehending the representation of complex numbers by a unit circle
2
Reason for Graphing Complex Numbers