Deal or No Deal: Monty Hall?

This question was inspired by another question posted today: Monty Hall Problem Extended.

So I thought that the comments an answers brought up a great point about increasing the doors to 100 or something much larger, and using that as a way to help visualize why switching is always the best choice when trying to explain the problem to others.

And then I was thinking about the game show, Deal or No Deal. For those unfamiliar with Deal or No Deal: there are 26 cases, each containing amounts of money ranging from \$0.01 to one million dollars. You choose one case, and it's "yours" and out-of-play (this is analogous to choosing the first door in the Monty Hall problem). Throughout the game you open 24 of the remaining cases, and you see how much money was in each case.

In the end, you are left with 2 cases: "your" case, that you chose in the beginning, and the only other case you didn't open. This is where it becomes Monty Hall: you can either choose to keep your case, or switch cases and get the other one.

So what I'm wondering is, does the Monty Hall logic of "always switch doors/cases" apply here? The differences:

My first vague thoughts are... If you make it to the end and the million dollar case still is in play, Monty Hall applies and you should switch cases. Because it's the same idea; I had a 1/26 shot at the million. 24 have been eliminated. It's much more likely that the other case has the million.

But if the million is eliminated while you're playing, what then? Can Monty Hall not help us, because you can't compare the probability of selecting the million dollar case because now it's zero? I'm trying to think of a way to figure out whether or not you should switch, in an attempt to get the case with the most money in it. We know that \$1,000,000 is no longer available. But is there anything we can do to decide which case is likely to be more valuable? Or is this outside Monty Hall's bounds?

The key is: Monty knows where the car is (and will never open that door). We don't know where the million dollar is so we MIGHT open that door. For an illustration, we look at how the tree diagram differs for the two cases.

Suppose we have 3 doors, A, B and C and our car/million is in door A. We further assume we will always switch. (Once we understand this, we can extend it to $n$ doors and see that the situation will be similar.) 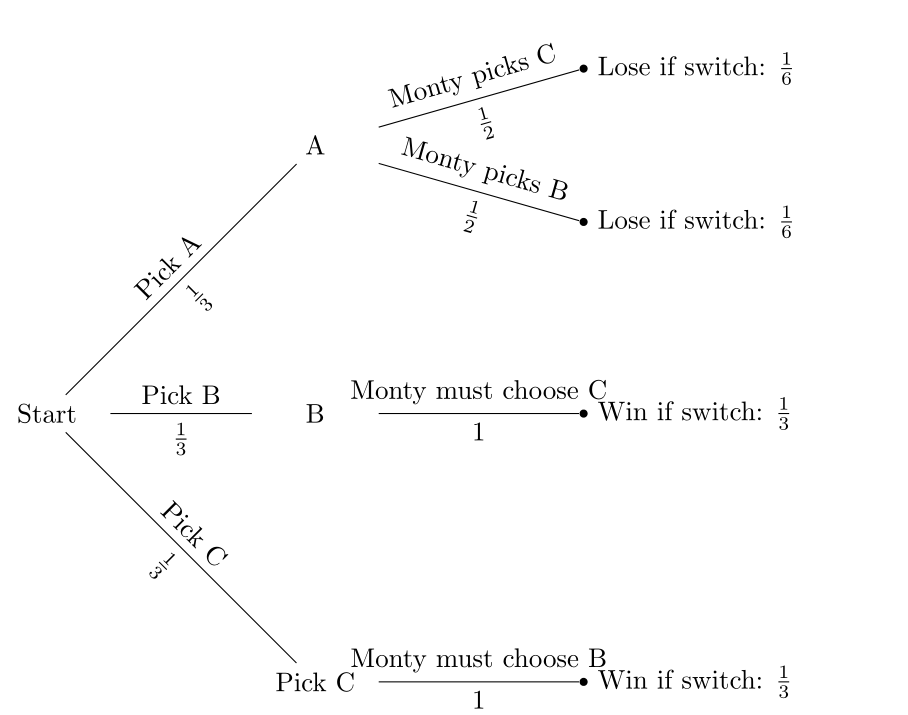 Case 2: Deal or No Deal scenario 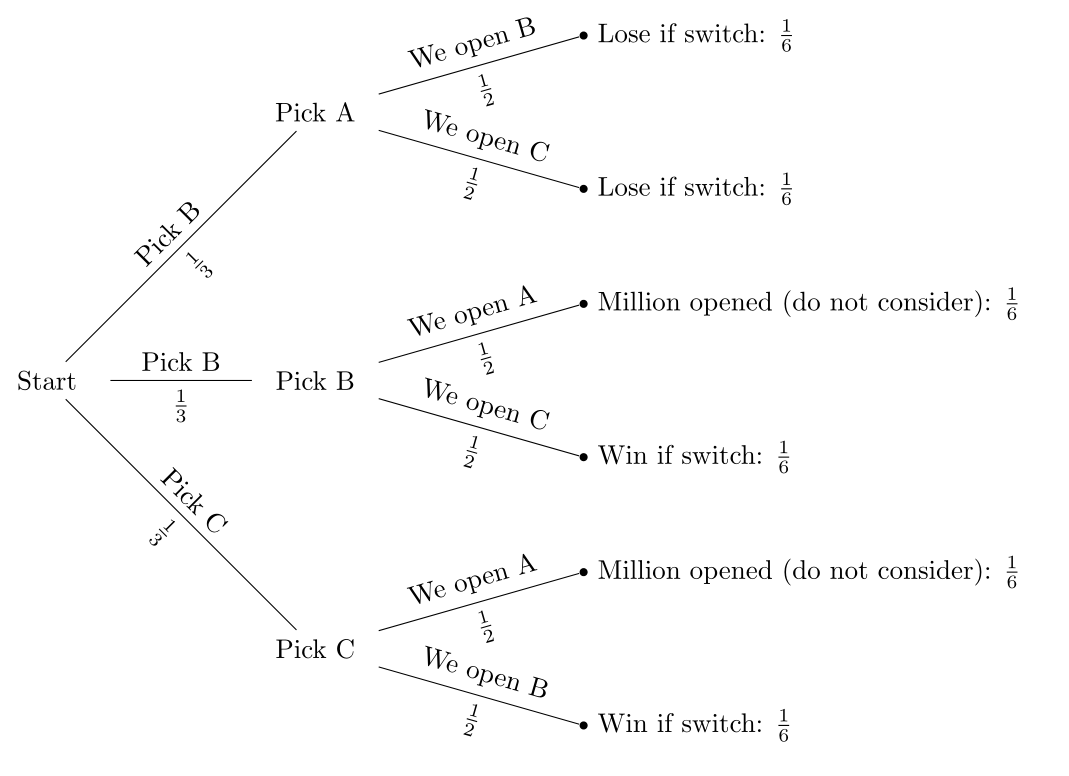 Notice our assumption in the question is we only look at the situation if the million has not been opened. So we are in essence calculating a conditional probability. If we switch,

Odds million is not picked right away: 25/26

If you get through picking 24 briefcases, and 1 million dollars still remains when given the option to switch briefcases with 2 left, the odds that the other briefcase (not the one you picked) of having $1 million is 25/26. SWITCH!"

Literally, all you need to do is replace "1 million" with "1" in this scenario and the egregious fallacies in this logic are overtly obvious.

I know it sounds similar to the Monty Hall Problem, but since ALL selections are random (NOT the case in the MHP,) it really only requires application of VERY elementary statistics to determine the probability of these scenarios. There are 325 different combinations of final two cases (assuming 26 different values,) and for each occurrence of two remaining cases, regardless of value (call them x and y,) there is a 50/50 probability that x or y is the selected case or the remaining case.

The probability of correctly guessing the million dollar case in the beginning is $\frac1{26}$. So if it is left at the end then there is a $\frac1{26}$ chance that staying is the winning choice (numbers will be fixed later).

Odds million is not picked right away: 25/26

If you get through picking 24 briefcases, and 1 million dollars still remains when given the option to switch briefcases with 2 left, the odds that the other briefcase (not the one you picked) of having $1 million is 25/26. SWITCH!

Firsly, let me preface this with "I'm happy to be wrong".. I'm not a probability or stats guru.. but surely the previous arguments are incorrect due to the fact they are not considering the pick of the initial box?

At the start of each Deal_Or_No_Deal game, someone at the studio picks a random box from 26 boxes to be the contestant's box. That person has a 1/26 of selecting the million for the player.

After this all the player really does, in a very long-winded way, is pick a second box before deciding whether to swap (if we are looking at conditional based probability, where we are assuming he/she makes it that far with the million intact)..

Then that person picks from a selection of 25 boxes. now, is it not fair to say that it would be better to pick from the wider set of boxes and stick with the box the other person chose first, than yours?

worded another way: if i put 100 bits of paper on the floor, and one had a coin underneath... and i ask you if you want to try and guess which one had the coin under it first or let a second person go first.. while you might think that your odds would be better if the first person went first and got it wrong (they would obviously).. is it not better to be the first person in this scenario statistically?

If the contestant knew beforehand, that he/she would end up in a situation with two briefcases left, where one of them was the million dollar briefcase, then he/she should switch.

In Monthy Hall, you know that the host will open a door with a goat behind it. If the host didn't know which door had the car behind it, then it would be 50/50. There is a rule applied to the door with the car, it cannot be opened.

Not exactly answering with math, but I hope this helps someone understand the difference.

Not the answer you're looking for? Browse other questions tagged probability game-theory or ask your own question.