There exists a Theory of Identity in mathematical logic. I've encountered it for the first time in Principia Mathematica by Alfred North Whitehead and Bertrand Russell (1910).
Quote: "This definition states that $x$ and $y$ are to be called identical when every predicative function satisfied by $x$ is also satisfied by $y$".
Many contemporary philosophers call the principle which expresses this view "Leibniz' Law".
One particularly explicit statement can be found in Introduction to Logic and to the Methodology of Deductive Sciences by Alfred Tarski. In chapter III, On the Theory of Identity, it is read that "Among logical laws which involve the concept of identity, the most fundamental is the following: $x = y$ if, and only if, $x$ and $y$ have every property in common. This law was first stated by Leibniz (although in somewhat different terms)."
Tarski does not provide a reference to the place where, according to him, Leibniz stated that law. Further refinements can be found on the Internet. But, for our purpose, it is sufficient to stick to the original definition, as given with the Theory of Identity by Tarski / Russell and Whitehead: $$ (x = y) :\Longleftrightarrow \left[\;\forall P : P(x) \Longleftrightarrow P(y) \;\right] $$ Where $:\Longleftrightarrow$ means: logically equivalent by definition. Let's try something with that definition. Every property in common, they said. We take that quite literally and have, for example: $$ P(x) :\Longleftrightarrow ( x \, \mbox{is on the left of the} \, "=" \, \mbox{sign} ) $$ With this property in mind, consider the expression: $$ 1 = 1 $$ Then we see that the $1$ on the right in $1 = 1$ is not on the left, hence the property $P(1)$ as defined does not hold for that one. Consequently: $1 \ne 1$. We have run into a paradox.
Oh, you should say, but self-referential properties are of course not allowed. Sure, I am the last one to disagree with you. This highly artificial example stresses an important point, though:

Are you sure that you are not mixing two different concepts ? When you consider decimal representation of real numbers, you are speaking of :

2) two names for the same object (the real number $1$) : in this case you are dealing with names as string of symbols of infinite lenght, that are not so "standard".

I think that there are different aspects regarding identity.

1) From a mathematical point of view, equality is not defined; it is assumed. We simply know what equality between numbers, triangles, etc. are.

includes the equality symbol as a primitive logical symbol which is always interpreted as the real equality relation between members of the domain of discourse, such that the "two" given members are the same member. This approach also adds certain axioms about equality These equality axioms are:

Many other properties of equality are consequences of the axioms above, for example: symmetry and transitivity.

In second-order logic, the insight of Russell, etc, was that, assuming a formal counterpart of Leibniz's principle, it was possible to derive the aforesaid basic properties of equality. Is this a definition of identity ?

In second-order predicate calculus, we can regard $x=y$ as an abbreviation for $\forall P(P(x) \leftrightarrow P(y))$, instead of introducing it as a primitive predicate. Since conceptually the idea of equality underlies our notion of a domain and of predicates over the domain, it seems more elementary and direct to introduce equality as we do than to define it by refernce to all predicates.

You can see also Derek Goldrei, Propositional and Predicate Calculus (Springer, 2005), para.5.4: The equality axioms and non-normal structures, where the limitations of axioms for equality are discussed.

Update. A nice example of the non-triviality of (non)identity is the following. Suppose $x$ and $y$ are pictures, like in well known puzzles for children, when they say "find the differences": 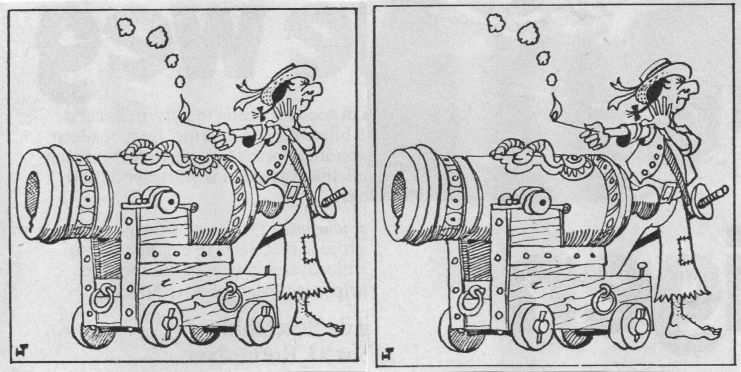 0
Why do we use the term “equivalent” with Operators but “equal” with Functions?

6
Logical issues with the weak law of large numbers and its interpretation
2
Ramified Type Theory: Determining Orders/Levels
1
How to make a good definition
0
Rational numbers and leibniz law
0
Does it make any sense to prove $0.999\ldots=1$?
52
What are the Laws of Rational Exponents?
3
How to prove $2+2=4$ using Zermelo–Fraenkel Set Theory?
0
Logical definition with equalily and Law of Identity in Suppes' “Introduction to Logic”