I struggle with the problem of calculating radius and center of a circle when being in taxicab geometry. I need the case for two and three points including degenerate cases (collinear in the three point example, where the circle then should contain all three points, while two or more on its borders). Normally, I would simply use the equations

But in taxicab geometry, it is (from what Wikipedia says)

I have no idea how to get a equation system in order to reach a general formula for my circle, and Google was not too helpful here. Is there a way to deal with it?

So what I want is:

1) Given two points, calculate a circle with both points on its border. If there is more than one, pick the one with the smallest radius.

All that takes place in taxicab metric.

To clarify, I do not mind whether there is no unique solution, but I would pick the one with smallest radius from the set of solution candidates.

I have no fixed center point, it can be chosen arbitrarily and has not to be one of the three points.

I made a GeoGebra Sheet with the formula given by *Emanuele Paolini *, and it looks like it may work (I have no idea how to thoroughly proove it mathematically), but I as a non-math dude am satisfied with 'it looks like it works'.

The radius is the distance, so $r=d(x,y)$. Now remembering that the "circles" are squares and you know the radius, you can draw the square around it. If you have three points calculate the distance as above between one point(the center) and the other two points, take the max distance of those calculations and you have the radius such that the square contains all 3 points.

Edit: If you want the smalles radius from a certain center point you can use the above, if you can choose one of the points randomly, you need to check some more, because if we have the following situation: 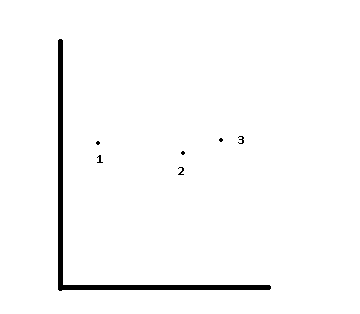 Not the answer you're looking for? Browse other questions tagged linear-algebra geometry circles or ask your own question.

1
Determine center of circle if radius and 2 tangent line segments are given
2
Circle containing three points, maybe all collinear
2
Calculate the closest point to the center of a circle from another circle on its radius.
0
Roundness in Taxicab Geometry
4
Line tangent to circle
1
taxicab geometry
1
construct circle defined by point, radius and enclosed & touched circle
1
Calculating radius of circle based on 2 points on circle