How many Groups there are on a finite set?

Let say cardinality of set S is $n=|S|$.
We know that there are $n^{n^2}$ all binary operations on that set.
To find out how many groups can be created by this set and by those operations, we need not only to know how many associative operations there are on that finite set.
But also this set and given operation must satisfy specific axioms: closure, associativity, identity and invertibility.

So how find out how many different groups can be created on that finite countable set?

Interesting but very difficult question; sadly I don't think that we will see a definite answer to this question. I think it is clear, considering the complexity of the problem, that we cannot hope for a simple formula for general $n$. (In case you don't believe this, a problem which is rather easier than this one: there is an explicit expression (due to Rademacher) for the partition number.). The best I can do is quote the following (taken from Suzuki: Group theory, vol. I., Grundlehren d. math. Wiss., chap. I, §7.): 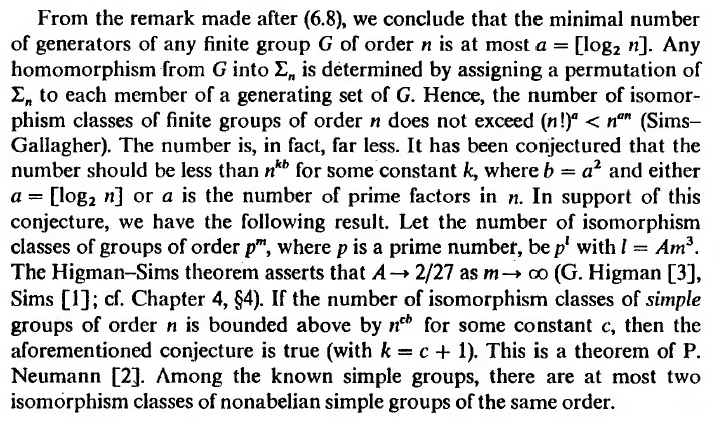 Instead of repeating what he says let me remark that that $\Sigma_n$ denotes the symmetric group on $n$ letters. It should be said that this book is rather advanced, and it seems that even though it is about 30 years old you cannot hope for more than some (crude) estimates. (I include the references which he gives there upon request.)

Not the answer you're looking for? Browse other questions tagged abstract-algebra group-theory finite-groups binary-operations groups-enumeration or ask your own question.

2
How many monoids, groups, etc are there defined on a finite set of size $n$?