Question about proof regarding a triangle and a line.

RFC: I am wondering if my reasoning below works.

Prove: In a plane, if a line intersects a triangle at a point not a vertex, then it must intersect at least one other side of the triangle.

Let us assume a line intersecting one side of a triangle does not intersect any other side of the triangle.

Let there be a (triangle)ABC and a line L that intersects the triangle at point P. Let P be between (segment)AB.

The points A and B separate a plane into two half planes H1 and H2. From the definition of a triangle, one point is non-collinear with the other two points that make the triangle. Thus, point C will lie in either H1 or H2.

Since A-P-B (P is between A and B) with P on L, there is at least one point of L in the interior of (triangle)ABC.

A line has no finite length by definition as that would be a segment. Therefore line L may have a segment from point P longer than the sum of the legs of the triangle. Placing this segment on the same half plane as point C of the triangle, the endpoint opposite P will not lie in the interior of the triangle ABC.

With one side of the segment lying in the interior of triangle ABC and the other outside the interior we contradict our assertion that the line L does not intersect another leg of the triangle ABC.

Therefore, a line through one side of a triangle must intersect at least one other leg.

I think your reasoning is correct, but it's a bit long and not polish. I would suggest this simplified argument based on your idea:

But the perimeter of a triangle is a closed path, and in particular part of it goes from $A$ to $B$ staying away from $AB$. To do so it needs to pass from one partition to the other, and hence it necessarily passes through $L$ again, the intersection point being different from $P$. 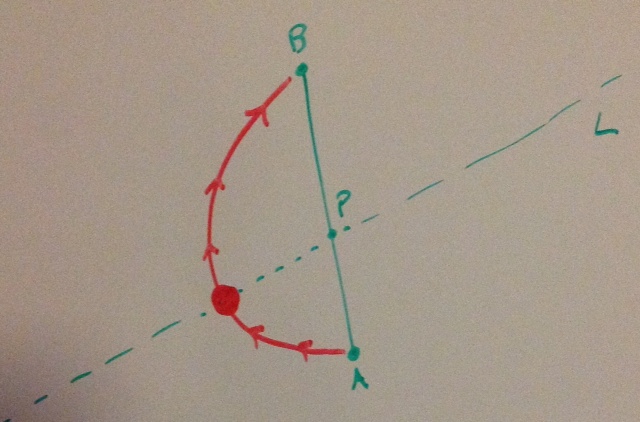 See Pasch's axiom. Basically, most contemporary formal treatments assume that what you are trying to prove is an axiom. If you want it to be a theorem, you'll need some other "plane order" axiom.

0
Line and a triangle never intersect at exactly 3 points - proof verification
4
Question about Pasch's Postulate, line going through all three sides of a triangle
1
problem about Circumscribed circle of triangle
1
Prove In Equilateral Triangle $ABC$ $AM$ and $AN$ are equal
2
Question about bisectors of a triangle and proportionality.
3
Geometric proof - bisector of triangle
1
Proving a simple statement about right angles and tangents
0
Size of a line segment
3
If a point lies outside a triangle, show that there is a line through that point that does not intersect the triangle