It occurs to me that there are two cases. First, when s <= b, the motion of the circle is overshadowed by the expansion, and the final shape ends up being a circle at (0, sN) with radius r+bN. 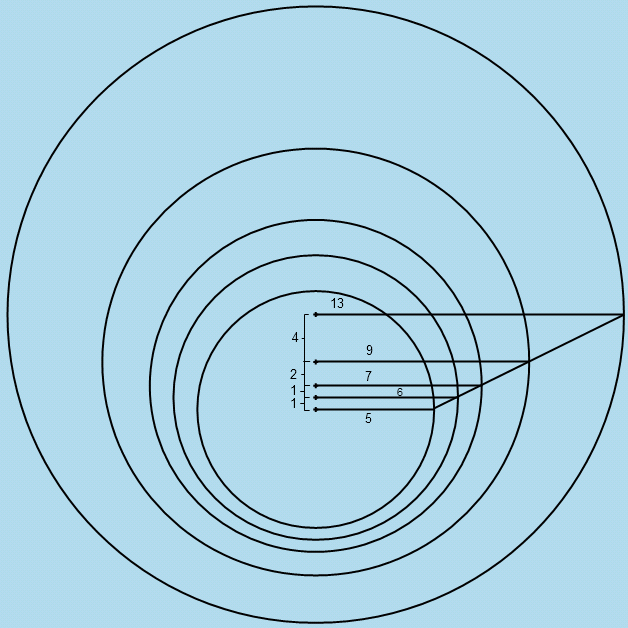 But when s > b, the expansion can't keep up with the motion, and it sweeps a shape through space. It appears to me that the exact shape is that of both circles connected by line segments tangent to both, like two pulleys with a belt. 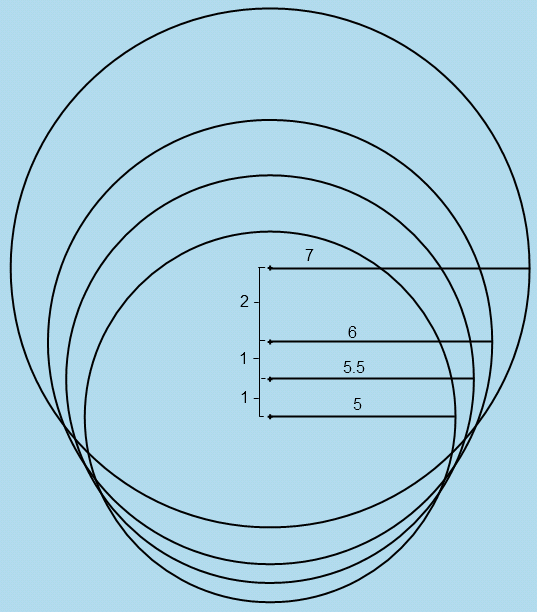 This related question says that it's called the convex hull of two circles. The questioner wants to know how to determine whether a point is within the convex hull. I could also like to know how, but I'd like to have a formula rather than an algorithm. I imagine there must be a formula that describes this shape, but unfortunately, I've been unable to derive one myself. :-/ It would be great if one formula handled both cases, but I'd be happy to have just the formula for case two.

I'd also be satisfied with a formula to determine the distance from the origin to the outer edge of the shape at a given angle. In fact, that is the main thing I would hope to calculate from the formula, in addition to using the formula to plot it.

Does anybody know? Thank you.

The phrase you want to research in general is "envelope of a family of curves". An envelope is a curve that's tangent to each member of the family at some point; in this case, it's the "border" of the shape swept out by your circles (though if your family doesn't extend indefinitely in both directions, you'll want to add circular caps at the top and the bottom).

It happens (as you suspect) that the envelope of your family consists of straight lines, and basic geometry should be able to prove this. However, it could easily have been the case that a more elaborate border curve arises, so I'll talk through your envelope as in this Wikipedia article. Note that the process involves taking "partial derivatives", so is technically an aspect of multi-variate calculus, although knowledge of basic single-variate calculus will do.

First, to reduce the number of parameters involved, let's say that the center moves as speed exactly $1$, and that radius increases at rate $k$. (Effectively, I'm just re-scaling your time parameter and setting $k := b/s$.) Note that, because you have discussed the case of the more-rapidly-increasing radius, we may assume $|k| < 1$.)

The equation of the envelope arises from setting $F$ and $\partial F/\partial t$ (the partial derivative of $F$ with respect to $t$) simultaneously equal to zero. We already know $F$. The partial derivative we seek is simply the derivative where we treat $x$ and $y$ as if they were constants (just as we do with $k$ and $r$).

... vindicating your suspicion that the border of the swept area consists of lines.

Specifically, when $k = 0$ (the circle's radius doesn't change as the its center climbs higher), we have a pair of vertical lines at distance $r$ from the $x$-axis:

When $k \ne 0$, we have the lines with slope-intercept form

All that said, you are now back to your question of finding an equation for the convex hull of your circles. I'll need to come back to this.

I will use the notation of @Day and consider only the right half of the hull ($x \ge 0$). 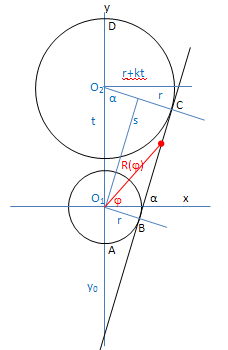 The left half of the hull is obtained by a simple reflection on the y-axis.

It may help you to have a more physical or alternate approach to think about this problem or the method of characteristics also see here too which is used to gain intuition for fluid like or wave like settings (e.g. a boat emitting a wake, a supersonic plane emitting shock waves, cars entering or leaving a traffic jam).

The idea is to plot $x$ (horizontal) vs $t$ (time). First you plot the trajectory of your boat. Then at each position the boat emit waves that travel to the right and left on the plot at the sound/wave speed. To find the area at time $t$ intersected you draw a horizontal line across the plot. Your two situations (where the area you want is a circle and where it is not a circle) correspond to your sound or wave source (the boat) traveling below or above the sound or wave speed. The analogy being that information is emitted at the sound speed and that gives you your circles. I find that these simple plots really help you think about where you get information when.

Not the answer you're looking for? Browse other questions tagged geometry circles convex-analysis or ask your own question.

6
How to test if a point is inside the convex hull of two circles?

6
How to test if a point is inside the convex hull of two circles?
0
What is the equation of the line tangent to two equally spaced circles on the y-axis
0
Does the line connecting the centers of two externally tangent circles contain the point of tangency?
0
Two tangent circles tangent with central circle
0
Formula for Overlapping Area of Two Intersecting Circles When Center of One Circle is on Circumference of Other Circle
0
The distance between the centers of two circles K1 and K2 is 2cm. Determine the surface area of the figure that belongs to both circles.
1
Determine the diameter of a circle with constraints