What are the applications of continued fractions?

Since no one mention it, I think it's really pleasant knowing that every rational tangle correspond to some continued fraction(Conway showed that). 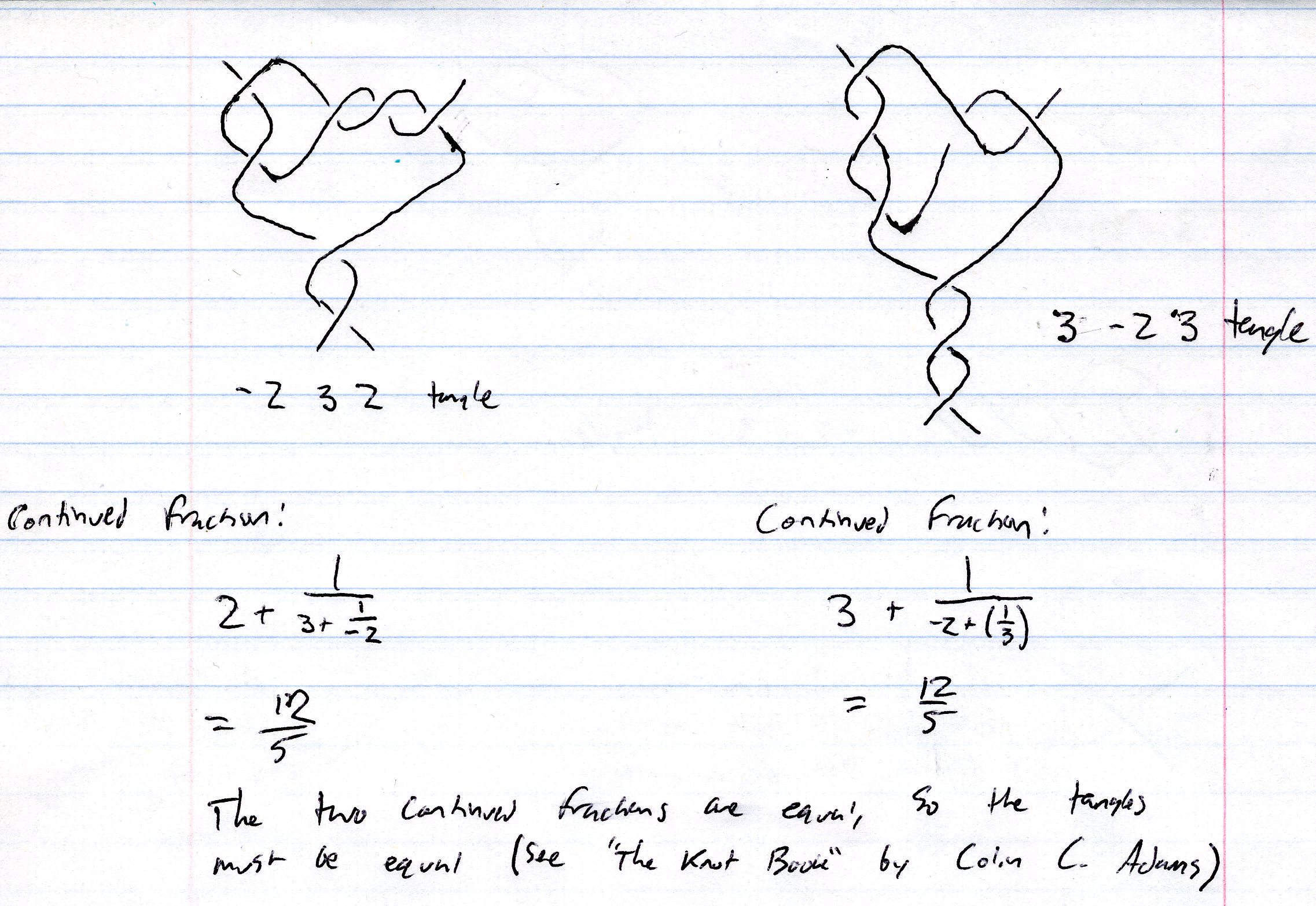 Here are some properties/uses that might be used to motivate an investigation of Continued Fractions:

In this manner, continued fractions offer the best rational approximations to real numbers.

There is this interesting article about the application of continued fractions in Phyllotaxis, the research on leaves, which I found pretty interesting. Maybe you can find more over google? ${}{}{}{}{}{}$

There are at least three integer factorization algorithms based (one way or other) on properties of continued fractions. The one by Lehman is a fairly elementary (but delightfully clever) deterministic method.

These may not be the best ways to motivate continued fractions, but here are some applications.

More recently, continued fractions have come up in studying the dynamics of flows on translation surfaces -- a special case of which is studying billiards in a rational polygon. For example, continued fractions and Diophantine approximations make an appearance in studying billiards in the wind-tree. That is, imagine taking the plane and placing identical rectangular obstacles centered at each integer lattice point. Now consider an ideal point-mass which bounces between the obstacles, reflecting off the obstacles according to the rule from geometric optics that angle of incidence equals angle of reflection. Studying the motion of that billiard (e.g., are there periodic orbits, dense orbits, escaping orbits, recurrent orbits, etc.) can, at least in some special cases, boil down to studying continued fractions. See The Ehrenfest wind-tree model: periodic directions, recurrence, diffusion by Hubert, Leliévre, Troubetzkoy and Divergent directions in some periodic wind-tree models by Delecroix.

Again, those probably aren't the best ways to motivate continued fractions if you're seeing them for the first time, but they do have plenty of applications.

For other applications, one can use continued fraction to solve the Pell's equation or to generate a chaotic process (by the Gaussian map: $x_{n+1}=\frac{1}{x_n}-\lfloor{\frac{1}{x_n}}\rfloor$).

Application #3: As spin wrote in a comment, being able to make a good guess for the value of a rational number when you know only some approximation to it (even if the approximation is itself rational!) is a key part of Shor's algorithm for factoring integers on a quantum computer. Guessing rational numbers from numerical approximations is also important in doing computations related to elliptic curves, as William Stein explained to me: if an elliptic curve $E$ is defined over $\mathbf Q$ and you use complex analysis to compute a coefficient of a Weierstrass equation for $E$, or to compute $L(E,1)/\Omega$, all you get is a decimal estimate for a number that is supposed to be rational and you want to decide what that rational number ought to be (which might then be rigorously proved by other methods). Typically the decimal approximation of the rational number may have far fewer digits than the full period length, so you can't guess the fraction as simply as you can if someone asks you what fraction $.333333333$ probably is (namely $1/3$).

Here is an example of how continued fractions let you guess rational numbers from decimal expansions, which I did as a trick at the end of a talk I gave today on continued fractions. I asked a student in the audience to compute a fraction as a decimal on a calculator and tell me what digits showed up on the calculator, but make sure there was no obviously periodic part shown by the calculator and not to tell me the original fraction and make sure to write down the original fraction for comparison with my guess later. The student gave me $.1391200951$. Using a computer algebra package, I converted $.1391200951$ into a continued fraction: it is $[0,7,5,3,6,1,56891,1,103,2]$. The $56891$ is so huge compared to what comes before that my educated guess for the student's original fraction is $[0,7,5,3,6,1]$, which is $117/841$. That indeed was the number the student wrote down earlier. The audience was impressed. The actual decimal period of $117/841$ is $812$, so I was able to figure out a fraction having a repeating decimal period length over $800$ knowing only the first $10$ digits of its decimal expansion.

But a musician will often want to play a notes that are small ratios of each other because it sounds better. So what are the best rational approximations for $2^{5/12}$ ? Look at the continued fraction:

So we can see that the musician is probably playing a $\frac 43$ ratio. It was obvious for this interval but you can try other intervals.

Two ideas which could be useful for you:

$1$. Proposal: Combine continued fractions with the concepts of golden ratio and fibonacci numbers

I think starting with the simplest continued fraction

offers charming possibilities. With this prototype you can bring together continued fractions with the golden ratio and with the fibonacci sequence as fundamental and beautiful concepts.

You could talk about the mystic pentagram, detect the golden ratio between successive length and diagonals of inscribed pentagrams and reveal the representation of $\Phi$ as continued fraction. You could also talk about golden rectangles and their applications by artists and architects like Le Corbusier and Dali or the classic Parthenon with its many geometric relations resulting seemingly in golden ratios.

I do appreciate the hint from BIS HD. Phyllotaxis as form of evolutionary development which has optimized the positions of the seeds of sunflowers, daisies or pine cones using spirals is a great example how simple and fundamental concepts $[1,1,1,\dots]$ iteratively applied are behind seemingly complex structures of nature. And, counting the number of seeds of successive spirals will give you successive Fibonacci numbers!

$2.$ Proposal: Use continued fractions and lattice paths as picturesque concept

I think, that lattice paths are a fine, picturesque example of an application of continued fractions. Lattice paths are structures we can see and we can look what happens, when they are manipulated.

Here I would like to point to a wonderful presentation of continued fractions summarizing the contribution to this subject of the great Flajolet and also providing some historical aspects. For me this is a superb (and funny!) example to familiarize the audience with continued fractions. At least the first part of this presentation could also be useful for your needs. On page $149$ you will find a reference to a (rather complex) real life application in theoretical physics Planar maps and continued fractions from J. Bouttier and E. Guitter.

This article by Carlo Sanna, based on lectures by Michel Waldschmidt in the Proceedings of the Roman Number Theory Association contains common applications of continued fractions, some of which can be used as motivation.

Not the answer you're looking for? Browse other questions tagged elementary-number-theory continued-fractions motivation or ask your own question.