Is there a useful definition of minors for digraphs?

For an undirected graph, my "intuitive" understanding of a minor is that I take a subgraph, partition it's vertex set into connected subsets and contract each subset into a single vertex.

If I try the same definition with a directed graph (=digraph), I have the problem that there is a distinction between weakly connected and strongly connected. Even so I saw a definition where connected was simply replaced by weakly connected during my research for this question, such a definition doesn't seem to be very useful, or at least doesn't coincide with my "intuition" about what a minor for a digraph should be. What I don't like about that definition is that there might exist more directed paths after the contraction of the subsets into single vertices than there were before.

Has anybody seen a definition of minors for digraphs that better matches my "intuition"? Any references to a book or paper (even if not available online)? Of course, I don't mind if the concept isn't called "minor", I just care for the concept itself.

In general there is no "official" generalization of edge contraction to digraphs:

This is a quote from the objectives of "New Trends on Structural Graph Theory" 09/2010:

In more specific cases it seems that individual researchers tend to pick and choose a definition of digraph minor that seems the most natural for their particular problem. See here, here, and here (if you have access) for three published works each using their own version of the edge contraction operator.

One thing to consider is that you can use vertex and edge deletions to create graph minors, and by carefully pruning first you can then contract vertices without creating additional edges or loops. 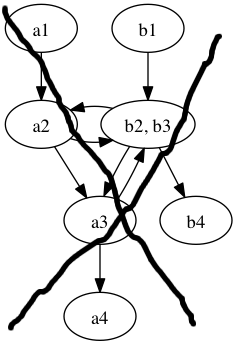 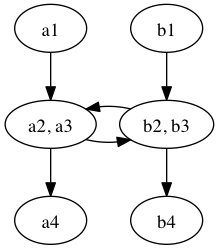 Edit 1 It may be a good idea to restrict contractions to weakly connected subsets, so I slightly modified the definition of an M-graph (which is intended to formalize my "intuition"):

Here a walk on a digraph $G=(V,E)$ is a sequence $v_0, v_1, \ldots, v_n$ of vertices from $V$ such that $(v_i,v_{i+1})\in E$. The image of a walk under a function $\varphi$ is the sequence of the images of the vertices of the walk, where identical successive vertices have been replaced by a single vertex.

This gives the following definition of a minor for a digraph:

There are cases where this definition allows more minors than my "intuition": 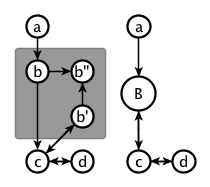 There are also cases where all subsets must be contracted at the same time, showing that incremental constructions contracting one edge or subset at a time won't work (in general) for this definition of digraph minor: 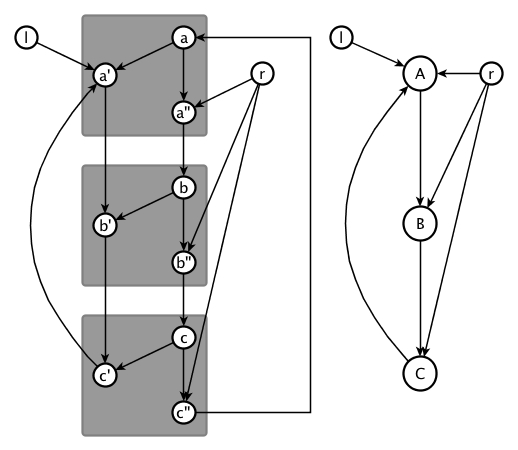 Edit 2 The above minor relation is not a well quasi ordering, as shown by the following counterexample:

Maybe it's not such a good idea after all to restrict contractions to weakly connected subsets. But even without this restriction, it's unclear whether the corresponding minor relation would be a well quasi ordering.