What are some real world applications of Fourier series? Particularly the complex Fourier integrals?

It turns out that (almost) any kind of a wave can be written as a sum of sines and cosines. So for example, if I was to record your voice for one second saying something, I can find its fourier series which may look something like this for example

and this interactive module shows you how when you add sines and/or cosines the graph of cosines and sines becomes closer and closer to the original graph we are trying to approximate.

The really cool thing about fourier series is that first, almost any kind of a wave can be approximated. Second, when fourier series converge, they converge very fast.

So one of many many applications is compression. Everyone's favorite MP3 format uses this for audio compression. You take a sound, expand its fourier series. It'll most likely be an infinite series BUT it converges so fast that taking the first few terms is enough to reproduce the original sound. The rest of the terms can be ignored because they add so little that a human ear can likely tell no difference. So I just save the first few terms and then use them to reproduce the sound whenever I want to listen to it and it takes much less memory.

JPEG for pictures is the same idea.

I can say about these applications.

For a very specific example: One of our undergraduate students was taking data generated by a person running on a force plate. Since force exerted on your feet from running is for the most part periodic, she fit the data with a curve using Fourier analysis. The work that followed can be used to help develop better running shoes.

Here is another very-specific example that I do not know much about.

One of the big problems in bioinformatics/computational biology is "lining up" DNA sequences to reveal mutations, additions, and deletions between them. This becomes an astronomical task when dealing with a large number of long sequences. To date, the fastest and most accurate program for this task is MAFFT (which stands for Multiple Alignment by Fast Fourier Transform): http://mafft.cbrc.jp/alignment/software

Another variation of the Fourier Series to compare DNA sequences is A Novel Method for Comparative Analysis of DNA Sequences which used Ramanujan-Fourier series. The idea is the same as the Fourier series, but with a different orthogonal basis (Fourier has a basis of trig functions, R-F uses Ramanujan sums). Other orthogonal basis are Walsh–Hadamard functions, Legendre polynomials, Chebyshev polynomial, etc.

Regardless of the orthogonal basis used, one of the practical applications is signal / data analysis. The transformation / decomposition into a sum of coefficients times basis functions, allows you to do either or both of:

fourier series is broadly used in telecommunications system, for modulation and demodulation of voice signals, also the input,output and calculation of pulse and their sine or cosine graph.

Although I'm not sure how much this has been used recently: shape analysis of closed curves for character recognition.

On the other hand, spherical harmonics, which are a Fourier series on the sphere, have been and still are used extensively for shape analysis in medical imaging.

Hiss and pop in sound recordings can be cleaned up using Fourier analysis. What is static but a super-high frequency sound--higher than most sounds that normally appear in music and speech, etc. When a time-domain signal is represented in the frequency domain, i.e., as a sum of sine waves, you can cure the static by simply erasing all the highest frequencies and then reconstituting the sound.

Exactly the same trick works in removing speckles from photographs. The boundaries between the photo and the speckles are the highest frequency components of the image. Using Fourier analysis to you can drop all the highest frequency components. Then reconstitute the picture, and like magic, speckles are gone. Some minor features you might want will be gone too, but in practice it works very well.

The opposite works for finding outlines in a picture. Erase everything but the high frequencies, and when you reconstitute the picture, you will have all the outlines and the broad areas will all be erased.

Numerous image processing techniques are variations on this theme.

My answer is not about real world application, but about a real mechanical machine that was capable of graphing Fourier Transforms. In both senses, analysing and synthetizing a signal. 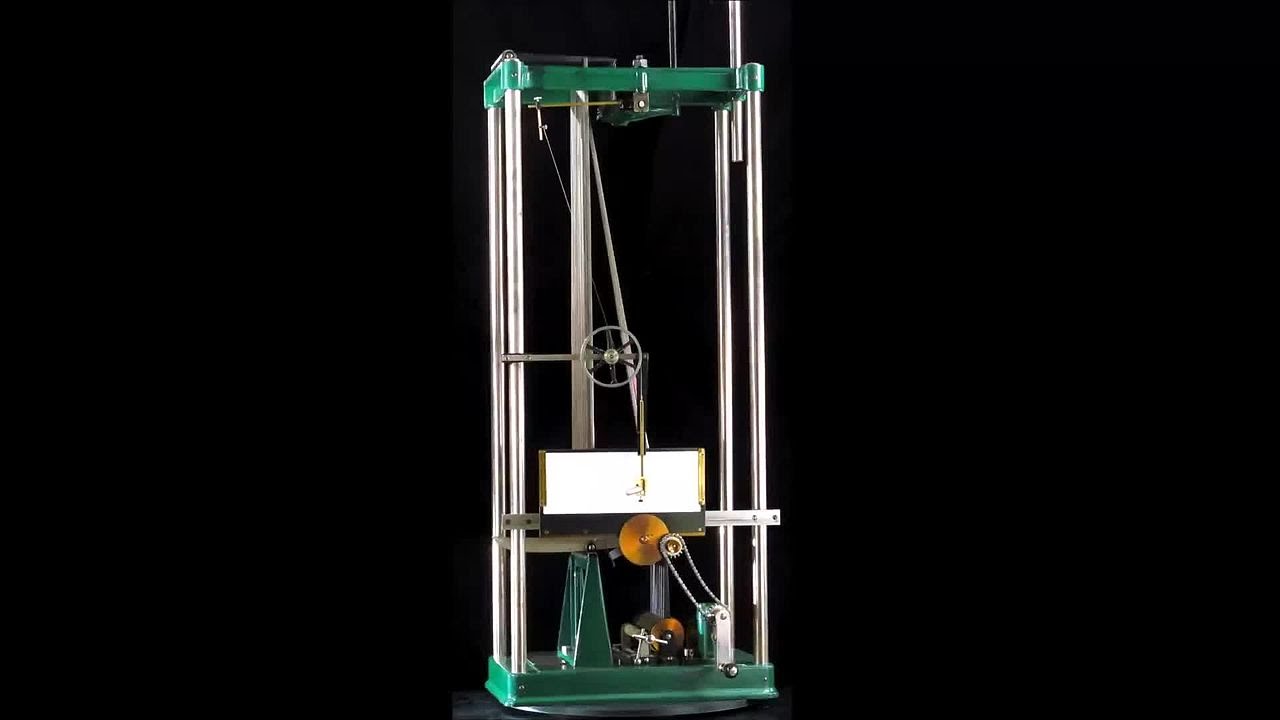 I also discovered there is an instructables project on http://www.instructables.com/id/Plywood-Math-Machine/ about building one

This application was mentioned at https://math.stackexchange.com/a/579457/53203 but I'd like to give it a bit more emphasis and a high level motivation.

This application is important not only for practical reasons (PDEs are important for physics obviously), but it also has particular historical relevance as it is apparently what initially motivated Fourier, so we can imagine that it will be simple and intuitive.

I will be skipping over a few minor details, but the full derivation can be found here: https://en.wikipedia.org/wiki/Heat_equation#Solving_the_heat_equation_using_Fourier_series This technique is called separation of variables.

What we will find out is that solving the heat equation is equivalent to calculating the Fourier transform of the initial condition $F$.

Consider the heat equation for a one dimensional rod of length $L$:

The method of separation of variables starts with a guess that the solution has the form:

Trying a solution of this form is just a guess, and initially we have no reason to be sure it will work out.

By plugging the guess that into the equations, and doing simple manipulations, we determine that $T$ and $X$ can be any solution of:

These are just simple ordinary differential equations that we know how to solve! Given the boundary conditions, the solutions are:

We could then plug those back in the equation to confirm that our separation of variables guess does give possible answers.

Because the equation is linear, multiplying a solution by a constant or adding two solutions together is another solution, so we reach a general solution form of:

where we are free to chose the constants $D_n$. If each $D_n$ is chosen, we have a specific solution.

which is basically the Fourier series decomposition of $F(x)$!

Therefore, all we need to do to solve the differential equation is calculate the weights $D_n$ of the Fourier series of the initial condition, and then just plug them into the general $f(x,t)$ formula and we are done!

A big question that comes up then is that of completeness: can we approximate any initial condition $F$ well enough by just a bunch of sines? If we couldn't, then this approach wouldn't be very useful!

But luckily the answer is yes for a very wide class of functions that satisfies most of our needs.

I think in $L^p$ this is guaranteed by Carleson's theorem:

Previously, we discussed the heat equation. But separation of variables and the Fourier transform can be used solve other very important PDEs as well, which makes this method even more important. E.g.:

We radio hams have developed new modes of digital communication that use discrete Fourier transforms to extract signals that are so deeply buried in noise that the human ear would not notice them. This allows communication with very low power (at reduced speed, of course). This is similar to what the SETI program does in its search for bug eyed monster civilizations in outer space. (So far they haven't admitted to finding anything.)

Not the answer you're looking for? Browse other questions tagged fourier-analysis fourier-series signal-processing applications or ask your own question.

428
Fourier transform for dummies
335
What is the importance of eigenvalues/eigenvectors?
19
"Every function can be represented as a Fourier series"?
7
Proving that the Fourier Basis is complete for C(R/$2*\pi$ , C) with $L^2$ norm
6
Applications of Fourier analysis for math students
3
Is there a Mathematics Database to find specific formula's meaning in real world?
2
Fourier Series Real life application
0
Why are Fourier series important?
0
fourier series of unknown functions