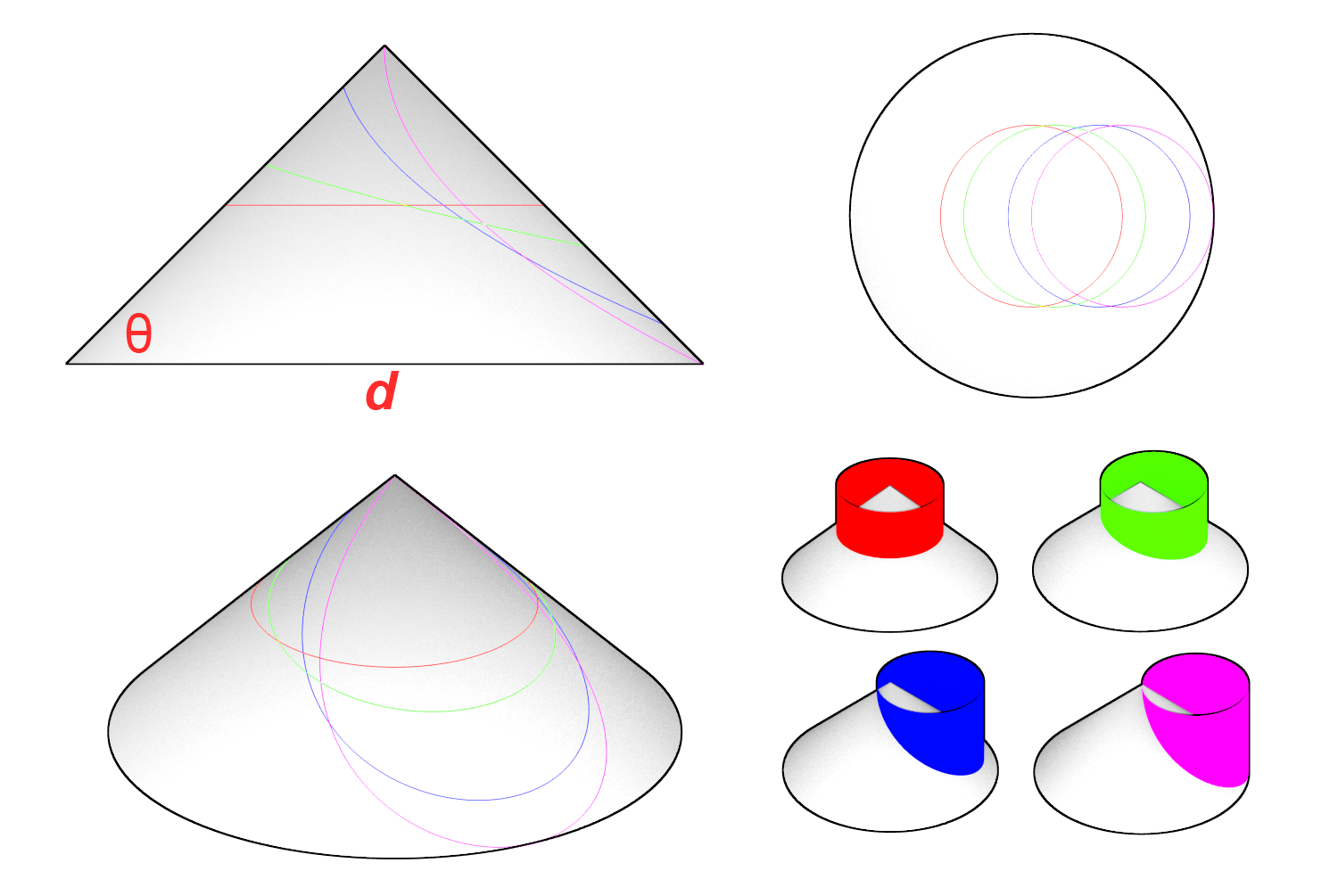 Please pardon me if I don't use the correct terminology. Part of why I cannot solve this problem is that I don't even know what to research!

Given a circle placed on top of the cone, the shape drawn on the cone is not a simple conic section, it's a weird shape I'm not familiar with and I don't know what it's called.

The goal is to calculate the volume above the cone with any arbitrary placement of the circle. In the diagram above I've simplified things by only changing the offset of the circle in one dimension, but I'd like to know how to calculate for two dimensional offsets as well.

The red circle is placed directly in the center of the cone. Assuming we know $\theta$ and $d$ we can calculate the area above the red cross section as the conic volume minus the volume of it's contained cylinder:

I'll assume you want the volume above the plane on which the cone sits and below the inverted cone. I'll also assume that the circle bounding the vertical cylinder is viewed as drawn in the $x,y$ plane with its center at $(a,0)$ and a radius of $r_2$, in such a way that the entire bounding circle of the cylinder lies inside the big circle bounding the bottom of the cone.

Now a parametrization of the region inside the circle bounding the vertical cylinder is given by the set of points $(a+t \cos \theta,t \sin \theta)$ where $0 \le t \le r_2$ and $0 \le \theta \le 2\pi.$ Setting up polar coordinates on this circle to do the integral for volume means we have to use the polar volume element $t dt d\theta$ in the integral.

You should now be integrating the height up to the cone multiplied by the polar area element, over the region inside the smaller circle. Except for the issue of keeping notation straight, this integral is easy to set up and I'll leave that to you.

When I plugged the double integral into maple the closed form results were extremely messy, and one of the two iterations involved a nonelementary function. So maybe the best thing is to just set up the integral, and use numerical methods to approximate it in particular cases.

3
Why is the landing footprint an ellipse?
2
Finding the volume of a cone by integration of parabolic conic sections
3
Super conic sections?
3
Visualisation of ellipse as conic section
0
Cross-Sections of Solids
2
cross section of a cylinder
1
Visualizing what part of the surface is integrated by surface integral
3
Locating the focus, vertex, and directrix of a conic when viewed as a plane section of a cone
0
Conic section. Equation of section plane in 3d.