If we have a feasible space for a given LPP (linear programming problem), how is it that its optimum solution lies on one of the corner points of the graphical solution? (I am here concerned only with those LPP's which have a graphical solution with more than one corner/end point.)

I was asked to take this as a lemma in the class, but got curious about the proof. Any help is sincerely appreciated. 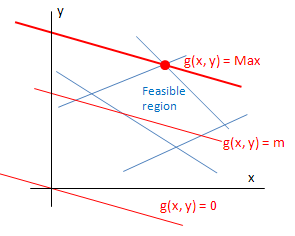 Jiri's answer gives the intuitive explanation. Formally, the fact that an optimal solution lies at an extreme point is a consequence of the representation theorem for polyhedra and the fact that the feasible region of a linear program is a polyhedron.

It's a special instance of the following general theorem:

The maximum of a convex function $f$ on a compact convex set $S$ is attained in an extreme point of $S$.

An extreme point of a convex set $S$ is a point in $S$ which does not lie in any open line segment joining two points of $S$. In your case, the "corner points of the graphical solution" are the only extreme points of the feasible region. It's easy to see that the feasible region of a LPP is convex. It's not always compact, and some LPP indeed have no solution despite having a nonempty feasible region. The linear objective function is clearly convex. If it is minimized instead of maximized, this can be reformulated as maximizing the negative objective function.

I quite like the cited theorem, because it highlights that optimization can lead to problematic results for a large class of situations (because a solution at the boundary of the feasible region will become infeasible under perturbations, so it is not a robust solution). It's also similar to the bang-bang principle in optimal control.

Not the answer you're looking for? Browse other questions tagged optimization linear-programming or ask your own question.