Terminology re: continuity of discrete $a\sin(t)$

This question is specifically about the terminology used to explain a particular problem and its solution, not the math itself. I am a programmer, I am not really a math person, but I have at least an intuitive understanding of the concepts I frequently encounter in computer graphics.

Recently a friend was doing some computer animation work that involved a sine wave with an amplitude and period that were functions of time. Let's call value $V$, amplitude $a$, period $p$, time $t$. He ran into a classic problem where he was doing:

With $t$ set to the elapsed time since the start of the program, i.e. $t=t_\text{now}-t_\text{start}$. The problem, of course, is that as $p(t)$ changed, all sorts of artifacts were visible and the sine wave did not smoothly transition in apparent speed. He asked how to solve this problem. I explained to him that he instead needed to work with the current phase instead of absolute time, incrementing each frame based on the period, like so (initializing $t$ to 0):

Then I awkwardly launched into some explanation (that ultimately required a pen and paper) about how you want to "smoothly move around the circle, incrementing so that changes in speed don't jump to far away positions" rather than "jumping between graphs of sine waves of different frequencies" or something. In the end he got it, and fortunately he intuitively understood what I was trying to say, but I did a really poor job of explaining it.

So my first question is, and apologies if this is asking too much, but how would you explain this to somebody, succinctly, using proper math terms? I realize there are many answers, but currently I know 0 answers. How can I explain to somebody why incrementing the phase based on $\Delta{t}$ and $p(t)$ leads to continuity, while calculating the value based on the total elapsed time doesn't?

My second question is this: My friend then asked me, "do I need to do the same with amplitude?" The answer is no (assume that the "continuity" of $a(t)$ is "good enough"). I couldn't explain why, though. I mean, intuitively, I knew why, and I said, "No. I don't know the math term for it but the $a(t)$ is outside the $\sin()$ so it works out." What are the words I was looking for there? How can I explain to somebody that $a(t)$ doesn't suffer the same problem as the $t/p(t)$ did? I know it has something to do with the way $\sin(x)$ varies with $x$, but I don't know the proper way to describe it.

My third question is that at some point during this process I was explaining why the two equations above were identical for a constant $p(t)$. My explanation involved something like, "Well, I mean, the elapsed time is the same as all of the delta times added together, so you can see if you pull these terms out of the $\sin()$ and increment instead, the value is the same." Even typing that, it makes very little, if any, sense. On paper I wrote:

Is the same as:

Is the same as:

When $p(t)$ is a constant function.

... but I couldn't explain why. How can I explain to somebody that incrementing by deltas every frame is the same as the difference between the current frame and the first frame? Is there some terminology that fully encapsulates this so that an example is not necessary?

Heck, I don't even know what the fundamental problem is called, I always just refer to it as an "artifact" in a generic sense.

How would you explain this problem and its solution to somebody?

Note: I realize I am liberally interchanging "time" (i.e. seconds) and "phase" above -- this is really just another symptom of my inability to express these thoughts clearly.

I have created two JavaScript demos that try and illustrate the problem:

The first example is a more typical case in my experience. The second example shows the problem very sharply and may be more illustrative.

The "non-working" strategy treats the constant period $k$ as an algebraic parameter (and replaces it by a non-constant function $p(t)$), rather than as a reciprocal rate of change, $2\pi$ divided by the derivative of $P(t) = 2\pi t/k$.

Amplitude, by contrast, is simply the magnitude of $a(t)$, so the "incorrect" scheme for period "works" for amplitude.

To make this more self-contained, I'll paraphrase the two pairs of example results linked in the OP. 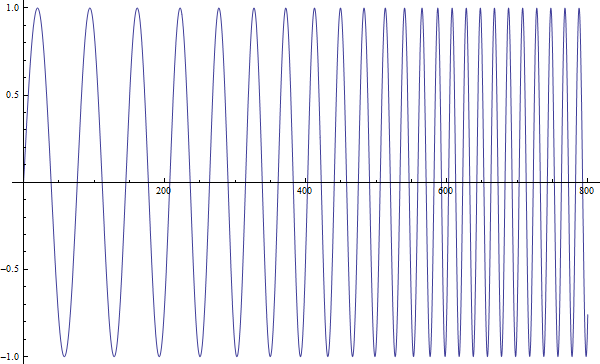 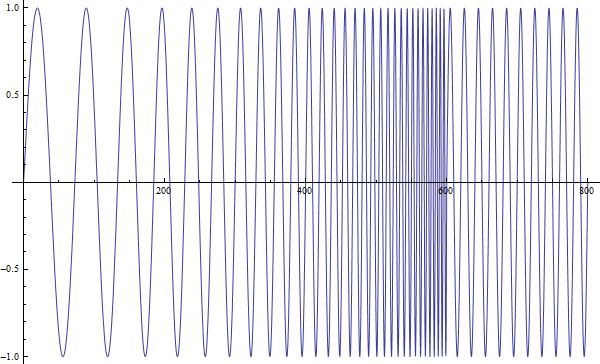 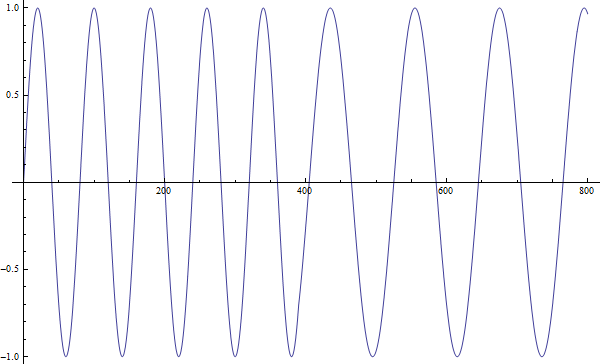 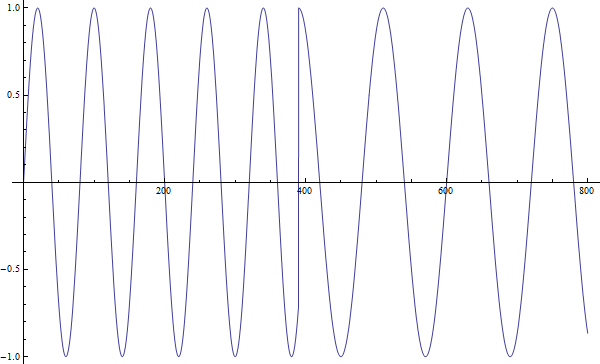 The examples in the OP made it clear what we're looking for on an intuitive level, but what does "a sine wave where period is a function of x" really mean? For it to be called a wave at all, it better be continuous. But to have a "period" at a particular time, we need to figure out a way to detect the period of a sine wave based on local information, and we can use that as our definition. I claim that if $|f'(t)|$ at the point is the same as the derivative of the sine wave of appropriate period $p$ when that sine wave is at height $f(t)$, then we should say "the period of $f$ at $t$ is $p$" (note that when $f(t)=\pm1$ then $|f'(t)|=0$ and "the period at $t$ is $p$" is true for all $p$).

Justification for claim (you can skip this if it's geometrically intuitive):

1a. Why does the good method work?

The OP said "Essentially the correct approach is something like computing a discrete integral, maybe." Indeed, the result of adding $(\Delta t)/p\left(t\right)$ to $t$ at each stage (for small $\Delta t$) is an approximation to $\int_{0}^{t}1/p\left(\tau\right)\,\mathrm{d}\tau$. The good method is approximating a function like $$f(t)=\sin\left(2\pi\int_{0}^{t}\frac{1}{p\left(\tau\right)}\mathrm{d}\tau\right)\text{.}$$ For the period to be correct, we expect that to have derivative (at least up to a sign change) $$\frac{2\pi}{p(t)}\cos\left(2\pi\int_{0}^{t}\frac{1}{p\left(\tau\right)}\mathrm{d}\tau\right)$$ at every point of continuity of $p$, and by the chain rule and the fundamental theorem of calculus, we can see that it does. Furthermore, the sign of $f'$ doesn't suddenly flip because even though $p(t)$ suddenly changes at points of discontinuity, it's still positive everywhere, and the cosine part is of the derivative is continuous because integrals like this of reasonable functions are always continuous (see Lemma 6.1 in these lecture notes).

But what about if $p$ is constant on two sides of a jump discontinuity? Then $sin(2πt/p(t))$ will likely be discontinuous there. That's a different problem with the bad method compared to what I explained above, which covers the first example but didn't really explain the step function example.

First note that if $a(t)$ is constant and positive, you can just stick $a$ in front of all the formulas above and nothing really changes. Now, the OP's examples both had $a=1$, but I'm going to assume the goal is things that still look like sine waves. The solutions discussed above are sine waves with minimum $-1$ and maximum $1$, so if we want to stretch/squish things vertically at the input $t$ by a factor of $a(t)$, we replace $y$ by $y/(a(t))$ (just like horizontal stretch by a constant factor is replacing $t$ with $t/p$). But $y/(a(t))=\sin(\text{whatever})$ is equivalent to $y=a(t)*\sin(\text{whatever})$. It's not like horizontally stretching which could mess up nearby points; we do this at every $t$ independently, so there's nothing else to worry about.

Bonus: How could we find all good methods?

Let's forget about this discrete situation for a second, and ask ourselves the following: Suppose that $p(t)$ is some piecewise continuous, strictly positive, function. Which continuous function(s) $f(t)$ with $|f(t)|\le1$ have period $p(t)$ at every point of continuity of $p$ and signs of the left and right derivative match up wherever $p(t)$ is discontinuous? We can break this up into two parts: solving the problem for continuous $p$, and stitching the solutions together for other $p$.

A standard way to discretize the above exact solution is by replacing the integral in the above along the lines of $$\int_{0}^{t}\frac{1}{p\left(\tau\right)}\mathrm{d}\tau\rightsquigarrow\sum_{k=1}^{t/\Delta t}\frac{\Delta t}{p\left(k\Delta t\right)}\text{.}$$ But that's just the "right-hand sum". You could use the left-hand sum or a trapezoidal rule or Simpson's rule, etc. Now that we know that the exact solution involves an integral, we can use any simple or advanced method for approximating that integral.

The term I think your looking for is 'change of variables'. However (as you admit) your phrasing and notation makes it hard to see. I'll write out here what I think you want to do and can edit it if its wrong.

You have the function $$ V(t)=a(t)\sin\left(\frac{2\pi t}{p(t)}\right) $$ and you want to plot it by considering a set of values $t_n$ where you get from one to the next by $$ t_{n+1}=t_n+\Delta t_n $$ and $\Delta t_n$ is your step size which might vary. The function changes rapidly in some areas and slowly in others, specifically is second derivative, you plot straight lines and thus it is the rate at which the function deviates from the straight lines that causes you problems when considering constant step size.

Rereading your question there are several things wrong so I'll try to tackle them, I think I've already answered your first one.

Increasing the value by a small increment must be the same as the total time elapsed. A full text-based explanation would be tricky, but if you draw a time-line with all $t_n$ marked on then the difference between two adjacent is a step, and the total between beginning and current times as the sum of all steps. Just draw the picture!

I think you have ended up with a programme which plots a function different than the one you want to. Notice that the difference between 'correct' and 'incorrect' in your examples is more than just plotting accuracy. The 'incorrect' method plots the correct function poorly and the 'correct' method plots the incorrect function poorly. Youve just done it wrong! Try making the adjustments here and see what happens.

Not the answer you're looking for? Browse other questions tagged discrete-mathematics terminology continuity or ask your own question.

0
Calculating the next value of sin(x) from previous sin.

13
Difference in terminology between Let and Assume?
0
Statistics with discrete math
1
Permutations and Discrete Math
3
Terminology: The difference between $X$'s convention
0
Why do we multiply by 10^-9 here?
0
Simple discrete math question
0
Epsilon-Delta Proof of Continuity for $\sin(x^2)$
0
DTFT of odd function?