I have been experimenting with some 19th century picture development techniques that involve photochemical image projection: For flat pictures you first mix equal parts of chemicals like ferric ammonium citrate and potassium ferrocyanide and apply the resulting solution with a black foam brush onto a sheet of mate paper--allowing it to dry afterwards. Then you print a negative of the black-and-white image you want on to a clear acetate sheet, and you place the sheet on top of the chemical-laden mate paper and clamp it betwixt a Masonite sheet--or something similar--and a glass sheet. After you've clamped this all together you let the contraption sit in direct--orthogonal--sunlight. The light that passes through the white areas on the negative will eventually photoreact a color change (blue) on the mate paper.

This process works nicely because the layers are all flat, however, I would like to do this with a three dimensional object instead of mate paper. In my mind I tell myself that all I'd need to do is correct the negative image in Photoshop--and perhaps with a secondary program--to get the corresponding--what I'm calling--anamorphotic projection.

What I'd like to achieve with this idea of mine is a projection from a two dimensional image--with whatever necessary alterations--to a three dimensional surface so that when I look at the thing after it's reacted the image will conform to the surface and not be distorted. I was hoping you might offer some advice as to what exactly it is that I might look out for, or what exactly it is that might shoot for. 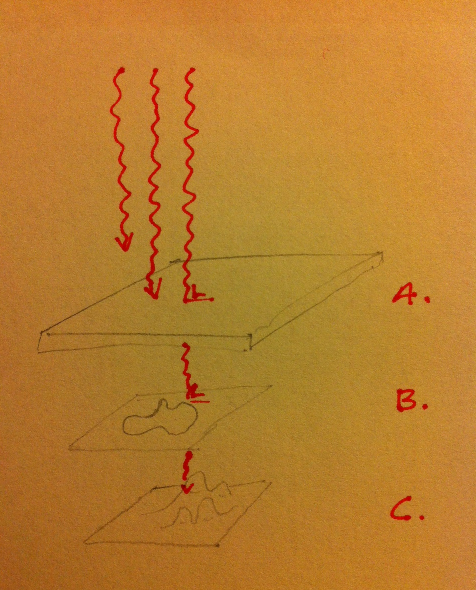 In the illustration above, $A$ is the glass sheet, $B$ is the acetate print out, and $C$ is the chemical-coated, three-dimensional object. I suspect that what I'm asking for will be quite difficult, but I have a CAD file of the object--it looks nothing like that in the illustration. Of course, $A$, $B$ and $C$ will all be put as close together in the eventual run of the project. I'm wondering if perhaps this question is more optical/physics-related than mathematical. I mean, if light is coming through the glass, what is the trajectory after that on to the surface? I'm wondering how flaring might effect the projection due to the distance between the glass and the object--provided it's not a flat surface.

Browse other questions tagged linear-algebra image-processing orthonormal stereographic-projections or ask your own question.

0
Dimensionality in Projections
5
Compute the image intensity on a spherical surface under orthographic projection
1
Projection of 4D sphere to 3D - focus point
0
calculate surface normal using light
1
Is Euler characteristic of a binary image truly a topological invariant?
0
How do I mathematically model the changes in the shape of a circle projected onto non-flat surfaces at different angles?