How do I prove the following statement is a tautology, without using truth tables? $$[¬P ∧ (P ∨ Q)] → Q$$

Is there a way of proving $\;[¬P ∧ (P ∨ Q)]\rightarrow Q\;$ is always true without using any truth tables, instead can it be solely proven by words/logic? Or am I just being dumb?

As you note, if $Q$ is true, then the implication is true.

Hence, the implication is a tautology.

So, this is probably a silly approach to this sort of thing, but I hate truth tables and take a slightly more circuitous route through what Quine referred to as "alternational normal form". @amWhy cast the antecedent of the conditional in alternational normal form above, but casting the entire sentence into that form gives a pretty clear test of tautology. The drawback is that alternational form can get very long.

On a more complicated sentence we would make use of the distributive properties of alternation and conjunction to make sure we have a chain of alternations of conjunctions. In this case, we have it in a single step above: $P\vee(\neg P\wedge\neg Q)\vee Q$. By changing the order of our alternated elements and adding back in parentheses, we see we have $(P\vee Q)\vee(\neg P\wedge\neg Q)$ or $(P\vee Q)\vee\neg(P\vee Q)$, an obvious tautology.

The thing I like about alternational normal form is A) the resulting sentence is clear, if cumbersome and B) can show a tautology or inconsistency by an extremely syntax-focused method of evaluation.

In either case we have shown that $Q$ holds.

Alternatively, we can start with the antecedent, and try to simplify:

So Q contradicts, it says that is false and at the same time is says that is true. Because of this, we know that this WFF(well formed formula) is a tautology! 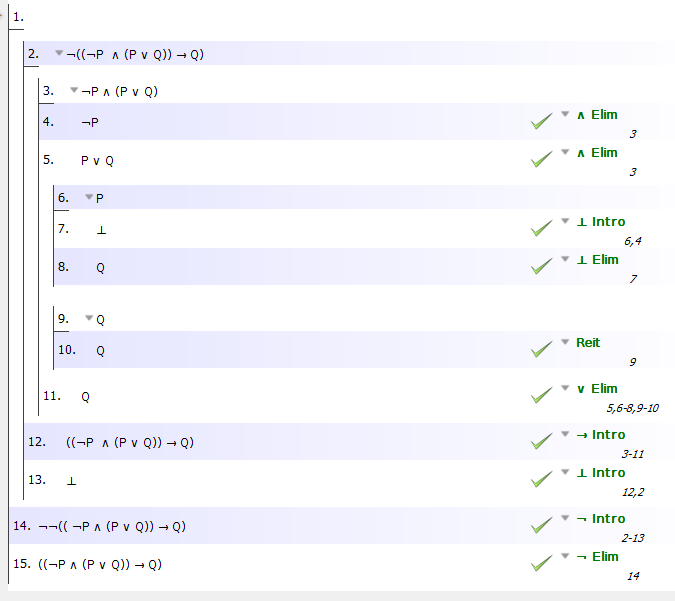 Using a Fitch style proof, this tautology can be proved by contradiction. Assume the statement is false, show that this assumption entails a contradiction, then negate the assumption.

That's not correct. If you assume Q≡F (I'm not assuming ≡ as a logical operator here), then it follows that

(p∨F)≡p, since (T∨F)≡T, and (T∨T)≡T. Or in more algebraic terminology we can say that "F" is the neutral or identity element for ∨.

[¬p∧(p∨F)]≡(¬p∧p). From here I think you can complete this sort of proof.

Additionally, I'll add that you could have considered the cases where P holds false, and P holds true. In which case you'll similarly end up using "F" as the neutral element for ∨. In this way, the truth value of a disjunction of two propositions behaves like the maximum of two natural numbers (and in general this holds also).

A3 CCNpKqNqp - negation out - No

A4 CKpqp - conjunction out left - Kol

A5 CKpqq - conjunction out right - Kor

A6 CpCqKpq - conjunction in - Ki

A7 CCpqCCrqCAprq - disjunction out - Ao

Via the relevant deduction meta-theorem which SD and RVP enable, we have conditional introduction as a derivable rule of inference, which I'll denote as Ci. The only other rule of inference I'll use is C-detachment or C-d

Not the answer you're looking for? Browse other questions tagged logic propositional-calculus or ask your own question.