Was Grothendieck familiar with Stone's work on Boolean algebras?

In short, my question is:

Was Grothendieck familiar with Stone's work on Boolean algebras?

In an answer to Pierre-Yves Gaillard's question Did Zariski really define the Zariski topology on the prime spectrum of a ring? I let myself get carried away and explained a result of Grothendieck that (for me) implies that Grothendieck certainly was familiar with Stone's work on spectra and even proved theorems with it. Qiaochu suggested that I ask a question and answer myself (apparently officially encouraged, see his remark), so I'm doing that in order to avoid an off-topic answer to Pierre-Yves's question.

But again, one will not find any reference to Stone in the work of Grothendieck, even though his use of the word 'spectrum' is an obvious echo of [Stone 1940], and Grothendieck, with his background in functional analysis, must have been familiar with Stone's work in that field.

I did not seriously try to verify or falsify the first part of the sentence (and please do provide references if you happen to know of them). My own long answer addresses the second part of the sentence and tries to make a point that must have been should be replaced by was.

Now fire away and complain about this being a nitpick, but I'm trying to explain a nice and interesting piece of mathematics and both Jonas Meyer and Qiaochu Yuan said I should post this answer, so: that's what I'm doing here.

[...] Grothendieck, with his background in functional analysis, must have been familiar with Stone's work in that field.

cited by Qiaochu reveals a gap in the knowledge of Grothendieck's work (which is of course nothing to be blamed for, given its vastness and ramifications in so many fields) but it also misses a link to one of Grothendieck's beautiful theorems in functional analysis. I'd like to make the point that

not only was Grothendieck well aware of that work, he even exploited it!

The crucial reference is his article Une caractérisation vectorielle–métrique des espaces $L^{1}$. While Grothendieck does not cite Stone, he relies crucially on Nachbin's paper A theorem of the Hahn–Banach type for linear transformations, improves on that paper and exploits the main results in a serious way. This is only possible if you understand these results profoundly. Nachbin in turn cites three works of Stone, see references 4,5,6 below.

To prevent a possible criticism of that argument, let me note that Nachbin and Grothendieck knew each other well. Grothendieck spent some time in Brazil and even planned to write a book on topological vector spaces with Nachbin:

see Allyn Jackson's Notices article on Grothendieck, part 1, p.1044. It could seem conceivable that the results were orally transmitted and that Grothendieck never looked at that paper. However, to such an objection I'd respond: you have to take into account that Grothendieck asserted the main results of that work earlier but he later discovered that his arguments had a serious gap. Given that he had to work rather hard to fix it, it seems quite implausible to me that he never took a closer look at Nachbin's work and missed the work of Stone cited in there entirely.

Secondly Grothendieck refers to two works of Kakutani (references 8 and 9) below, which in turn refer to Stones works 4 and 5 and rely on it, too.

In conclusion I think it is safe to say that Grothendieck not only "must have been" but actually "was" aware of Stone's work (Edit: As Didier Piau pointed out in a comment this is still inconclusive, but please see the update at the end of this post).

I'm now parting from the historical ramblings and make an attempt at a description of Grothendieck's result in a way that I hope is appealing to algebraists. For the actual work, please consult the MathSciNet review and the paper itself.

Further References: It don't know of many self-contained expositions of the results I mention below. The classification of "injective" Banach spaces (called $P_1$-spaces in the classical literature) can be found in Day's booklet Normed Linear Spaces as well as in H. Elton Lacey's The isometric theory of classical Banach spaces. For a categorical view on Banach spaces please consult the Book Banach modules and functors on categories of Banach spaces by Cigler–Losert–Michor. I take the liberty and refer to Part 2 (Chapter IV) of my thesis for further facts, references and details.

Recall that Grothendieck's thesis was called Produits tensoriels topologiques et espaces nucléaires which is a masterpiece of its own and even mentioning its ramifications to the theory of distributions would lead us too far astray—the first line of the MathSciNet review reads: Le grand nombre de résultats importants contenus dans ce mémoire (Thèse), rend difficile d'en mettre en évidence les lignes essentielles, même si l'on a recours au résumé des résultats publié auparavant [...]. Incidentally, one characteristic of that work is that quite often the statement of theorems span more than a page while the proofs only take a couple of lines or are dismissed with a mere "Preuve: évidente."

Note: The scalar field is of course flat (it is the tensor unit) and it is injective (that's equivalent to Hahn–Banach).

Using this language we have:

Theorem (Grothendieck). A Banach space $F$ is flat if and only if $F$ is isomorphic to a space $L^1(\Omega)$ where $\Omega$ is some measure space.

The other direction needed much more insight. I won't elaborate on precisely what Grothendieck did, but here's what it comes down to morally, from the skewed perspective I adopted in this part of the answer so far:

The theorem in 2. (due to various efforts by Akilov-Goodner-Kelley-Nachbin) is seriously deep. A feeling for this can be obtained by noting that the easiest example of an infinite Stonean space is $K = \beta \mathbb{N}$, the Stone–Čech compactification of the natural numbers. Suffice it to say that the space $K$ arises from the geometry of the unit ball of an injective Banach space, which is strongly related to lattice theory and Boolean algebras, hence the link. Note also that Stonean spaces are called thus because they arose from Stones study of spectra of Boolean algebras.

Note that by the Riesz-Kakutani representation theorem the space $C(K)^\ast$ is the space of measures on $K$. Now given a flat Banach space $F$ it embeds into $F^{\ast\ast} = C(K)^{\ast}$ and Grothendieck needed to recover it from the fact that he knew only that $C(K)$ is a dual space. He did that by identifying the space $F$ with the normal measures on $K$ and this does involve a deep understanding of the Stonean spaces.

Added: I forgot to mention one further punchline: Grothendieck also proves and makes use of the fact that a $C(K)$ space which is a dual space can be realized as a von Neumann algebra (in the spatial definition, of course). In remarque 3 he states:

Of course, this is nothing but giving the outline of the proof of the celebrated Sakai theorem that characterizes von Neumann algebras as precisely those $C^{\ast}$-algebras which are dual spaces as a Banach space. Those acquainted with Sakai's theorem will of course recognize that this is exactly how Sakai proceeded and indeed the "seule difficulté" in the proof... but I digressed enough. Let me stop by remarking that Sakai's paper was submitted while Grothendieck proofread his paper and I'll finish by quoting him:

In the paper Sur les applications linéaires faiblement compactes d'espaces du type $C(K)$ we find Stone's paper Applications of the theory of Boolean rings to general topology listed as reference 14. It is mentioned only once as a mere reference for the Stone–Čech compactification at the very end of the proof of Proposition 6 (b):

Here's the bibliography of that paper: 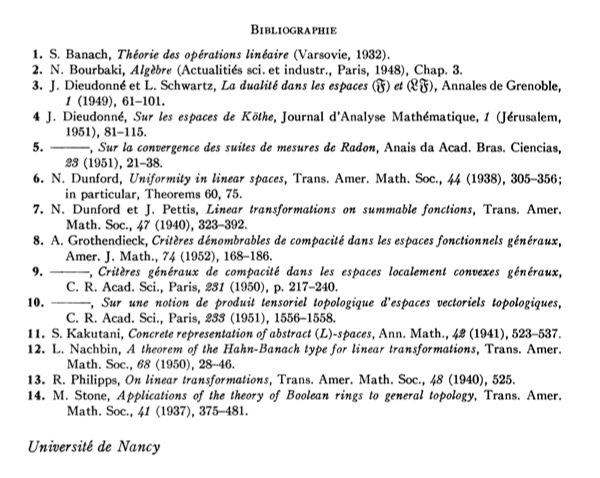 I'd like to emphasize that my intention of this post was by no means to debunk anything Johnstone writes (and as a matter of fact: I didn't!): the excerpt provided by Qiaochu explicitly speaks of Grothendieck's work on Algebraic Geometry a bit before. I merely wanted to point out that there was an interesting link that may not be as widely known as it deserves to be.

For me the above settles the matter whether Grothendieck was aware of Stone's work. Whether he was familiar with it, particularly with the aspect of spectra, it is probably something he alone could answer, unless a more specific reference is provided. However, I hope I have succeeded in making the point that he was familiar enough with the contents that he could prove a beautiful theorem with it.

Not the answer you're looking for? Browse other questions tagged functional-analysis category-theory banach-spaces math-history tensor-products or ask your own question.

22
Did Zariski really define the Zariski topology on the prime spectrum of a ring?
11
Do continuous linear functions between Banach spaces extend?
1
Complementability of von Neumann algebras