What is the proper geometrical name for a a rectangle with a semi-circle at each end?

I'm talking about the shape made up of a rectangle with a semi-circle at each end. Does it have a particular name? Does it begin with e?

Obround, apparently. I don't know Wiktionary's source. This definition of obround does not appear in OED, for example. Googling indicates that this definition is commonly used for machine parts having this shape.

I'm pretty sure they actually use four clothoid arcs joined together in practice, e.g. this. This has a lot to do with the fact that the clothoid is the curve whose curvature is directly proportional to its arclength; an abrupt variation in curvature would equate to an abrupt variation in centripetal force, which can be bad for the racehorses (or even racecars, for that matter). 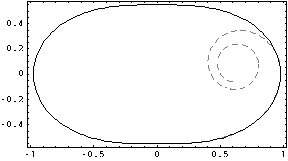 Just to show that the bends are honest-to-goodness clothoids, I drew the clothoid corresponding to the lower right portion of the track in full (the dashed gray one).

The parametrization used is

where $C(x)$ and $S(x)$ are the Fresnel integrals; I leave you to verify using those expressions that the curvature of the clothoid is indeed directly proportional to the arclength.

An oval. Racetracks, arenas, stadiums and round pens have one things in common - the shape, and the animals who use them at different speeds. The spaces are created based upon the strides of an animal creating velocity and balance as they move through their gaits of walk, trot, lope/canter to gallop. These forces can be seen in action during any training such as round pen training or barrel racing where the rider uses the shape, spacing and pattern angles to achieve speed and then cuts back, creates a circle and curves in speed to the next barrel. I believe it is called an oval, but then again I am just a cowboy. :)

It is is same shape as filled parachutes.

The differential equation of Cornu Spiral by J.M. is not a mathematician is ( $s$ is arc ):

and the Bermuda Bottle (not sketched) is

They are similar in appearance. Clothoid curve has a third order discontinuity at sharpest corners.

Not the answer you're looking for? Browse other questions tagged geometry definition or ask your own question.

12
Name of shape with constant distance to a line segment
3
What is the shortest line around two equally sized circles called?

8
What is the name for a shape that is like a capsule, but with two different radii?
2
What's the name of each pseudo-rectangle in a spherical surface?
3
Terminology: name for integer "factor" of a rectangle?
4
If a tesseract is to a cube what a cube is to a square, what is to a sphere as a sphere is to a circle? What about rectangle, ring, triangle?
1
What is the precise name of this quadrilateral?
0
The Name of a Polyhedron with 6 Quadrilateral Faces, 8 Vertices, and 12 Edges
0
fitting a rectangle into a semi-circle
3
What is the name for this subset of concave shapes?
6
"Cuboid" not the correct name for 3d rectangle?