Expected values in a sequence

We draw 2 numbers from a normal (gauss) distribution with mean $\mu$ and variance $\sigma$ and we add them to find the first value $a_1$ of a sequence. The second value $a_2$ of this sequence is the product of $a_1$ and 2 other numbers randomly drawn from the same probability distribution. The third value $a_3$ is the product of $a_2$ by 2 other randomly drawn numbers, and so forth....

What is the expected value of $a_n$?

Here is a plot of a very simple simulation where $a_n$ equals $a_{n-1}$ multiplied by a number drawn from a gaussian distribution with parameters $\mu=2$ and $\sigma=0$ for the red line and $\sigma=0.5$ for the blue line. I can run this simulation 100 times, in 95% of the cases, I get this kind of pattern. Therefore it seems that the variance is important to predict a value in a sequence. Is it correct? 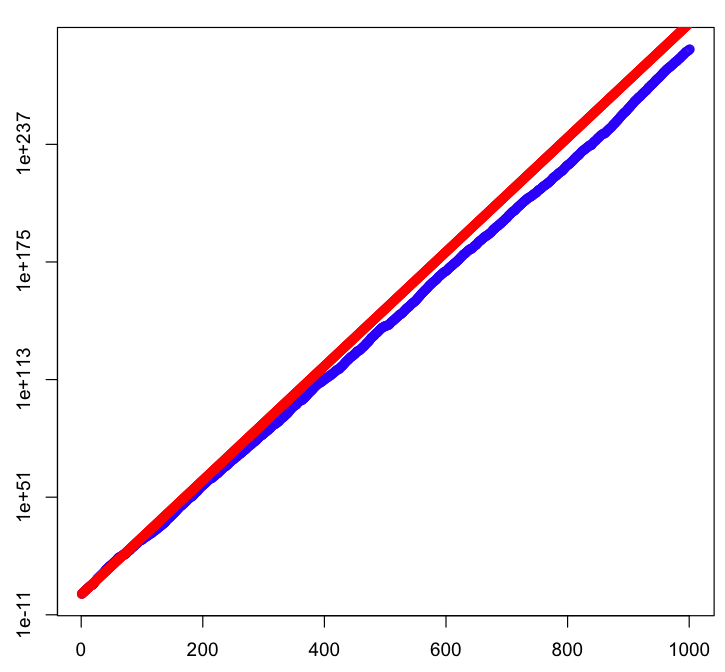 As already mentioned, $E[a_n]=(2\mu)^n$ for every $n$, whatever the variance is. An explanation for the deviation observed in the simulations might be the following (although I fail to see how the graph in the post could represent any sequence $(a_n)$ generated as the OP explains, since almost surely $a_n\lt0$ for infinitely many $n$... unless one plots $|a_n|$ and not $a_n$?).

Not the answer you're looking for? Browse other questions tagged sequences-and-series probability-distributions expectation or ask your own question.

0
What is the effect of the variance on a sequence of cumulative product?
0
Product of randomly drawn numbers

4
Can an expected value (mean) be higher than the values used to create it?
0
What is the effect of the variance on a sequence of cumulative product?
1
Weighted sum of identical distributed random variables
3
Making a sequence of random variables converge almost surely to $0$
4
Period of a binary sequence