Why are two definitions of ellipses equivalent?

In classical geometry an ellipse is usually defined as the locus of points in the plane such that the distances from each point to the two foci have a given sum.

When we speak of an ellipse analytically, we usually describe it as a circle that has been squashed in one direction, i.e. something similar to the curve $x^2+(y/b)^2 = 1$.

"Everyone knows" that these two definitions yield the same family of shapes. But how can that be proved?

Suppose we have a classical ellipse with its two foci and major axis given. We want to prove that it's a squashed circle.

Select a coordinate system with its origin in the center if the ellipse, the $x$-axis passing through the foci, and a scale such that the common sum-of-distances-to-the-foci is $2$. The foci have coordinates $(\pm c,0)$ for some $c\in[0,1)$.

Thus every solution of (1) is a solution of (2). On the other hand, for every fixed $x\in(-1,1)$, it is clear that the left-hand-side of (2) increases monotonically with $|y|$ so it can have at most two solutions, which must then be exactly the two solutions for $y$ we get from (1'). (And neither equation has solutions with $|x|>1$). So the equations are indeed equivalent.

Conversely, if we have a squashed circle with major and minor axes $2a$ and $2b$, we can find the focal distance $2c$ by $c^2+b^2=a^2$ and locate the foci on the major axis. Then the above argument shows that the classical ellipse with these foci coincides with our squashed circle.

It's easy to show that projection of a diagram at an angle is the same as stretching. Let $E$ be a stretched circle, then it is not hard to find the corresponding angle s.t. $E$ is the projection of a circle $C$ at that angle.

And there is a classical proof showing that the intersection of a cyclinder with a plane is an ellipse with focis, see @Element118 's answer. 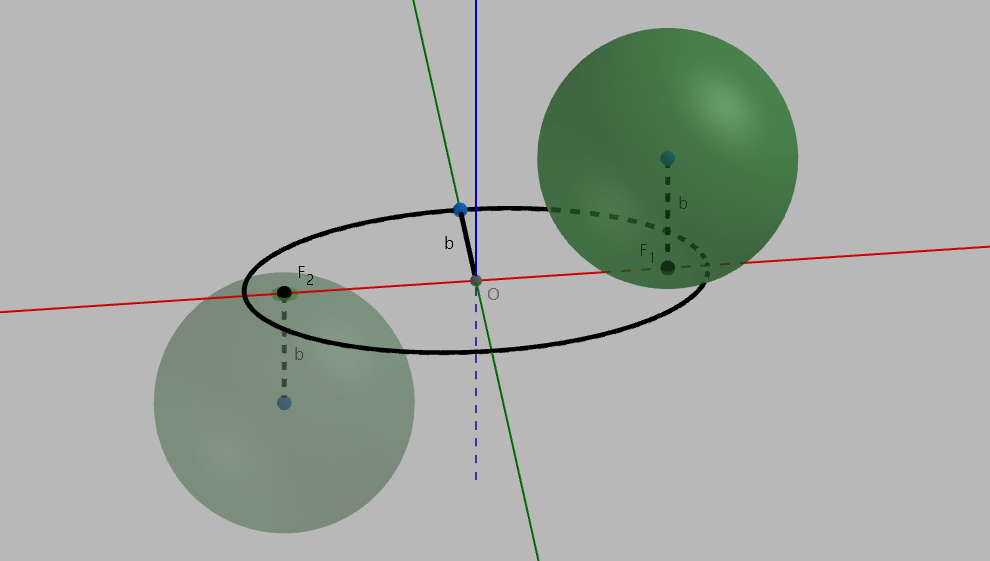 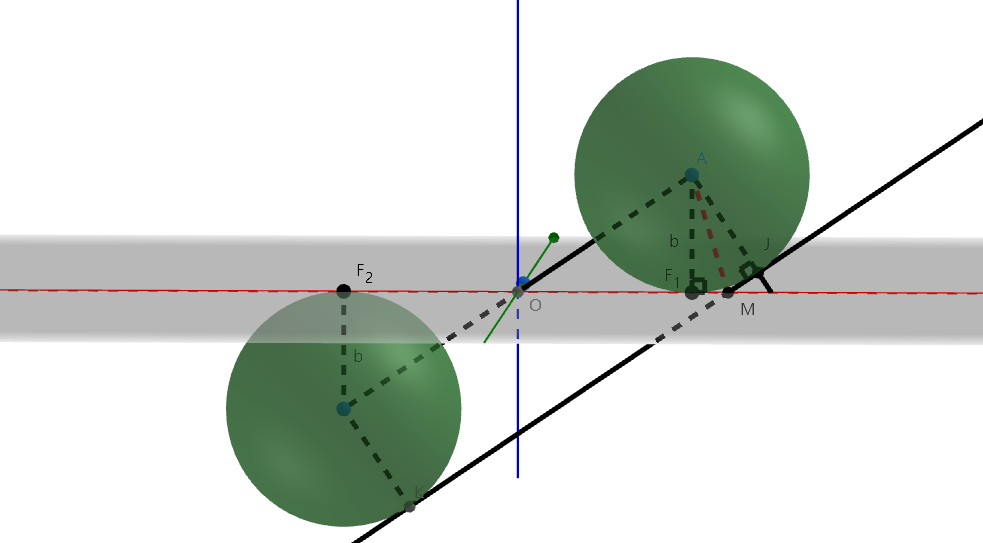 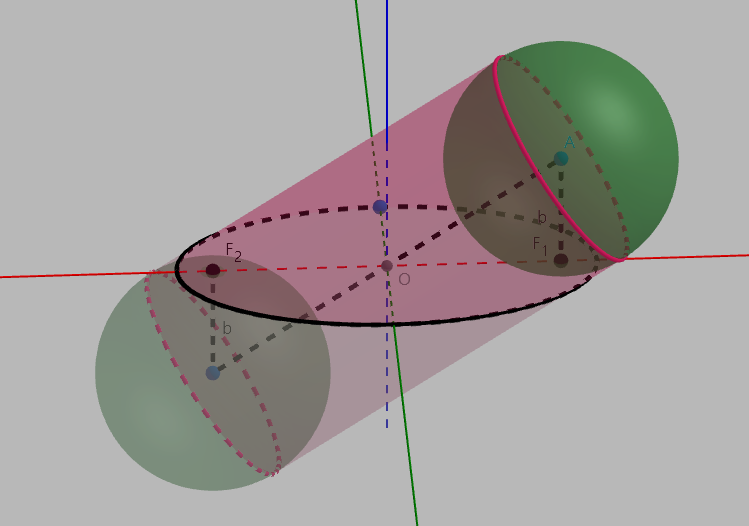 And we clearly have that $E$ is the projection of a circle, which is the same as a stretched circle. The result follows.

From 3Blue1Brown, at about 9:40, expanding the comment from @Paul Sinclair into an answer.

The spheres are tangent to the cylinder, touching the cylinder at a circle each. These circles are perpendicular to the axis of the cylinder.

6
How do we deduce that an ellipse, when defined as a "stretched circle", has foci?
11
On The Construction Of An Ellipse
0
Is there visual or intuitive explanation of equations of conic sections defined in traditional way?
1
Intersection of a plane with an infinite right circular cylinder by means of coordinates
1
How to see and proof that the hyperbola as a constant difference of distances holds for $\frac{1}{x}$?

37
What are curves (generalized ellipses) with more than two focal points called and how do they look like?
4
Focus-Focus Definition for a Parabola
1
How many non-collinear points determine an $n$-ellipse?
6
Equivalence of geometric and algebraic definitions of conic sections
12
Prove that the directrix-focus and focus-focus definitions are equivalent
3
What are these 3D shapes, if anything?
4
Geometric proof of equivalence between two constructs of ellipse
13
History of definitions for an ellipse?
0
Is there visual or intuitive explanation of equations of conic sections defined in traditional way?
0
Equivalence between ellipse definitions