Maximum area of a square in a triangle

I did some research. I found that in the case of right triangles, there seemed to be only two kinds of squares being formed. One with a side of $\frac{ab}{a+b}$ and the other of $\frac{abc}{c^2 + ab}$, $c$ being the hypotenuse.

After some time, I realized that there was a common formula for all triangles. And that is: 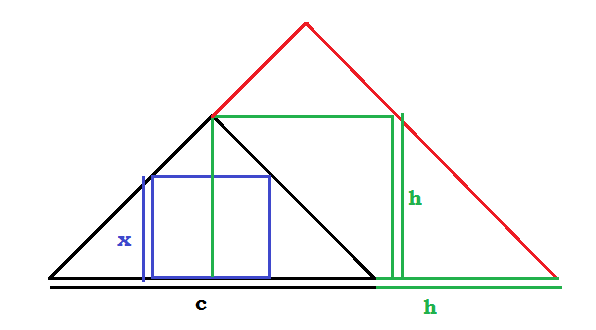 I achieved the above results using similar triangles, and have added a figure, to make the point clear. But that is all, I can prove. I tested for many triangles, and found that the smaller side always yields the larger square, but I am not able to prove it. For example, I can say that the largest square of a $4,7,10$ triangle, has area of approximately $\fraq{16}{3}$. I also want to make another conjecture (with an intuitive proof) that any triangle will give at most three squares.

So I want to ask you, are my calculations, proofs ... correct? Have I got them right? And those predictions? Are they right, and if so, proofs? Conclusively, do we have a sure-fire formula to get the area of the largest square?

There is a famous book of Polya ("How to solve it"), in which the problem of inscribing a square in a triangle is treated in a really interesting way, I strongly suggest the reading.

Not the answer you're looking for? Browse other questions tagged geometry triangles area maxima-minima quadrilateral or ask your own question.