I currently have a tree diagram that shows the probabilities for certain paths in a game. The tree diagram first branches into four possibilities and then another four possibilities for each of the beginning four, making a total of sixteen possibilities (numbered outcome 1 - 16). I would like to know the proper mathematical notation or term to address the "root" of the branches that lead down to outcome 4 - 8. I have called the starting point of the whole tree diagram the "root" so I feel like it is confusing to term the branches of outcomes 4 - 8 that merge as another "root". Currently I am referring to its probability as "P(Outcome 4|8)" but is that an acceptable way to refer to it?

Edit: Now that I learned the definitions, my problem is that I do not know how to call the node on the 2nd level that branches out into leafs (outcomes which are on the third level) 4 to 8.

Trees are actually mathematically well-defined objects and have various pleasant properties and definitions associated with them. What you're talking about is probably better called a Directed Acyclic Graph, which is slightly different from a tree, but not in any important respect for this problem. A sketch of your tree would help me out quite a lot, but here's a picture of one that we can talk about to fix some definitions. 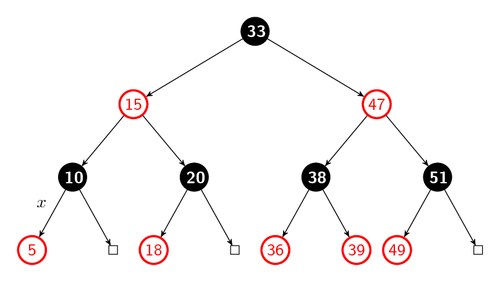 The circles are each referred to as nodes or vertices. The lines between them are edges, and the edge between nodes 10 and 5 is labelled or weighted with $x$. Each of the nodes at the bottom - 5, 18, 36, 39, 49 - is called a leaf. The node at the top - 33 - is called the root. Each stratum of nodes in the tree is called a level, though conventions for numbering levels differ. The level containing only 33 is either the $1^{st}$ or the $0^th$ level. You say that the branches of outcomes 4-8 "merge", presumably into a single node. This kind of node doesn't really have a name, but you can name nodes as you like.

A sketch of your graph and a better statement of your problem would let me edit this into a better answer, but this will probably get you started on the terminology.

Not the answer you're looking for? Browse other questions tagged probability terminology or ask your own question.

0
Infinite Search Tree Probibility
6
What is a mathematically rigorous justification for multiplying edge probabilities of a tree diagram
7
simulating a fair six with a four equal sector spinner
5
What is the expected number of steps in a random walk from leaf to leaf in a full binary tree?
0
Bayes Rule Problem with Counting Balls?
6
Conditional probabilities with impossible outcomes
1
Why does the binomial formula use multiplication?
0
Counting tree nodes that end probabilistically
1
Random Draw from Equal Numbers of Balls of 4 Colours: Probability of 2 of One Colour and 1 each of Two Other Colours
1
Average size of a probabilistically sprouting tree?