I'm trying to essentially prove that the interior angles of a triangle add up to 180 degrees. However, I'm trying to prove it without mentioning measurements of an angle. I think I understand the proof, but I'm having a lot of trouble with the syntax and how to word even what I'm trying to prove. Will somebody give me advice on how to improve my proof? The definition of the word "supplementary" that I'm using says that two angles are supplementary if they share on side and the other sides are opposite rays. Here it is:

1) Given a triangle ABC (by incidence Axioms 3 and 1) we arbitrarily choose vertex A, and (by Euclidean's Parallel Postulate) find a line through A parallel to BC. Let l be the line through A such that $l \parallel BC$.

4) Then DC and BE are lines transversal to l and $\line BC$. (by definition)

10) F*A*G by construction, so by Betweenness Axiom 1, GAF is a straight line.

Therefore a straight line is congruent to the sum of the interior angles of a given triangle.

I know, it needs work. How do I word what I'm trying to prove? I don't want to say that the sum of the interior angles is a straight line because they are not all on the same line. Does the way I worded it make sense?

You may want to draw it out to understand it. I don't know how to attach a diagram. Thanks!

[I'm working on editing the question. Need to go find some mathjax codes...] 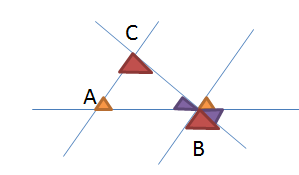 Look at the 3 angles. They form a straight line at point B and are equal on the triangle because of the parallel lines.

I lack the English terms, but I hope it's clear enough

Diagram from wikibooks may be useful just after Example 1: http://en.wikibooks.org/wiki/High_School_Trigonometry/Angles_in_Triangles#Triangles_and_Their_Interior_Angles
and attaching it in your post could be like this: 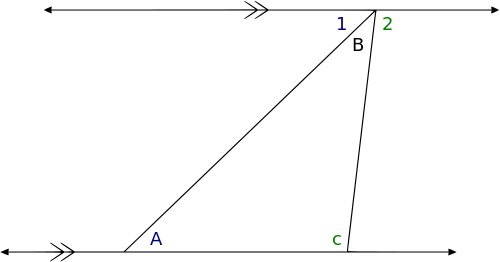 Not the answer you're looking for? Browse other questions tagged geometry proof-writing proof-verification or ask your own question.

2
Prove there exists a triangle without using Euclidean Parallel Postulate
4
Prove that the straight line joining the middle point of the hypotenuse of a right angled triangle to the right angle is equal to half the hypotenuse.
1
Without using angle measure how do I prove two lines are parallel to the same line are parallel to each other?
2
Is this proof reasonable, given this information?
0
showing subtraction of angles from addition of angles axiom in geometry
0
Why is a exterior angle of a triangle equal to the sum of the opposite interior angles?
1
Prove that the dual (ie, “midpoint polygon”) of an isosceles trapezoid is a rhombus.
0
How is a straight line defined by angles in a two-column proof?
1
Triangle congruence when the longest sides, the largest angles, and one of the other sides are congruent?
2
Proving (via Hilbert's axioms) that, when two parallel lines are cut by a third line, they make congruent angles.