The value of pi is determined by the circumference of a circle.

Why is it any particular constant number? Would a circle as defined as a perfect circle in any universe lead to a different value of pi?

Would all universes where a circle could be constructed by "people" there also lead to the value of pi?

If it is true then it leads to the conclusion that pi is some sort of constant value constant to all universe. What is the meaning of that?

In science fiction pi sometimes has a different value in different universes, for example Greg Bear's "The Way", it says "Gates are capped with cupolas formed from Space-time itself. As distortions in space-time geometry, their nature can be calculated by 21st century instruments laid on their 'surfaces'. The constant pi, in particular, is most strongly affected.".

A message is found encoded within pi, in the novel by Carl Sagan, "Contact" "Ellie, acting upon a suggestion by the senders of the message, works on a program which computes the digits of pi to record lengths in different bases. Very far from the decimal point (1020) and in base 11, it finds that a special pattern does exist when the numbers stop varying randomly and start producing 1s and 0s in a very long string.".

Physically, the ratio of a circle's circumference to its diameter $C/d$ is not really $\pi$. General relativity describes gravity in terms of the curvature of spacetime, and roughly speaking, if you take $(C/d-\pi)/A$, where $A$ is the circle's area, what you get is a measure of curvature called the Ricci scalar.

Another way of looking at it is that $\pi$ is not the $C/d$ ratio of a physical circle, it's the $C/d$ ratio of a mathematically idealized circle that exists in certain axiomatic systems, such as Euclidean geometry. Viewed this way, it doesn't matter that our universe isn't actually Euclidean. 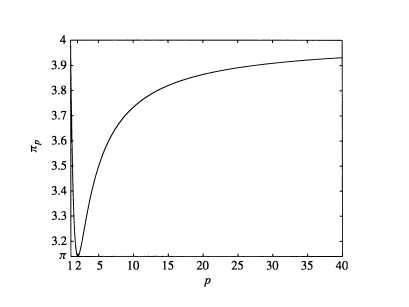 That there will be a number $\pi$ is a mathematical fact. But whether the significant number would be the same is a more interesting question. Some people in our own universe would prefer that the constant had been chosen to be $2\pi$ i.e. $6.28 ...$ instead of $3.14 ... $ as it would reduce the number of factors of 2 in some formulae.

It would also be possible to imagine, in a higher dimensional universe, that the basic round object might be, say, a 3-sphere, with the significant constant would be defined in relation to its geometry rather than the geometry of a circle.

Living in a world which was non-euclidian (e.g. on the surface of a sphere) would make other numbers geometrically significant, but there would still be $\pi$ = $3.14 ...$ sitting in the background.

When I think of different 'universes,' I imagine places that are fundamentally different than our own. Because pi is just the ratio of the circumference to the diameter, that won't change so long as the behavior of the 'metric of the universe' doesn't change.

But suppose that we considered the 'taxi-cab universe,' where the pertinent metric is the taxicab metric (which I have also called the Manhattan Metric, which is nicely alliterative). In such a universe, a circle looks to us to be a square. But within the metric, a circle with radius 4 would have circumference 32. So taxicab-pi would be 4. How nice and even.

I used that as an example, but really it's still just a mathematical creation. One could more or less analyze many different geometries, topologies, manifolds, etc. And to each might be associated some different way of relating a 'circle' (whatever that may mean) to the metric.

No measuring arc lengths with a tape measure. No concept of rotation. Not a trig function in sight. This or any of many other definite integrals could be your mathematical definition of pi.

The problem starts with your first sentence .. which most probably coming out of definition Pi=C/D . There is not problem with this definition , problem is in the value of Pi which we use . This value which we use has nothing to do with this definition at first place ,which not many students ever realized . We approximate C by straight line segments and then this approximation is divided by radius ,or diameter. The definition for the value we use should by totally different to not confuse students. Not even calculus is proving Pi , calculus uses Pi as main ingredient . You can't prove Pi by Pi . Another thing is that main formulas like C=DPi , or AC= Pir^2 have not prove . I am not talking about deriving those formulas , but prove of results by those formulas. So your question is a bit misleading, because we don't even know value of number Pi in this universe :) .

About Contact: if $\pi$ is normal in base 11 (never proven but almost surely true), the "special pattern [...] of 1s and 0s in a very long string" will appear an infinite number of times... but also any finite string, long or short.

if so, pi would be a good way to accurately measure the density (or local density) of the universe.

What if every alternate universe had its own unique frequency f and/or wave number k? Then π = kc/2f. The values generated might be very close to our π, but be different in say, the hundredth or thousandth decimal digit (a 7 instead of a 6). This would have no effect on the observable universe, as most sources say that only the first 40 or so decimal digits are critical in defining the universe. This would allow for variations between alternate universes while keeping all other factors the same.

Not the answer you're looking for? Browse other questions tagged pi or ask your own question.

29
What Gauss *could* have meant?
1
Different ways of approximating $\pi$
2
Could we calculate pi using an iterative series
4
Is there a difference between the calculated value of Pi and the measured value?
2
How can pi have infinite number of digits and never repeat them?