I am studying differential geometry but am having a hard time picturing curvature. Can anyone explain it to me in simple terms, perhaps with any diagrams. As simple as possible! 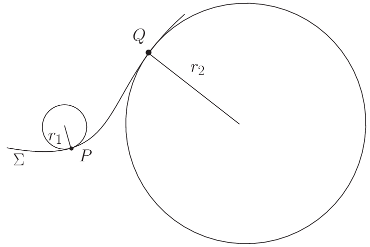 I won't attempt further diagrams, but now think in 2-dimensions - you will need two different sized circles at every point in order to describe the curvature of the surface at that point. So you will have two curvatures (the principal curvatures), $\kappa_1$ and $\kappa_2$ which encode the same information as the sizes of the circles (if memory severs, $\kappa=1/r$ and $\kappa_1$ is the largest possible curvature and $\kappa_2$ is the smallest). Then the Gaussian curvature is the product of these, $$K=\kappa_1\kappa_2$$

In higher dimensions such simple descriptions don't work as well, and it's better to think about measuring curvature as what happens when you move around vectors. However, that concept follows from appropriate generalizations of the above concept.

Curvature is how fast the direction is changing as a point moves along a curve.

In pure mathematics, one often regards distances as mere numbers instead of multiplying a number by a unit of measurement. Then the curvature becomes a dimensionless number.

Not the answer you're looking for? Browse other questions tagged differential-geometry curvature or ask your own question.

2
Curvature of a space curve: how do we get from the conceptual definition to K = |dT/ds|?