Examples of topologies in which all open sets are regular?

An open subset U of a space X is regular if it equals the interior of its closure, as we learn from the Wikipedia glossary of topology. Furthermore, the regular open subsets of a space (any space) form a complete Boolean algebra.

I believe what I'm looking for is topologies in which every open set is regular, other than the ones I've just described. Thanks for any help.

Well, for starters, if your space is $T_1$ (so that one-point sets are closed), then it must be discrete.

This suggests to me that there are not going to be very many interesting topologies with this property.

Addendum: Another possibility would be to consider spaces for which the regular open sets form a basis for the topology. In some sense, this ensures that there are "enough" regular open sets. Such spaces include $\mathbb{R}^n$, all topological manifolds, and all Banach spaces. I can't offhand think of an example of a space without this property; can anyone? If there are interesting necessary and/or sufficient conditions for this property, better still.

($\Leftarrow$) The proof in this direction is obvious.

($\Rightarrow$) Suppose $X$ is a topological space such that every open set is regular open. Let $A\subset X$. By hypothesis, $iA=ibiA$ where $i$ is the interior operator and $b$ is the closure operator. Since $A$ is arbitrary, this implies that $i=ibi$ on all of $2^X$.

The result now follows from Theorem 2.1 in Gardner and Jackson's 2008 paper, The Kuratowski Closure-Complement Theorem (hereafter referred to as GJ). The authors show that any topological space satisfying the relation $ibi=i$ must be a partition space (the standard definition of which says that an equivalence relation exists such that the equivalence classes form a basis for the topology, but this is equivalent to saying that all open sets are clopen). $\,\square$

Note. Theorem 2.1 classifies all topological spaces according to their Kuratowski monoid, namely the monoid of operators generated by the complement and closure operators. Page 15 of GJ presents the following Hasse diagram for the six different Kuratowski monoids that are possible: 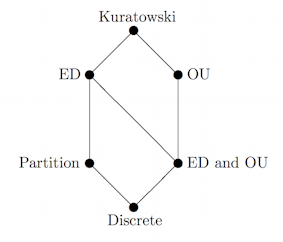 ED stands for extremally disconnected and OU stands for open unresolvable. Interestingly enough, the authors claim that a point-set argument using the additive property $b(A\cup B)=bA\cup bB$ of topological closure is required to prove that there are no topological spaces with Kuratowski monoids strictly between ED and Partition. The proofs of the other six edges are each based on the poset structure of the 14-element monoid labeled Kuratowski.

Not the answer you're looking for? Browse other questions tagged general-topology boolean-algebra or ask your own question.