Counts of certain types of faces of the $CQHRL_d$ polytope family

This is essentially a counting question, with motivation being supplied by a particular polytope family called crenellated quad hyper-rope loops of dimension $d$ ($CQHRL_d$) ($d$ $\ge$ $5$) and certain faces of them. In particular, the question can be answered just by reference to the progression of diagrams (the first few shown below) which suffice to provide a framework for the face lattices of this polytope family. 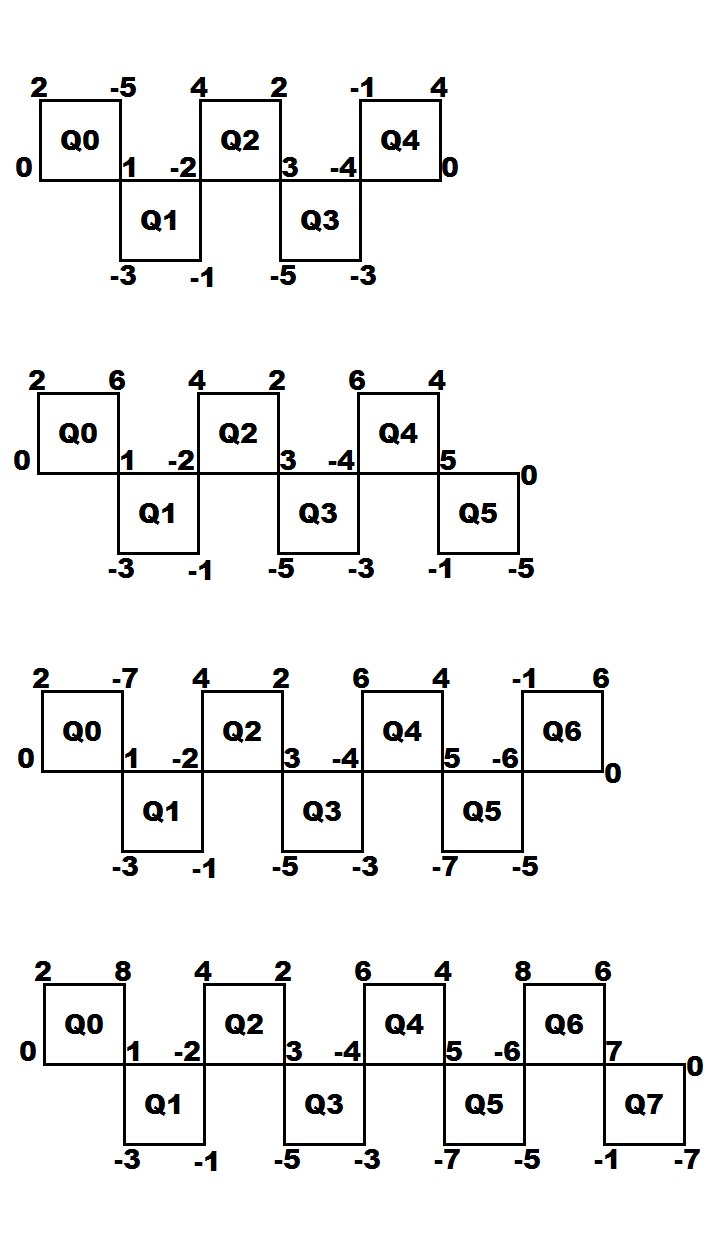 $\bullet$ All pairs of vertices not on the same quadrilateral subtend an edge.

$\bullet$ Vertices shown as distinct but having the same number label are the same vertex (i.e., along the upper and lower and lower edges of the diagram, and also vertex $0$).

$\bullet$ Any pair of quadrilaterals that are two apart (mod $d$) have a vertex of intersection, and form a 4-dimensional face.

$\bullet$ Any pair of quadrilaterals that are at least three apart (mod $d$) are disjoint, and form a 5-dimensional face which is the free join of two quadrilaterals.

$\bullet$ If $d$ > $3q$, it is possible to take a pyramid over such a face (forming another face) by adding a vertex which is not diagonally across a quadrilateral from one of the vertices of the $q$ quadrilaterals.

Finally, the question follows. (Thank you for your patience.)

Given dimension $d$, number of disjoint quads $q$, and number of pyramid apices $v$, how many faces of $CQHRL_d$ which are v-fold pyramids over a free join of $q$ quadrilaterals are there, where one of the quadrilaterals is $Q0$?

This combinatorial function is a useful building block in counting certain types of faces of $CQHRL_d$. 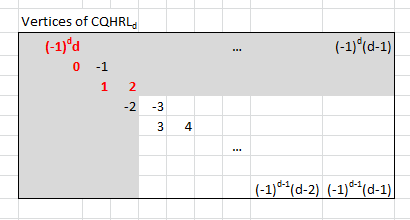 We observe that there are $q$ gaps (between each quad) whose length we represent by the number of row/columns taken up by the gap - including the case of a zero-length gap. We will number the gaps from $0$ to $q - 1$. We'll plan to sum the contributions of each combination of:

We denote the gap lengths $g_i$, and the number of vertices in each gap $v_i$. We have:

Not the answer you're looking for? Browse other questions tagged combinatorics polytopes or ask your own question.

2
How many combinatorial types of pure quadtopes of dimension 5 are there?
2
is this sufficient to define a simplex?
0
How do I prove this simple result for the face structure of convex sets?
0
How to find the number of faces of a rhombicosadodecahedron?
2
Proving the number of k-dimensional components for the cross polytope
1
Number of faces in a simplex
0
Show that each edge of the cyclic polytope $C_4(6)$ is contained in either three or four facets, and either three or four 2-faces.
1
Justify the term "face lattice": When is an abstract polytope an order-theoretic lattice?
6
Lower a polytope into the water $-$ are vertices at the water level connected to those at the bottom?