I read this Google Interview Question.

Which algorithm used in this question?

The unstated (or, rather, very vaguely stated) assumption in the problem is that the probabilities of observing a car during any given non-overlapping time intervals of equal length are equal and independent.

(Of course, this assumption can't really be true in practice, even if "observing a car" is taken to be a point event — for example, if the road has $n$ lanes and you observe a different car within each of $n$ consecutive 1 millisecond intervals, you're not going to observe another one within the next millisecond — but it can be a fairly good approximation if the intervals are of moderate length and the road not very busy.)

To be specific, let $A$, $B$ and $C$ denote the events "no cars are observed within the first / second / third 10 minutes" respectively. Then we have

Since the events $A$, $B$ and $C$ are independent by assumption, we get

The question seems rather ambiguous, but let's assume cars arrive as a Poisson process rate $\lambda$. If this is the case, the distribution of the time (from now) to the first arrival of the car is exponential with parameter $\lambda$. Therefore probability of no cars arriving is $P(T>t) = exp(-\lambda t)$. Thus

Alternatively you could approximate by a binomial model. Suppose in 10 minutes the chance of no car arriving is $p$. Then in thirty minutes (assuming each period is independent) the probability of no cars passing is $p^3$. Whence, $p=\sqrt[3]{0.05}$.

For curiosity, I saw other solutions and found that everyone is solving via probability of not observing a car in 10 minutes.

Let's answer it in a straight way.

Let 'p' be the probability of observing a car in any 10 minutes interval.

Now let's generate the probability of observing a car in 30 minutes, let it be P(30).

Let's divide 30 minutes time interval into three 10 minutes intervals as A, B and C.

As all are independent events so,

As all are independent events so,

It can be seen in this way:

Consider an event, We are tossing a coin 3 times a row and we want to find what is the Probability of getting at least 1 head.

Assuming a Poisson Distribution, we know that the probability mass function is:

(To answer the OP's question, this is where the cube root comes from, because the $ln$ is the inverse of $e$ and gives us the exponential value.)

There are three cars every thirty minutes, which is $0.1$ every minute. So, we multiply that by 10 minutes and get $\lambda=1$ for units of 10 minutes.

Then, to find the probability of at least one car, we just subtract that from one:

The probabilities (p) for the given number of cars (k) in the 10 minute interval looks like this: 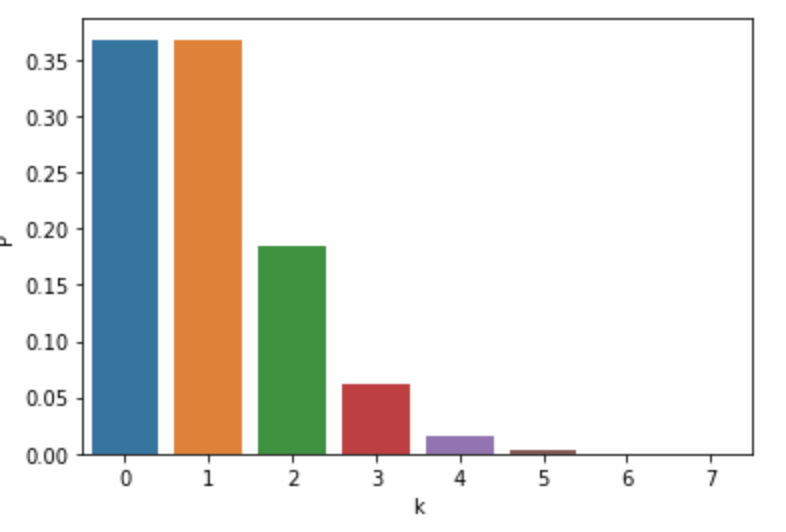 Not the answer you're looking for? Browse other questions tagged linear-algebra probability algorithms or ask your own question.

4
How can I get better at this certain kind of probability problem?
2
Combinatorics question getting a probability
1
Exponential distribution, am I doing this correctly?
0
Poisson process basic problem
1
Probability of seeing a headlight getting switched on
1
Constant default probability problem
0
Probability Calculations on Highway (part 2)
1
Probability that at least one other vehicle arrives between third and fourth var arrival.