How many ways to arrange Lego bricks on a Lego board?

Let's say I have a board like this one (though significantly smaller, it's 4x7) 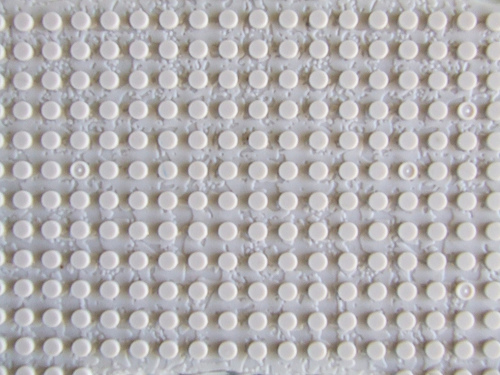 I'd like to know how many ways to arrange the bricks on the board. The bricks should stay inside the board and they should not overlay.

Doing some calculations/estimations, I came up with ~285 arrangements, but I couldn't figure out a more "scientific" method. I'd also like to "create" a formula taking into account variables like the board size, the number of bricks and their size. Thanks in advance.

The following 316 arrangements are possible: (some are symmetric; enumerated with a C# program)

This can be verified using a Python script gleaned from here:

I have to confess that my C# code to produce the list of arangements is much longer.

Next, you can investigate the cases where the first brick is close to a border (there are 4 situations to consider) or a corner (there are 4 cases too), in which case this removes slightly less positions for the second brick.

If you don't feel like doing the case analysis, you may compute $6$ values of $P(n,m)$ and use them to recover the values of the coefficients $a,b,c,d,e,f$.

If you have a fixed finite set of bricks, there still exists some polynomial giving the correct answer for large enough values of $n,m$, though it quickly gets difficult to compute.

But I don't think there is a formula that allows you to change the set of bricks.

A 2nd attempt to enumerate the arrangements, this time in a recursive fashion using C#: (also arrives at 316 arrangements)

My code scans the board to find all positions where brick 1 can be placed. This is done in an outer loop to consider rotated as well as non-rotated placements.

Once a position for brick 1 is selected, a nested inner loop (or recursive call) is started to again scan all positions for brick 2.

The board is modelled as 2D array. A brick is "placed" by putting its number (1 or 2) in all covered board positions. A brick can only be placed, if all 2x3 positions are unoccupied (=0).

After every placement, the placement is undone (cleared) before trying the next alternative. Recursion has the advantage, that you can enumerate placements for n bricks quite easily.

Not the answer you're looking for? Browse other questions tagged combinatorics permutations tessellations or ask your own question.

7
How many ways can we place these ships on this board?