I'm taking a Linear Algebra course, and we just started talking about matrices. So we were introduced to the elementary row operations for matrices which say that we can do the following:

Now I understood from the lecture in class how to use these and all, but I want to understand the logic behind number 3. Is there a mathematical proof that shows that by adding row $R_1$ to row $R_2$ we are not changing the system of equations?

We can see that the system of equations has indeed changed, but the set of solutions (in this case $\{(2,2)\}$) is preserved.

Thus the set of solutions is preserved.

When you have a system of equations, let's say, lines. If you graph them, you'll see that the lines intercept at a common point. This point is the solution of the system. So, when you create another equation based on the equations of your original system, like, adding one to another, you're creating a totally new line, but the solution will be the same.

Think about this system:

(The system can be viewed as something like this 'matrix')

Now by adding the equal therms we have a third equation to our system:

You see? You added one equation to another! :)

That also share the solution $S\{x=3, y=2\}$. Of course, this will be a new line, but in the system of equations you only care about the solutions to the system. It doesn't matters if it will be a different line. You've just found another line that intercepts your system at the solution.

If you multiply the two sides of a row, it will still work, because you're getting another equation that also shares the same solution, as I shown here.

When you work in Linear Algebra, you don't solve directly on systems, but I think you're seeing it as something like a matrix. This is just a way to work with systems without having to write the $x, y, ...$ coefficients all the time.

So you had this system of lines: 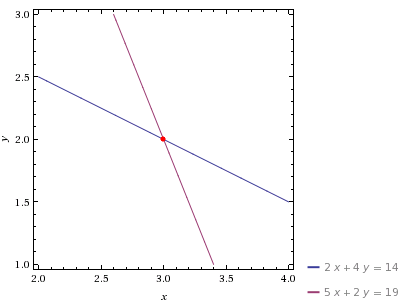 Then you created a new system with the third equation: 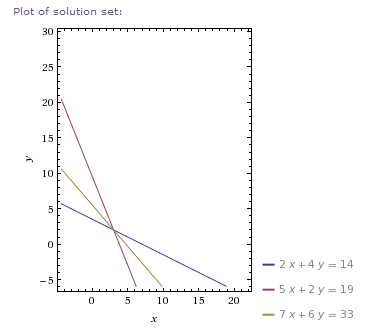 But all them has the same solution

Examples with only $2\times 2$ linear systems may be misleading, albeit illuminating.

But what's the resulting matrix? It's precisely $A$.

Thus the two systems have the same solution set.

The same reasoning applies when you do this in general, with the limitation of using two distinct rows. Otherwise you could end up with summing to a row its opposite, which is the same as multiplying the row by $0$, which is not a legal row operation.

For the same reasons, also the other two types of row operations don't change the solution set: they are reversible.

This has the consequence that a matrix $A$ can be represented written as product of “simpler” matrices: some people write this as $$ A=P^TLU $$ where $P$ is a “permutation matrix” (corresponding to the swap row operations needed to bring $A$ in row echelon form), $L$ is lower triangular and $U$ is the row echelon form. Both $P$ and $L$ are invertible and it's really easy to write down their inverses. Such a decomposition has many applications because $P$, $L$ and $U$ carry information about $A$ in a easily usable format.

3
How to calculate per unit cost?
1
Find all values at which the vector is linearly expressed through vectors
1
Row rank in invariant under elementary operations
0
Why transformed matrices give the same solutions?