I'm interested in finding visual and/or physical approaches to understanding finite fields. I know of a few: V. I. Arnold has a few pictures of 'finite circles' and 'finite tori' in his book Dynamics, Statistics and Projective Geometry of Galois Fields. Also, N. Carter displays what you might call 'double Cayley diagrams' of the fields of order $4=2^2$ and $8=2^3$ in his book Visual Group Theory, which I reproduce here: 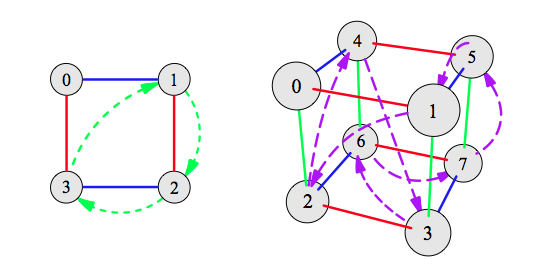 Are there any other interesting visual/physical ways of understanding finite fields?

Here's an interesting take on the problem of visualizing finite fields: Thomas Alden Gassert, a graduate student, studies finite fields generated by the solutions of iterated polynomials, yielding a visualization of finite fields via cycles. See the pictures on his website and especially in his papers: https://www.math.umass.edu/~gassert/

While not giving visualizations of finite fields you might find the book: A Geometrical Picture Book by Burkard Polster, Springer, NY, 1998 of interest. It has ways of visualizing various combinatorial objects such as finite affine planes and finite projective planes (some of which can be co-ordinatized using finite fields), as well as means for drawing other finite combinatorial objects (Steiner triple systems, generalize quadrangles, etc.).

John Conway has constructed the finite field $\mathbf F_{2^n}$ using the game of Nim. It is quite a surprising construction, without a known counterpart for odd primes (as far as I know). You can see the Wikipedia entry and the references at the bottom. 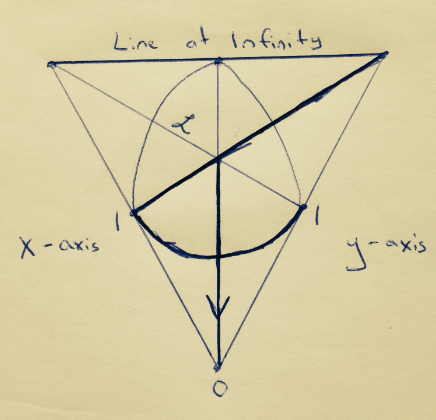 The line at infinity is arbitrarily chosen, $\mathscr{L}$ is a line 'parallel' to the $x$-axis (i.e. meeting it at the line at infinity), and the construction lines are drawn thicker with the final line pointing at the result (0).

Not the answer you're looking for? Browse other questions tagged abstract-algebra intuition finite-fields visualization or ask your own question.

6
Can one construct a “Cayley diagram” that lacks only an inverse?
1
Generators of fields, extending groups to fields, finite abelian groups
4
Degrees of faithful irreducible representations of $\mathbb{Z}_n$ over finite fields
2
Connections and Differences between these Cayley Diagrams for $A_4$ and $S_4$ - Carter pp. 80, 82
1
Visualize $A_4$ and $\langle x, z\rangle$ isomorphic to the Klein 4 group
2
About Cayley graphs on finite fields.
2
Necessary and sufficient condition for a map between a finite field being invertible
1
Finding a generator for the external direct product of two finite cyclic groups