I am following Stein and Shakarchi's book on analysis (Real Analysis: Measure Theory, Integration, and Hilbert Spaces) and in Proposition 3.9 on p.86 they present a proof that if $f$ is a measurable function on $\mathbb{R}^d$ then $\hat{f}(x,y)=f(x-y)$ is measurable on $\mathbb{R}^d \times \mathbb{R}^d$.

The strange thing is, I can follow all the arguments in the proof but I cannot make sense of all of it, I can't string the facts together.

A snipped of the proof is as follows: (from Google books) 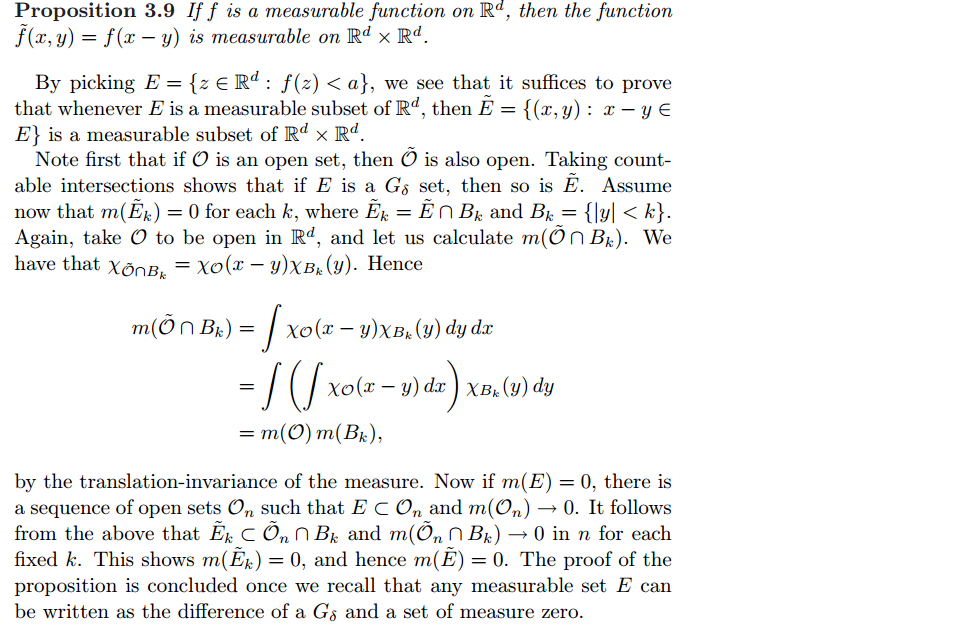 The book concludes the proof by saying that any measurable set $E$ can be written as a difference of a $G_\delta$ and a set of measure 0.

Let's introduce a bit of further notation, and define

The remainder of the proof treats the nontrivial case, that the preimage of a null set is also measurable. That finishes the proof because any measurable set is the difference of a $G_\delta$ set and a null set, so its preimage

is the difference of a $G_\delta$ set and a measurable set, hence measurable.

To show that the preimage of a null set $E\subset\mathbb{R}^d$ is measurable, the preimage is approximated by constraining the $y$ component,

Not the answer you're looking for? Browse other questions tagged real-analysis integration or ask your own question.