I ran across this comic, and it's gold. It is orginially published here

If I am correct, the first panel alone defines a self-referential loop if not a differential Equation:

See, when you are shading the amount of black ink in the graph in the first panel: you can add as much as you want, but it must be related to how much is in the comic alltogether!

The only way to resolve this is to explain how Z varies with itself!


Also, if $X$,$Y$,and $C$ are allowed to vary does this not engender a 4-dimensional graph?

(I told you this comic is gold.)


That is just the first panel taken alone! Now Let's take the THIRD panel into consideration!

This panel looks a like Xeno's paradox in 2d, or a similar pattern to the horn of Gabriel!

As a Tangent, let us describe Xeno's paradox as such (in one dimension): an arrow is fired, once it reaches the halfway point has halfway to go. Once it reaches halfway of that halfway is has halfway to go again. Thus, there are an infinite number of half-ways! Just to be concise, let me express my opinion of something that at least kinda sorta reaches for its resolution: $$\int_1^\infty \frac{1}{x^2}\,dx = 1. $$ (Note this could also be discussed in terms of a similar series solution, such as $\sum_{i=1}^{n} \frac{1}{2^n} = \frac{\pi^2}{6}$, but actually trying to and resolving xeno's paradox is going way beyond the scope of this question.)

But, the point of this is that an infinite pattern can lead to a finite result (such as the area under curve $1\over{X^2}$). Now, look at the leftmost panel closely: 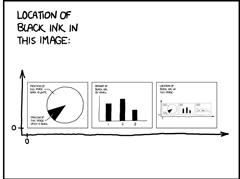 In other words, the third panel must plot itself and infinite number of times.

Can it be shown that like the the amount of ink needed for these plots will so fast that a thus that a finite amount of ink is needed to draw an infinite number of these "reflected" third panels?

Let us try to compute the amount of ink recquired to draw this infinite number of self-mirrors.

We can assume this because the area covered by ink will be a fixed proportion of the squares area if the thickness of the the ink varies with the size of the square, which it obviously must or the image cannot be drawn!

Does this first differential equation still apply? How would we unite these equations !?

I will not comment on the second panel, but I think it may be similar to the first.....

Thank you for reading all this!

First off, when modeling a problem, it's wise to start from identifying your unknowns (step #0), rather than drawing parallels to other problems (that's maybe step #1, & it's contingent on step #0). In this case, the problem's self-referential aspect says 'implicit equation' & not 'differential equation' (which is a special class of implicit equations). Algebraic equations can also very well be implicit.

Third, the amount of ink in the third panel is $p_3+\varepsilon_3 x$, where $\varepsilon_3$ is the scaling factor corresponding to the the embedded comic (here also, $\varepsilon_3<1/3$).

One can play games with $p$ to arrive at that a solution cannot exist, but I'll stop here & remark, instead, that the linearity of the equation is inevitable on account of the comic being scale-invariant (scaling a valid/invalid comic up or down will yield a valid/invalid comic). Also, this offers a way of drawing the comic: determine $x$ and then $x_1,x_2,x_3$ by the corresponding equations; draw first panel using $x_1$; draw second panel using $x_1,x_2,x_3$; draw third panel without the embedded comic; scale down comic; embed in third panel; repeat ad infinitum.

Not the answer you're looking for? Browse other questions tagged calculus sequences-and-series recreational-mathematics infinity or ask your own question.

2
Infinity xkcd style: can a turing machine exist?
9
Interesting shapes using probability and discrete view of a problem
1
How to determine the upper and lower bounds for the function $\frac{1}{1+e^x}$?
0
How does one understand and resolve Zeno's paradox?
2
Problems with Cantor's diagonal argument and uncountable infinity
4
Hitori and graph connectivity
0
How to tell when two advertising panels showing an ad will synchronize?
7
A Difficult Area Problem involving a Circle and a Square