How can you prove that the square root of two is irrational?

I have read a few proofs that $\sqrt{2}$ is irrational.

I have never, however, been able to really grasp what they were talking about.

Is there a simplified proof that $\sqrt{2}$ is irrational?

Another method is to use continued fractions (which was used in one of the first proofs irrationality of $\displaystyle \pi$).

This leads us to the following continued fraction representation

Exercise: Show that the Golden Ratio is irrational.

Consider this proof by contradiction:

Assume that $\sqrt{2}$ is rational. Then there exists some rational $R=\sqrt{2}=\frac{Q}{D}$, where $Q$ and $D$ are positive integers and relatively prime (since $R$ can be expressed in simplified form).

The continued fraction proof in Aryabhata's answer can be recast into an elementary form that requires no knowledge of continued fractions. Below is a variant of such that John Conway (JHC) often mentions, followed by my (WGD) reformulation that highlights the key role played by the principality of (denominator) ideals in $\:\mathbb Z\:$ (which I call unique fractionization) in order to emhpasize its very close relationship unique factorization).

Unique Fractionization $\ $ The least denominator $\rm\:B\:$ of a fraction divides every denominator.

Thus JHC's proof essentially "inlines" the above proof - which can be more conceptually viewed as the principality of (denominator) ideals in $\mathbb Z,\,$ cf. my post here. See also this sci.math discussion between John Conway and me (click "plain text" to get correct format).

Let us assume $\sqrt{2}$ is rational, hence it can be written down in the form $\sqrt{2}=a/b$ assuming that both $a$ and $b$ are positive integers in that case if we look at the set $S = \{k\sqrt{2} \mid k, k\sqrt{2}\text{ are integers}\}$ we find that it's a non empty set of positive integers, it's non empty because $a = b\sqrt{2}$ is in the above set. Now using the Well ordering principle we know that every set of positive integers which is non-empty has a minimum element, we assume that smallest element to be $s$ and let it equal to $s =t\sqrt{2}$. Now an interesting thing happens if we take the difference between the following quantities $s\sqrt{2} - s = (s-t)\sqrt{2} = s(\sqrt{2} - 1)$ which is a smaller element than $s$ itself, hence contradicting the very existence of $s$ being the smallest element. Hence we find that $\sqrt{2}$ is irrational.

I know the proof but I am still amazed at how the author came up with the set assumption. Sometimes such assumptions make you feel kinda dumb :). If anyone has some insight regarding how to come up with such assumptions kindly post your answer in the comment, otherwise I would just assume that it was a workaround.

Another one that is understandable by high schoolers and below.

We will use the following lemma:

(Here of course we use the well-ordering principle which most high schoolders would not know about, but the intuition that the sequence would hit $0$ after at most $a_0=a$ steps is easy to get).

Here's a short algebraic proof. It nowhere uses rules about primes or even numbers.

contradicting the fact that $q$ was the smallest positive denominator for $\sqrt{D}$.

The expression is arrived by computing (using that $p=q\sqrt{D}):$

Here are some of my favorite (sketches) of proofs for the irrationality of $\sqrt{2}$.

[Reposted from closed topicProve the square root of 2 is irrational

Let $x^2-2=0$ be the polynomial equations this have a possibles rational solutions $\pm1,\pm2$ and no one of this is a solution then the solution is irrational and we now that this are $\pm \sqrt2$

Proposition: In base $2$ any square must end in an even number of trailing zeros.

The proposition comes directly from, for example, multiplying a binary number with itself using the standard algorithm or simply by squaring

Multiplying by $2$ is shifting all bits of a binary number to the left, so if the number was ending in $m$ trailing zeros after multiplication by $2$ it will end in $m+1$ zeros.

*Notice that this proof does not care about the relative primality of $p$ and $q$.

Let me give a proof based on (partly) Newton's method and (mainly) Pell's equation. The proof technique is also similar to that of continued fractions.

If you know more about Pell's equation ($x^2-ny^2 = 1$ has solution for all positive nonsquare integer $n$), you can prove that $\sqrt{n}$ is irrational.

To establish the claim that the brown triangular path is hypotenuse-length, note that if three congruent isosceles right triangles are arranged like the gray triangles in the middle figure, and the rectangular gap in the middle filled in, the result is an isosceles right triangle. Then the black, green, and brown paths all have length $2s+d$, using the notation of the figure on the right. 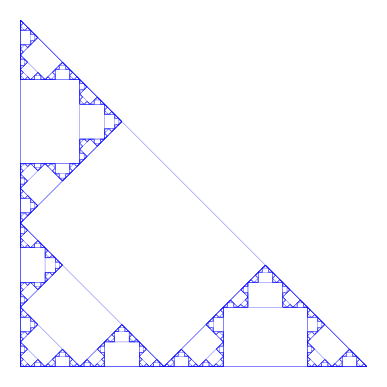 Remarks: This proof is essentially the same as the continued fraction proof of Aryabhata and the algebraic proof of Thomas Andrews. The only added feature is the geometric interpretation and the pictures.

To relate it to the algebraic proof of Thomas Andrews, refer to the rightmost diagram and let $$ \sqrt{2}=\frac{p}{q}=\frac{2s+d}{s+d}, $$ where $p$ has been interpreted as the length of the hypotenuse and $q$ as the length of a leg. But the small right triangles in the diagram make it clear that also $$ \sqrt{2}=\frac{d}{s}=\frac{2q-p}{p-q}. $$ If $\frac{p}{q}$ was in lowest terms, this is a contradiction, which is another way of expressing the infinite descent idea of the geometric proof. 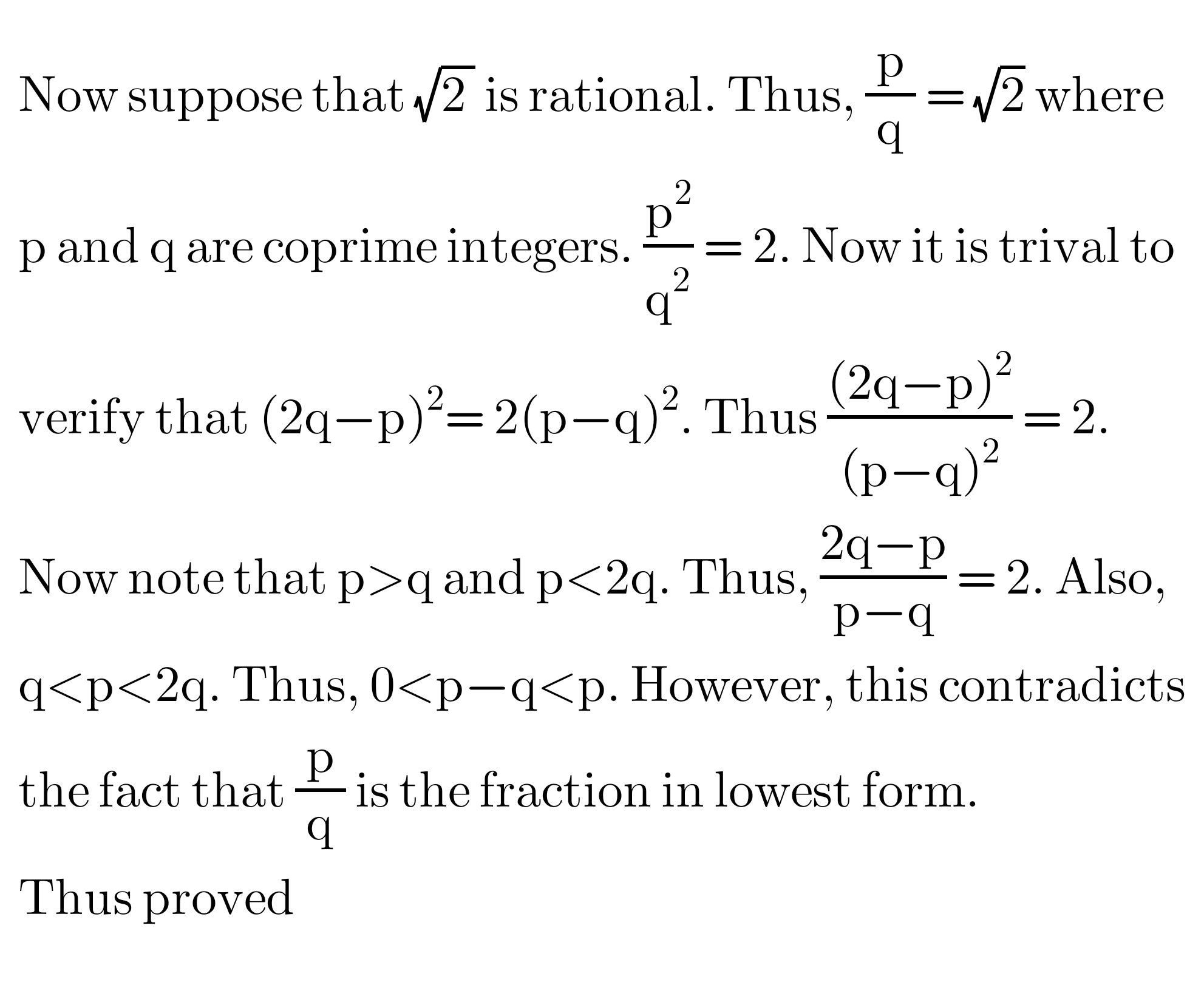 (Since p and q are coprime integers it is supposed to be in lowest form. But we demonstrated the existence of a fraction having lower positive integral denominator.) It is proof by Contradiction

Not the answer you're looking for? Browse other questions tagged elementary-number-theory radicals rationality-testing or ask your own question.

1
Positive rationals satisfying: $a^2+a^2=c^2$?
-1
Direct Irrationality Proof for $\sqrt{3}$ and $\sqrt{6}$
0
Can a^2 = 2b^2 have a solution where a, b are in Z but not zero?
0
How to prove $\sqrt3$ is irrational?
0
Prove that there do not exist nonzero integers $a$ and $b$ such that $a^2=3b^2$.
1
Is there a general template for Proving the Irrationality of some Radical by Contradiction
-1
Proof of why $\sqrt{2}$ is an irrational number
0
How to show that $(a/b)^2$ in this situation cannot be an integer
-4
Show that there is no rational number whose square is $2$ or $8$
0
Proof using method of contradiction. Use the method of contradiction to prove that √2 is irrational.
See more linked questions