I don't think this is possible. Let $P$ and $Q$ be the given two points. Take an ellipse with given semi-axes $a$ and $b$ that passes through $P$ and $Q$. Imagine $P$ and $Q$ as pins sticking in the floor, and the ellipse is a piece of cardboard that's touching both of them. Clearly you can "slide" the ellipse around, keeping it in contact with the two pins. The sliding motion will change the center.

I'm sure that an argument could be constructed that is more mathematically rigorous. But the physical argument works OK for me.

Here's a picture of two ellipses, both with semi-axes (200,50) that both pass through your two given points. Obviously they have different centers. 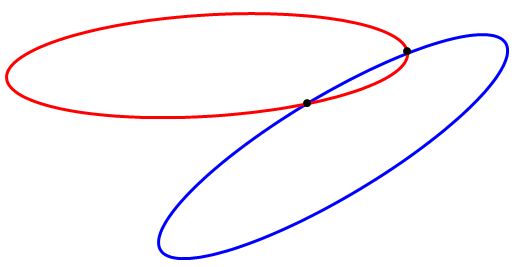 Using the "sliding" process I described, you can produce an infinite number of ellipses with this same size through these same two points. So, your problem is unsolvable.

8
How to find the center of an ellipse?

12
How to find center of an arc given start point, end point, radius, and arc direction?
2
From the given arc is known the start point the end point and a random point on the arc how we can find the center point coordinates?
0
How do I find the start and end point of an Arc? Using center xy, radius and start/end angle values.
3
how to find arc center when given two points and a radius
6
Given a chord, how do I find the ellipse?
0
How to find correct end point of an arc from given start point, center point, start angle and radius?
0
Find arc midpoint in 3D given start, end, center, normal and rotation direction