Gradient nonzero extensions of a vector field on the circle

Let me make some remarks.

No, not every vector field of this form can be extended in the way you desire. In particular, it's sometimes possible to see from the vector field that there must be an interior critical point. 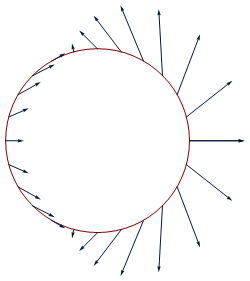 It is easy to check that the degree of this vector field is zero, and it is clear from the vertical symmetry that $\displaystyle\oint_{\mathbb{S}^1} \!a\,dx+b\, dy = 0$. 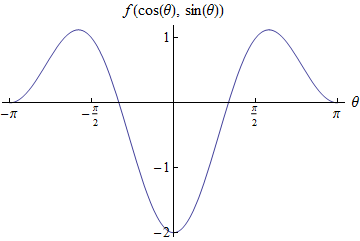 EDIT: My original answer is wrong -- I addressed a slightly different question.

I originally wrote, "If you are still interested in the question, I would suggest reformulating it slightly as two different questions." That's not actually correct. Here are the two questions I originally suggested:

(1) Suppose you have a gradient vector field of a function $f$ on the disk, $\nabla f$ non-vanishing on the boundary and of degree $0$. Then, you can deform the function $f$, keeping it constant near the boundary of the disk, so that it has no critical points.

The problem is that point (1) does not actually address the question of keeping the gradient of $f$ fixed on the boundary. That's not actually possible, as Jim Belk's example shows -- his gradient defined along the boundary points inwards at the boundary maximum, showing that there must be an interior max that we cannot deform away.

The argument I sketch below allows us to keep the function values fixed along the boundary, but requires us to let the gradient change.

With these caveats now, the rest of what I wrote before is correct, so I will leave it at least until I have time to illustrate the difference between the two problems.

I would prove (1) by using a Morse critical point cancellation. First, perturb $f$ so that it has non-degenerate critical points.
Then, because the degree of $\nabla f$ is zero, the sum of the degrees calculated on a small circle around each zero of $\nabla f$ in $D$ is also zero. Now note that at a local minimum or a local maximum, the corresponding degree is $+1$ and at a saddle, the degree is $-1$. This means we can pair each of {min or max} with a saddle and then cancel them pairwise.
There may be an easier proof, but I can't think of one right now.

I would prove (2) by first extending $\alpha$ to any 1-form on the disk. To make our life easier later, extend $\alpha$ to a closed $1$-form in a neighbourhood of the circle. This can be done easily in polar coordinates near the circle. Now extend to the disk by an arbitrary 1-form. Call this extension $\beta$. (Note that we can do this without any condition on $\alpha$.)

(One is by showing the pairing between de Rham cohomology with compact support on the disk and homology of $D^2$ rel its boundary is non-degenerate... thus $d\beta$ represents the $0$ class in compactly supported de Rham cohomology, and thus is exact. Another is by solving $\Delta u = g$ in the disk with the boundary condition $u=0$. Then (modulo a sign question) take $\nu = du \circ i$, where $i$ is the standard complex structure on the disk. I'm sure there's a simpler way, by hand. I unfortunately don't have time to think about finding it now.)

Not the answer you're looking for? Browse other questions tagged real-analysis differential-topology or ask your own question.

0
Why the degree of $p/|p|$ is zero on $\partial W^\prime?$
2
$G$ must hit the origin. - Is this proof legit?
3
Finding zeros of maps between manifolds with different dimensions
1
Degree of a vector field on the boundary of a punctured ball?
0
Prove that the index of a vector field is well-defined.
1
Finding the Gradient of a Vector Function by its Components
7
The identity theorem at the boundary (complex analysis)
7
Can we approximate harmonic functions with harmonic functions with non-vanishing differential?
0
Is a bijective smooth map of the closed disk with invertible differential a diffeomorphism?