I was just looking at a calculus textbook preparing my class for next week on complex numbers. I found it interesting to see as an exercise a way to calculate the usual freshman calculus integrals $\int e^{ax}\cos{bx}\ dx$ and $\int e^{ax}\sin{bx}\ dx$ by taking the real and imaginary parts of the "complex" integral $\int e^{(a + bi)x} \ dx$.

So my question is if you know of other "relatively interesting" results that can be obtained easily by using complex numbers.

It may be something that one can present to engineering students taking the usual calculus sequence, but I'm also interested in somewhat more advanced examples (if they're available under the condition that the process to get them is somewhat easy, or not too long). Thank you all.

There are too many examples to count. Let me just mention one that is particularly concrete: how many subsets of an $n$-element set have a cardinality divisible by $3$ (or any positive integer $k$)? In other words, how do we evaluate

in closed form? Although the statement of this problem does not involve complex numbers, the answer does: the key is what is known in high school competition circles as the roots of unity filter and what is known among real mathematicians as the discrete Fourier transform. Starting with the generating function

we observe that the identity

This formula can be stated without complex numbers (either by using cosines or listing out cases) but both the statement and the proof are much cleaner with it. More generally, complex numbers make their presence known in combinatorics in countless ways; for example, they are pivotal to the theory of asymptotics of combinatorial sequences. See, for example, Flajolet and Sedgewick's Analytic Combinatorics.

Without complex numbers, it's a mystery why the power series for $1/(1+ x^2)$ centered at the origin has radius of convergence 1. The function is infinitely differentiable, no strange behavior at 1 or -1, etc.

But in the complex domain, there are singularities at $\pm i$ which explains why the radius of convergence is 1.

As Dylan Wilson comments in Byron's link, you can derive most of trigonometric identities thanks to Euler's formula:

For instance, I never could learn by heart the formula for the cosine or the sine of the sum of two angles, but on one hand

And on the other hand:

I came across this slick proof of Heron's formula on artofproblemsolving.com the other day. Heron's formula yields the area of a triangle given the lengths of its three sides: $$A = \sqrt{s(s-a)(s-b)(s-c)}$$ where $ s = \frac{1}{2}(a+b+c)$. The entire proof, by high schooler Miles Dillon Edwards, is reproduced here.

I'd like to mention another combinatorial result, this time about asymptotics. Let $a_n$ denote the number of ways that $n$ horses can finish in a race (with ties); in other words, $a_n$ is the number of "lists of (nonempty) sets" with $n$ total members. Generating function methods allow you to deduce that

So far, so real-variable. Where do complex numbers come in? The error in this approximation is controlled by the remaining poles of $A(z)$, all of which are complex. The next two most dominant poles are at $\ln 2 \pm 2 \pi i$ with the same residue, which means that the asymptotic behavior of the error is given by

In other words, the error in the above approximation is quasi-periodic. (Of course there are infinitely many poles, each pair of which also contributes quasi-periodic terms, but as $n$ becomes large these terms become less and less important, most of the time.) This is a phenomenon you can easily see for yourself by actually computing the error for several consecutive values of $n$.

So think about this: even if you correctly guessed the asymptotic behavior of $a_n$ (for instance by making a table of the values $\frac{a_n}{n!}$ (or its inverse, if you are interested in the probability that there are no ties in the race) and noticing that the number of digits grows linearly), and even if you computed experimentally that the error in the approximation is quasi-periodic, how on earth could you possibly have deduced the value of either $r$ or $\theta$ without complex numbers?

which appears in the study of Fourier series is most easily proven by replacing every $\cos(kx)$ on the left-hand side with $$\cos(kx)=\frac{e^{ikx}+e^{-ikx}}{2}$$ and applying the formula for the sum of the geometric series.

A result that might be particularly suitable to students in a calculus sequence is complex partial fraction decomposition. Over the real numbers, you get denominators with both linear and quadratic factors, but over the complex numbers, algebraic closure means you only have to think about linear factors. For example, since

(It turns out that this function is just the arctangent in disguise.) So complex numbers give you a simple algorithm which you can use, in principle, to integrate any rational function. For example, in this recent math.SE thread it is shown that

Not an integral most students would suspect is expressible in closed form! The analogous computation of $\int \frac{1}{1 + x^n} dx$ would even allow you to express the sum $\sum_{k=0}^{\infty} \frac{(-1)^k}{kn+1}$ in closed form (which is just the definite integral from $0$ to $1$). These examples illustrate another application of the discrete Fourier transform, but the method I'm describing here is totally general. 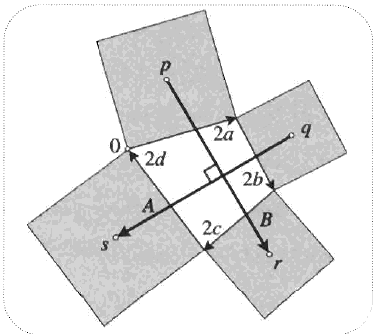 Theorem: The line segments joining the centers of opposite squares are perpendicular and of equal length.

Let $2a,2b,2c,2d$ be complex numbers running along the edges of the quadrilateral.

Condition for quadrilateral to close up is

Let origin be at vertex where $2a$ begins

we want to show that A and B are perpendicular and equal i.e. $B = iA$

This image, theorem, proof and everything is taken from Visual Complex Analysis by Tristan Needham.[One of the Best Books. Highly Recommended.]

I know of several ways to prove the Fundamental Theorem of Algebra using only basic tools from complex analysis. Suppose $P(z)$ is a non-constant polynomial. $|P(z)|$ is large outside of a large disk, and inside that disk since $1/P(z)$ is analytic, $1/|P(z)|$ is bounded by the maximum it has on the boundary. Thus $1/P(z)$ is a bounded analytic function on the whole plane so by Liouville's Theorem it is constant, a contradiction. Thus $P(z)$ has a zero somewhere.

This really only uses the fact that polynomials are analytic, and analytic functions satisfy the maximum principle. Liouville's Theorem takes a little more work, but should be covered in any first complex analysis course.

Yet another example close to my heart: one of the hundred-dollar hundred-digit problems asked for the value of

and by using an appropriate contour, even the humble trapezoidal rule suffices to handle the integral.

We factor the equation as

Then since the right hand side is a square, the two factors on the left must be squares of numbers in $\mathbb{Z}[i]$ so for instance

and squaring this gives

Now equating real and imaginary parts shows that $x = a^2 - b^2$ and $y = 2ab$. From this one easily gets $z = a^2 + b^2$. Of course all of these manipulations need some more details but it would make for a nice example after the formulas have been derived in the usual way (without complex numbers).

You might get some ideas from this MathOverflow thread: https://mathoverflow.net/questions/30156/demystifying-complex-numbers/30185

If you feel like picking up a good book on this topic, "Dr. Euler's Fabulous Formula" by Nahin provides many beautiful applications of complex numbers to other parts of mathematics (he is an electrical engineer).

The prime number theorem can be proved without complex analysis, but the elementary proof is generally considered much more difficult than the standard one (which deduces it from analytic properties of the zeta-function).

I don't know if Dirichlet's theorem on primes in arithmetic progressions can be proved without complex analysis (one special case can using cyclotomic polynomials), but the analytic proof is the only one I've seen. Edit: Adrian below says that you can avoid complex analysis, but it won't look as nice. KCd has given references to specific papers. In either case, note that the analytic proof chronologically preceded the elementary one.

There are tons of applications of complex numbers in places you would not expect. Number theory is one, for example. This example is from The Art and Craft of Problem Solving by Zeitz.

Since one of my interests is the geometry of plane curves, the examples I'll be giving reflect this.

In particular, a lot of manipulative advantages occur when using the Argand form of a plane curve $z=f(t)+ig(t)$ instead of the parametric form $(x\;\;y)=(f(t)\;\;g(t))$: translation is the addition of an appropriate complex quantity, rotation corresponds to a multiplication by a factor $\exp(i\theta)$, and compare the formula for the curvature of a parametric curve (formula 13 here) with the formula for the curvature for a curve in Argand form:

I'll stop here, because at this point I should refer you to Zwikker's "Advanced Plane Geometry", it's an oldie but goodie.

The Cauchy integral formula's are pretty easy to prove from the Cauchy-Riemann equation, especially if your class already knows Green's theorem. I think these are my favorite "easily achieved results"; because these formula's are central to complex analysis, the proof's are rather easy, and the applications are extremely powerful.

If you are discussing complex numbers in a calculus class, it seems natural to discuss applications to integration theory in my opinion.

We may generalize this to

Take the imaginary part and using the Pythagorean trigonometric identity:

The spectral theorem for symmetric matrices. A symmetric matrix $A$ is Hermitian when considered as a complex matrix, so by the spectral theorem for Hermitian matrices it has eigenvectors; alternatively, apply the fundamental theorem of algebra to the characteristic polynomial to show that $A$ has at least one (potentially complex) eigenvector. Either way, $A$ has an eigenvector $v$ with eigenvalue $c$. Rewrite $v$ as $v$ = $x+iy$, where $x$ and $y$ are vectors with real components. Then

Since $c$ is real by Hermitian-ness, this implies $Ax=cx$ and $Ay=cy$. Since $v$ is non-zero, at least one of $x$ and $y$ is non-zero, so we've shown that A, considered as a real matrix, has at least one eigenvector. Symmetric-ness shows that $A$ is invariant on $v^\perp$, so the analysis can be repeated on $v^\perp$, and so on until an orthonormal basis of eigenvectors is obtained.

Not the answer you're looking for? Browse other questions tagged complex-analysis complex-numbers or ask your own question.

83
Easy example why complex numbers are cool
55
Applications of complex numbers to solve non-complex problems
74
“Where” exactly are complex numbers used “in the real world”?
20
An example for a calculation where imaginary numbers are used but don't occur in the question or the solution.
35
Square matrices satisfying certain relations must have dimension divisible by $3$
41
How do I count the subsets of a set whose number of elements is divisible by 3? 4?
17
closed form of $\sum \frac{1}{z^3 - n^3}$
9
Alternative to imaginary numbers?
5
Simple applications of complex numbers
7
The partial fraction expansion of $\frac{1}{x^n - 1}$.
See more linked questions

12
Book recommendations for self-study at the level of 3rd-4th year undergraduate
0
Can I extend these ODE formulas to complex numbers?
3
Square Rooting Back To Real Dimension
0
Computing Complex Line Integrals
0
Re-defining the complex unit for teaching purposes
2
An interesting inequality involving complex numbers
2
Understanding Definition of Complex Number
1
Can we prove the basic properties of circular functions without using power series?
4
Is there a useful notion of complex area?
0
Gamma Function Specifics and properties