There are a lot of variables and constants in a paper that I am writing. Is anything wrong to use Cyrillic letters for constants and Latin and Greek letters for variables? I wonder why the letters are not used in other papers when they need extra symbols. (Image is provided by @Ryan) 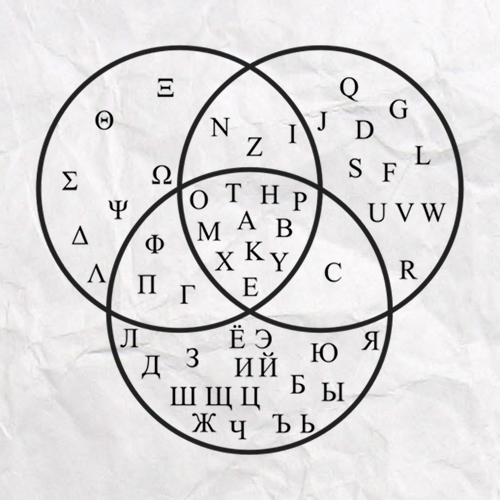 I know some readers may not know the name of these letters, but this is true for some Greek letters too. What is more important: beautiful and easy to understand equations or knowing the name of the letters? Are these letters used in the academic material of the countries that their language are written in Cyrillic?

(Personally, I do not know the name of most Cyrillic letters. But I think using them is interesting and useful.)

I suppose my answer is more cosmopolitan. I would entirely welcome a Cyrillic letter with three caveats:

The complaints against the Cyrillic alphabet because it's non-canonical or difficult-to-pronounce are pretty trivial. I still remember when I learned the Greek alphabet for the first time and wondered why they were necessary and was annoyed and discomforted by having to learn how to transcribe and pronounce new letters. Learning a handful of Cyrillic letters wouldn't have been too much to ask from me in addition to learning the Greek alphabet at the same time. Those who don't recall the Greek alphabet being difficult to learn should have no complaint---they've either forgotten it was difficult and learning a few more letters would be no more difficult, or it was easy for them and learning a few more letters should be just as easy.

I did eventually find out the Greek letters weren't necessary---they were convenient. Marching through subscripts, primes, overlines, uppercase, calligraphy, fraktur, etc. there really shouldn't be any reason why we'd have to dip into another alphabet. But we do, and we can't imagine going back. Probably because we have dipped into the Greek alphabet, these previous tweaks to letters have received their own associated implicit meanings which must be overcome when you wish to use it in a different fashion. The human eye consistently finds lowercase easier to read. Thus we use magascule forms only occasionally. Uppercase letters denote sets. Calligraphy represents sets of sets. Fraktur represents abysmal sets of sets of sets. Subscripts are things that don't move and are somehow related or under collective investigation. Overlines and primes represent quantities which are somehow related to (usually in a determined by fashion) the un-overlined or un-primed quantities. Dipping into the Cyrillic alphabet would probably open up new doors if people were willing to do so.

However, I imagine the reason why we don't dip too frequently into other alphabets is that the Latin and Greek alphabets are accommodating enough to the majority of people. And only a handful wish for more because of necessity. This means that the third point that I listed is probably going to be the hardest to fulfill. If you use a non-orthodox letter for a purpose that could be fulfilled by a Latin or Greek letter equally well, I'd question your compositional skills.

If you find a usage for these letters, please don't type-cast them into a fixed constant. That would murder the potential. And convince a respected mathematician that your usage is good. I want more letters.

For anything you write that you want other people to read, do not use Cyrillic letters if you don't know what you're doing. If there were any trend to use Cyrillic in math then the Russians would use them, and they don't. They write almost everything with Latin and Greek letters like everyone else. And they write "sin" for the sine function, "lim" for limit, "ker" for kernel, and "Gal" for Galois group. You can see this for yourself by looking at Russian wikipedia pages for math concepts with lots of formulas: Latin and Greek letters are everywhere. For instance, find the Wikipedia page on fiber bundle or metric space and then scroll down in the left margin to the Russian link where it says Русский (it's alphabetical by Latin letters, so this is after the more readable link to Romanian). You may not be able to read the words on the Russian pages, but the math will look "normal".

One of the few situations where Russians use Cyrillic in pure math is the abbreviation for gcd and lcm, which is НОД and НОК. Those are the first letters of the Russian terms "greatest common divisor" and "least common multiple". In applied math, Russian abbreviations are used for words (e.g., км/ч for km/h when describing kilometers per hour). That's not like variables you're asking about. The only instance I can think of where Russians commonly use Cyrillic letters as variables in pure math is when talking about a triangulation: instead of $V$, $E$, and $F$ for vertices, edges, and faces, they may use $B$, $P$, and ${\it \Gamma}$, which are the first letters of the Russian words for vertex, edge, and face.

Some comments on the question point out the international use of Ш (esp. in number theory, after the first letter in Russian for Shafarevich). The only other specifically Cyrillic letter I have seen in international use is Л for the Lobachevsky function in hyperbolic geometry, after the first letter in Russian for Lobachevsky, though perhaps due to lack of adequate fonts it is also written as $\Lambda$. I gave a lecture in Russia last year where I was talking about Belyi polynomials (these are polynomials in $\mathbf C[t]$ whose critical values are in $\{0,1\}$) and the notation I made up was Б$(t)$, since Б is the first letter of Belyi's name in Russian. Maybe my idea will take off and in the future Б$(t)$ will be commonly used for Belyi polynomials, but please note that I wasn't just picking some random letter like Ж or Ю for the sake of using "exotic" letters without reason.

I disagree that your example $2$ж + ц$c$ looks better than $2b' + Cc$. It looks bizarre (like $2k + wc$, but worse). Using Cyrillic letters in math in this way reminds me of Feynman's story that when he first learned trigonometry he didn't like the notation sin since it looked like s times i times n. He made up his own private trigonometric notation, and everything was going fine until another student asked him a math question and he started writing out an answer in his own notations without thinking about it. The student asked "What's ${\it that}$?!?". Feynman realized that if he wanted to communicate with other people he needed to use the same notation as everyone else, so he abandoned his notation.

Finally , the Venn diagram in your question is not quite correct. In the common overlap of Latin, Greek, and Cyrillic letters are K and Y. Those are not Cyrillic letters. Take a close look: K vs. К and Y vs. У. The first is Latin/Greek and the second is Cyrillic. If you think that's not an important distinction, consider the following: a Russian math student once asked me how I was typing some math exercises in Russian because the font looked slightly weird to her. It turns out that the Cyrillic font I was using in LaTeX produced K instead of К.

What is more important: beauty and easy to understand equations or knowing the name of the letters?

Neither. What is important is being able to understand what the variables represent.

If $b'$ exists in a paper, there's probably a good chance that $b$ exists, too, and that $b'$ is related to $b$ in some meaningful fashion. Good mathematical writing leverages natural connections between nomenclatures to expose a natural connection between concepts.

One already-used scheme for getting more letters, is to use boldface, script, fraktur, etc. $$ ABC\qquad\mathcal{ABC}\qquad\mathscr{ABC}\qquad\mathbf{ABC}\qquad\mathfrak{ABC} $$ Preferable to using symbols that your readers do not already know.

I ran out of ordinary letters in some of my calculations, and have resorted to using other letters, like 'þ', even down to defininig a constant with this value. The following is an example of the symmetric form of the force on electric charges, and the corresponding form for gravity. $G = c/ 4\pi þ^2$, whence one can derive Planck's mass from $m_P=þ \sqrt{\hbar}$ Note we set $\epsilon=\mu=1/c$.

The main trouble about using letters that you don't know, is that there are plenty of folk out there that do. So it probably is better to actually learn the russian alphabet before you start using these letters.

My other approach is to use multiletter constants, or divide the constants into operators etc. For example, one could use $\lambda, \sigma, \rho, \tau$ for the length, surface, volume operators, and the d/dt operator. One then has $\xi$ for moments (eg moment of charge is $\xi Q$. Stream-constants are written as $v \rho M$ (for mass current), and $J=v \rho Q$ for stream-currents.

Operators are then normally part of the symbol, rather like $\nabla V$.

It's not really about constants as single letters. You could use a case sensitive set as well, using upper-case to set the constant, and lower-case or whatever to qualify it.

Not the answer you're looking for? Browse other questions tagged soft-question notation or ask your own question.

6
Where could (do?) we go after exhausting greek letters?

4
What is the notation for calculating the mode?
3
How do you choose names for functions/operators/sets?
6
Dealing with many entities that need a symbol
4
Which letters to use as index in sequences?
2
Usage of capital and small letters
20
Why do we (mostly) restrict ourselves to Latin and Greek symbols?
2
Implied meaning of lower case latin letters $p$, $q$, $u$ etc. in probability?