Product of slopes is -1 iff perpendicular proof from first principles

Once again I'm working through Stillwell's Four Pillars of Geometry. I'm on Chapter 3 where he first introduces coordinates. The question reads,

I read that as, "Line 1 and Line 2 Perpendicular $\Leftrightarrow$ $t_1t_2=-1$". From what I've tried I can say that using contrapositives isn't very useful since in algebra having something not equal something else doesn't tell you much.

I also tried assuming you could move out from the intersection by 1 on both lines. Then draw two right triangles and go from there. (So, both hypotenuses being 1 and sides $a$ and $b$.) I couldn't finish this idea - there are a couple cases, and it involves "moving" the intersection to the origin which, although allowable, isn't quite allowed yet in Four Pillars

Questions about the question will be promptly answered in the comments!

Suppose the slopes $t_1,t_2$ of the lines $L_1,L_2$, respectively, are both defined (real numbers) and the lines intersect.

I'm not sure what geometric properties you're allowed to use as yet, but here's an attempt at a purely-geometric proof (trig-free).

If the lines are perpendicular, than $\angle ACB$ is a right angle, so $\triangle ABC$ is a right triangle, and $CD$ is the geometric mean of $AD$ and $BD$, so $AD\cdot BD=CD^2$, from which $\frac{DC}{AD}\cdot\frac{DC}{BD}=1$, so the product of the absolute values of the slopes is $1$. Since the slopes clearly have opposite signs, their product is $-1$. 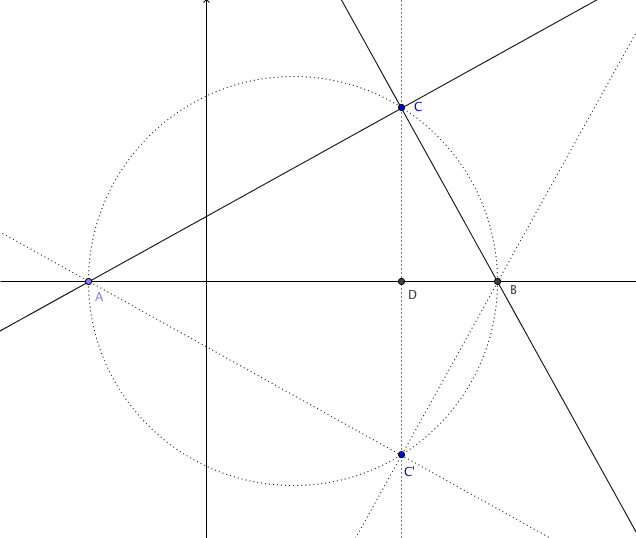 A quick way of seeing this is the following. A group theoretically minded reader will realize that I get a 90 degree rotation as a composition of two reflections, with respect to two lines with a 45 degree angle between them.

Let's assume that one of the lines is `pointing in the direction' $\alpha$ (= the angle between the line and the $x$-axis). If we reflect this line with respect to the line $y=x$, then the new line is pointing in the direction $\beta=\pi/2-\alpha$, because the original line and the new line both form an angle $\pi/4-\alpha$ with the line $y=x$, but they are on the opposite sides. If the slope of the original line was $k$, then the slope of the reflected line is $k_2=1/k$, because this reflection simply swaps the roles of the coordinates $x$ and $y$, and $y=kx+b \Leftrightarrow x=\frac1k (y-b)$.

In the second step we reflect the new line with respect to the $x$-axes. The twice reflected line is pointing in the direction $-\beta=\alpha-\pi/2$, so it is perpendicular to the original line. In this reflection the sign of the slope is toggled, so the slope of this perpendicular line is $k_3=-k_2=-1/k$.

There are some special cases ($\alpha=0, \alpha=\pi/2$) not covered by this argument, but in that case one line is horizontal and the other vertical, and their respective slopes are $0$ and $\infty$, so their product doesn't really make sense.

If one of the slopes is $\infty$, then that line is vertical, and the orthogonal line to it has slope $0$. If the relation would hold always, then we would have $0 \cdot \infty=-1$, which is not true. The relation between the slopes of perpendicular lines in the form $t_1t_2=-1$ is used when no line is vertical or horizontal.

Not the answer you're looking for? Browse other questions tagged geometry euclidean-geometry analytic-geometry or ask your own question.

0
Find the missing rise that makes these lines perpendicular.
0
Perpendicular lines and Gradients

3
Geometry Reflection Notation
0
Find (in terms of n) the shortest distance between lines L and M.
3
contest problem in geometry
0
Problem involving the product of a secant and its exterior section that is created through a perpendicular to an extended diameter.
0
Slopes of lines making an angle to a given line
0
Problem involving perpendicular chords from origin of parabola?
2
Prove $(-a,-\frac{a}{2})$ is orthocenter for triangle formed by given lines
0
Constructing a line perpendicular to one of two given intersecting lines by first drawing a circle
0
Can a line in a projective plane have just two points?