Here's some background for what I'm looking for:

One way to extend a hexagonal tiling of $\mathbb{R}^2$ into $\mathbb{R}^3$ is to extrude the hexagon along the new dimension, producing a tessellation of $\mathbb{R}^3$ into hexagonal prisms. I'm looking for a different tiling—one that is related to the isometric projection of a cube, using the observation that a cube is projected into a hexagon. The six adjacent hexagons are connected by six of the cube's projected edges. If you consider the cubes as also tessellating $\mathbb{R}^3$, this leaves six more edges; three "above" and three "below." There are six more cells connected symmetrically to this one. It's not terribly difficult to picture this as being an 3D analogue to a hexagonal grid.

The trouble is, I find it awkward that every connection is between edges, not between faces, and also that each edge touches four other cells, but I'm only considering one to be "adjacent." I find the tiling I get from the above scheme to be desirable; if you're looking at a plane of cells such that you see a hexagonal grid, each cell has six neighbors in that plane, as well as three above (centered on the cell's center) and three below (also centered). I'm trying to find a polyhedron that tessellates $\mathbb{R}^3$ that "looks like" a hexagon in a 2D plane, but where I can consider the adjacent cells to be polyhedra that share faces, and where each plane "stacked" on top of each other is regularly translated (in the same manner as the above scheme). 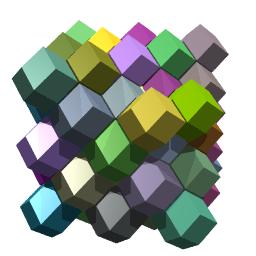 The rectified form of a polyhedron is a new polyhedron whose vertices lie at the midpoints of the edges of the original one. If you take the dual of this, you obtain a polyhedron whose faces correspond to the edges of the original polyhedron. For example, rectification of a cube yields a cuboctahedron, whose dual is indeed the rhombic dodecahedron. You can see the cube in the rhombic dodecahedron by drawing the short diagonals on all its faces. It is face-transitive because its faces correspond to the edges of the cube, but it is not vertex-transitive because it has two kinds of vertices: those corresponding to the vertices of the cube, and those corresponding to its faces.

I'm pretty sure this is the concept you are looking for, though I wouldn't call it an "edge-face dual" because duality is usually expected to be (close to) an involution. Note that it is the same for a polyhedron and its dual, which we expect because their edges correspond to each other, and which is true because the rectified form of both is the same.

For the rest of the Platonic solids:

I can't comment on the rest of your question, as I couldn't follow you to the "3D analogue to a hexagonal grid." However, I can point out that the rhombic dodecahedron is the shape of the Voronoi cell of a face-centered cubic lattice, which does have hexagonal symmetry in an isometric projection, so maybe you're on to something there.

Here are some thoughts formulated in terms of graph theory, and restricted to convex 3-dimensional polyhedra so that Steinitz's Theorem (A graph is 3-polytopal if and only if it is planar and 3-connected) can be used.

There are many ways to take a plane embedding (plane graph) and "transform" it to another plane graph where the new plane graph "inherits" nice properties from the original. The best known of these is the geometric dual where the faces of the original graph become the vertices of the new graph. Another very nice such graph is the medial graph. There is a vertex for each edge of the original and two of these vertices are joined by an edge in the new graph if the edges they represent meet at a vertex and share the same face (for the line graph this last condition is not taken into account). The medial graph of a 3-polytopal graph is also 3-polytopal but it is also 4-valent. Also, dual graphs have the same medial graph.

There are many other nice ways to transform plane 3-connected graphs into new related plane graphs. One interesting one that perhaps is of interest for the original question is to "replace" each edge of the original graph with a hexagon. For the fixed plane embedding outline each face (including the infinite face) inside the face (and close to the original face) with a polygon with the same number of sides. Now join each vertex of these outlines to the nearest vertex of the original graph, and erase the edges of the original graph. Some additional remarks about this are here: http://www.york.cuny.edu/~malk/geometricstructures/2011-session7-TC.html

Not the answer you're looking for? Browse other questions tagged geometry terminology tiling polyhedra or ask your own question.

4
An unbounded convex polyhedron realizing the primes?
6
Is the rhombic dodecahedron the only isohedral polyhedron that tiles 3-space (other than the cube)?
0
The Name of a Polyhedron with 6 Quadrilateral Faces, 8 Vertices, and 12 Edges
2
is it possible to number the edges of a polyhedron so that the sum of the edge-numbers of each face is the same/
5
Why must an isotoxal polyhedron or tiling be isogonal or isohedral?
1
For certain pairs of Platonic Solids, are the edge-centers and face-centers equivalent?
13
Why does a convex polyhedron being vertex-, edge-, and face-transitive imply that it is a Platonic solid?
3
How to construct a chamfered dodecahedron with equilateral or coplanar faces?
3
Is there a tiling of the Euclidean space such that cells that share a vertex or an edge also share a face?