Classifying extrema in the 3d plane

I have a function

Plugging them into the second derivatives, I get positive values for all the points.

Let $f$ be a function of two variables that has continuous second partial derivatives on a rectangular region $Q$ and let:

Let $f$ be a function of two variables that has continuous second partial derivatives on a rectangular region $Q$ and let:

We can also look at a plot of this: 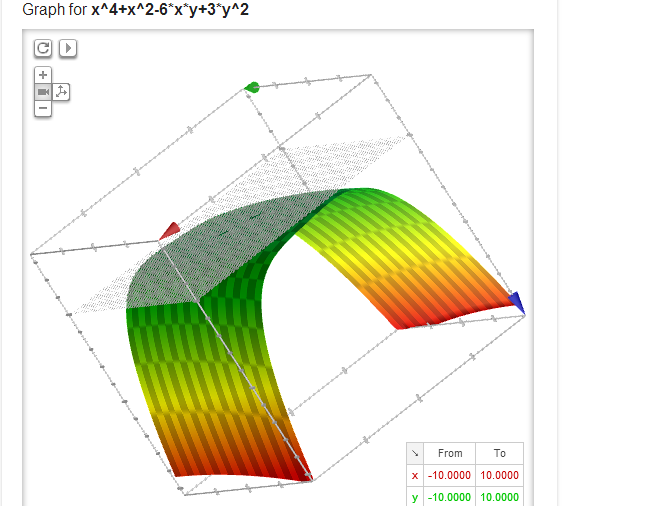 First of all, the question contains a slight error; we have

as stated in the text of the question. All the other derivatives in the question look fine. So, setting $f_x, f_y = 0$, we see that

the characteristic equation is

It's worth noting that the saddle is necessary for topological reasons; since the flow of $-\nabla f$ has two attractors, it must have a saddle lest $\Bbb R^2$ (a connected set) become "pulled apart" by the flow of $-\nabla f$. The saddle allows this since it "absorbs" (that is, is a limit point of) the trajectories tangent to it's negative eigenvector; points flowing into the saddle never reach it or either of the other critical points; the topological integrity of the plane remains intact. NOTA BENE: speaking intuitively, of course!

ADDED IN EDIT: the surface $z = f(x, y)$ looks like a bowl with two "bottoms", the minima. If you imagine a thin sheet of oil or water flowing down this surface under the influence of gravity, you will see that almost all the fluid ends up going down one of the "drains", the attractors of $-\nabla f$. But there are two trajectories which approach $(0, 0)$ as $t \to \infty$; the flow "splits" along them into three "pieces", two heading into the minima, and the third (which consists of the two disjoint curves) heading into the saddle. If you think of what happens for very large $t$, this can be easily visualized. Sorry, no graphics SW at present!

I thank you, and Dr. Morse thanks you!

Not the answer you're looking for? Browse other questions tagged multivariable-calculus optimization or ask your own question.

2
Finding local and global extrema even when the determinant of the Hessian zero
2
Figuring out how to find two of the zeros for max/min/saddle point problem
0
Find all local and global extrema of the function .
2
Classifying extrema via Taylor's Theorem
2
Max and Min$ f(x,y)=x^3-12xy+8y^3$
1
Extrema of the function in a specific domain
1
Constrained (and non) extrema of $f(x,y)=2x^2-2xy^3+3y^2$