Why some functions are not integrable?

Well, well, well, this question actually can go really deep into the elementary ideas of integration, or, in general, finding the area under a curve.

1: The Old School Way - The Method of "Exhaustion"

In the ancient times, and especially during the period when mathematicians such as Eudoxus and Archimedes lived, the main way in which one could calculate the area between non-linear curves was the Method of Exhaustion. We will examine, in short, how would this work on calculating the area of a circle. 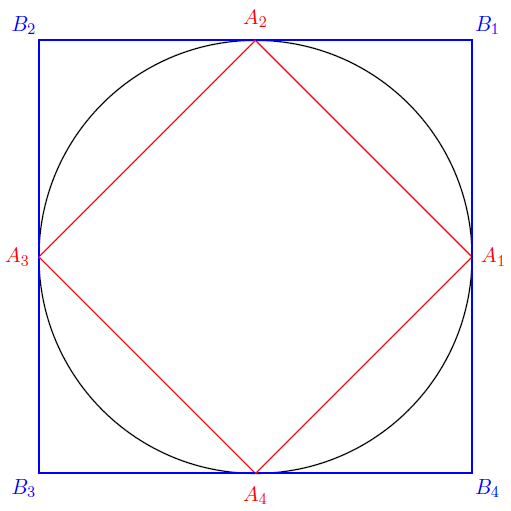 Now, the next step is to enclose the circle in some "tighter" canonical polygons. An easy construction is to construct the octagons that are induced from the two squares $A_1A_2A_3A_4$ and $B_1B_2B_3B_4$, as it is depicted in the following shape: 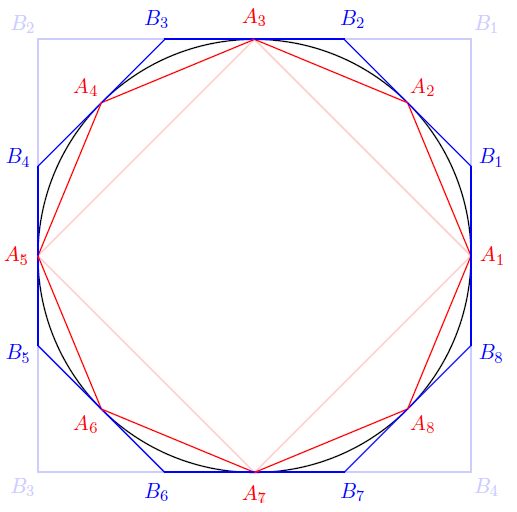 Then one can move a step forward to create a deca-exagon (16 angles canonical polygon) etc. It is clear the the red polygon is always underestimating the area of the circle and the blue polygon is always oversetimating it.

Now, it is relatively easy, using the know formulas for the area of canonical polygons, to prove that both the red and the blue area do converge to the area of the circle. However, since back then calculus was not something "known" with the modern-day meaning (numbers were always treted as geometrical objects and not as abstract notions) they used the following form of Eudoxus' principle:

So, in that framework, it was sufficient to prove that each construction of a new $2^n-$sided polygon was "cutting" more than half of the error - which can be proved, but has a long and tiring proof and, hence, is out of the spectrum of this answer. After that, "convergence" (this is a modern term; it was not used back then) was ensured. What was missing was to show that these two areas (blue and red) were both "converging" to the area of the circle. To do so (since calculus and, hence, limits, were unknown) an argument - again tiring, in the general case - of double contradiction was used.

It is remarkable that, in the same way one could find the volume of the sphere and several other 3D shapes.

It is called Riemann Integral, however, in order to find the very solid geometric foundation of the notions of integral and integration we should investigate the so-called Darboux Upper and Lower Sums.

Also, we give the following definition:

Note now that, in this way, Rieman integration is "just" a more generalised implementation of the Method of "Exhaustion" that ancient mathematicians used. Instead of canonical polygons, we do use the polygons induced from the partition of $f$'s domain we choose and these polygons are, in a way inscribed and circmuscribed to that curve. Also, thinner partitions are, in a sense, the same thing as going form a canonical $n-$polygon to another canonical $m-$polygon, with $m>n$. Moreover, what we seek, in order to be able to say that a function is Riemann integrable, is for the two limits of the sequences of the estimations given by the Darboux sums do converge to the same number, which was also the wanted in the Method of Exhaustion, in spite of not being proved with modern day calculus but with "old-fashioned" - however, interesting - geometrical arguments.

So, to conclude, a function is not Riemann integrable exactly when the Method of Exhaustion cannot be applied to the curve that represents it graph.

3: Appendix - Integration as infinite non-countable summation and the Heuristic Method of Archimedes

In a "palimpseston" (Παλίμψηστον) - a script written on parchement that has been scratched and re-wrtiten in a direction vertical to the previous one - that was found in the early 20th century in an orthodox monastery close to Constantinople, after a small "adventurous" trip and, eventually, the proper scientific investigation, it was found that, the original script was a letter that Archimedes had writen to Eratosthenes in which, among other things, he was explaining the way though which he could find the results he should prove, however, he notes that he does not consider this method to be a method of prooving his results, just a way to "get a felling" of what the goal is.

In one of his examples he describes the way he found the area of a parabolic part - see this article in wikipedia: https://en.wikipedia.org/wiki/Archimedes_Palimpsest - and at some point he mentions that the reason he cannot consider this a proof is that of using a "summation of segments over an interval of real numbers" - this is in modern terms, not the ones used by Archimedes! So, with respect to the historical frame, Archimedes was very close to the notion of infinite, non-countable summation that we give to the Riemann integral, nowadays.

I think this is more or less due to Banach-Tarski paradox, which shows a ball can be decomposed into a finite number of point sets and reassembled into two balls identical to the original one. This means we cannot define measurement (a conception rather related with integration) for every point set.

3
Can a sphere be considered the limit of a regular polyhedron with infinite faces?