What is the relation between a Banach space and a Hilbert space? [closed]

This question is missing context or other details: Please improve the question by providing additional context, which ideally includes your thoughts on the problem and any attempts you have made to solve it. This information helps others identify where you have difficulties and helps them write answers appropriate to your experience level.

What is the relation between a Banach space and a Hilbert space?

I know that a Hilbert space has inner product (and so a norm), but a Banach space has a just norm.

Hilbert spaces are a stricter subset of Banach spaces but they have the additional structure of an inner product which allows you to talk about orthonormal bases, unitary operators and so on. Example: Fourier transform theory is really beautiful on $L^2(\mathbb{R})$ but it is much more complicated on other Banach spaces because you don't have a notion of self-duality like in $L^2(\mathbb{R})$. You actually have to abstract a lot to define the Fourier transform on other $L^p$ spaces.

Hilbert spaces have an easier structure and are in a way (most often infinite dimensional) Euclidian spaces. However, many spaces of interest that are Banach spaces are not Hilbert spaces, hence they are important too.

I don't think they are "better", per se. A Hilbert space is a very special type of Banach space - one which is meant to generalize familiar notions from $\mathbb{R}^n$. (For instance, you can quite naturally speak of when two vectors in Hilbert space are orthogonal).

In general, Hilbert spaces are "easier" to understand than general Banach spaces, and are usually a good place to start if you are learning the subject (For instance, try to see why the Hahn-Banach theorem is much simpler for Hilbert spaces)

Since most of the time we deal with $\mathbb{R}^n$, you can say that one has advantage over the other in $\mathbb{R}^n$. So I consider $\mathbb{R}^n$ and explain why Hilbert spaces are more useful in practice:

Hilbert space is defined as a vector space $H$ equipped with an inner product $\langle \cdot,\cdot \rangle$, consequently this inner product induces a norm which we call it a metric, $d(\cdot,\cdot)$. Hence, it is the time to define a new vector space $M$ endowed with the mentioned metric $d(\cdot,\cdot)$ which is a metric vector space. Now if every Cauchy sequence in $M$ converges to a point in $M$ we have Banach space which is a complete metric space. In $\mathbb{R}^n$ the relation is as follows: 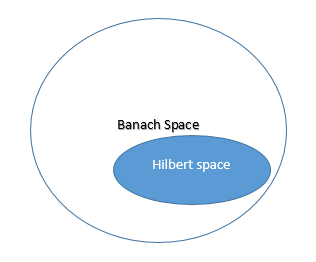 Keep in mind that in a vector space $M$, the only tool that we have is the metric $d(\cdot,\cdot)$, so we can talk about length of a vector or distance between vectors.

However, when we have inner product that satisfies Parallelogram law, we also have an inner product through which we can define projection from one vector to another which is of interest in practice because we can talk about the angles. Using this concept, optimization problems such as minimum distance to a subspace can be defined as projection of that point onto a set.

Not the answer you're looking for? Browse other questions tagged functional-analysis soft-question or ask your own question.

4
What space to use?
0
Functions allowed in Hilbert and Banach spaces.