I have learned this formula ages ago and I'm just using it like most people do, but I don't think I truly understand how circles work until I understand why this formula works.

So I want to understand why it works and not just how.

Now, to find the constant $b$, I think the easiest way is to look at this Wikipedia diagram: 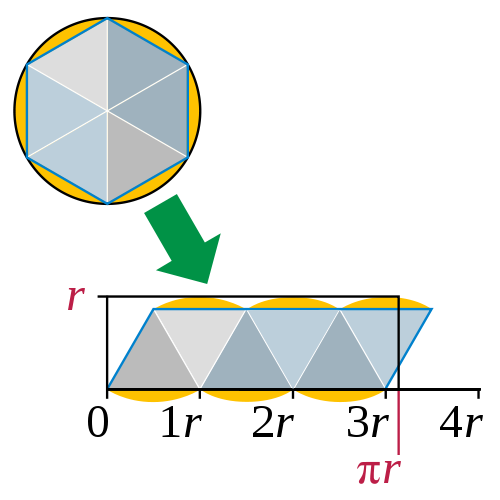 This shows how when you subdivide the circle into many equal small triangles, the area becomes a rectangle with height $r$ and length equal to half the circumference of the circle, which is $\pi r$, by the definition of $\pi$.

Much depends on how you define $\pi$. It is intuitively easy to see that for circles the ratio between the area and $r^2$ is constant, and you could define $\pi$ to be this constant.

If however you defined $\pi$ in the more usual way as the (also constant) ratio of the circumference and the diameter $2r$ of circles, there is an intuitive way to see that this same constant should also give the ratio between the area and$~r^2$. If you approximate the circle by any polygon (not necessarily regular), all of whose sides are tangent to the circle, then the area of the polygon will be exactly $\frac r2$ times the circumference of the polygon. This is because the polygon can by cut up into triangles, each having as base a side of the polygon, and all sharing the center of the circle as vertex. Thus all these triangles have height$~r$, and if $b$ is the basis of such a triangle (a side of the polygon) its area is $\frac r2\times b$. 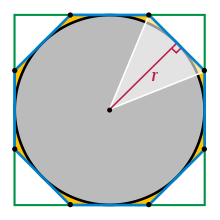 I would like to note that this is an intuitive, not a formal argument. The delicate point in that the area and circumference of the polygons both tend to that of the circle. For the area this is fairly easy to justify, as the neighbourhood of any point outside the circle eventually does not contribute to the area of the polygons either. But for the circumference it is not obvious, as it is possible to obtain a curve as a limit of a set of polygonal lines while the lengths of the latter do not tend to the length of the curve. The fact that this is not the case here is related to the fact that the polygon sides all tend to be parallel to the circle arc near it.

One way to prove it is the following : Embed a regular polygon (ie. all sides are equal, all angles are equal) in a circle (ie. its vertices are on the circle. Divide this polygon into $n$ triangles by drawing radii out to the vertices. Calculate the area of this triangle and multiply by $n$, and you will get the area of the polygon.

So all that remains is proving the above formula :)

A number of different ways of showing this exist. First notice that the area has to be $(\text{constant}\cdot r^2)$ because the area of a region of any shape in a plane must be proportional to the square of the distances. E.g. if you multiply all distances by $3$, then the area is multiplied by $9$. And "constant" in this case means it's the same number regardless of what $r$ is. So now the question is: Why must the "constant" be the same as the ratio of circumference to diameter?

That's only one way to do it; there are others.

My knowledge is base on a removed(?) video from Dr. James Grime on the YouTube channel "Numberphile"

Properties of the Area(s) of a triangle: 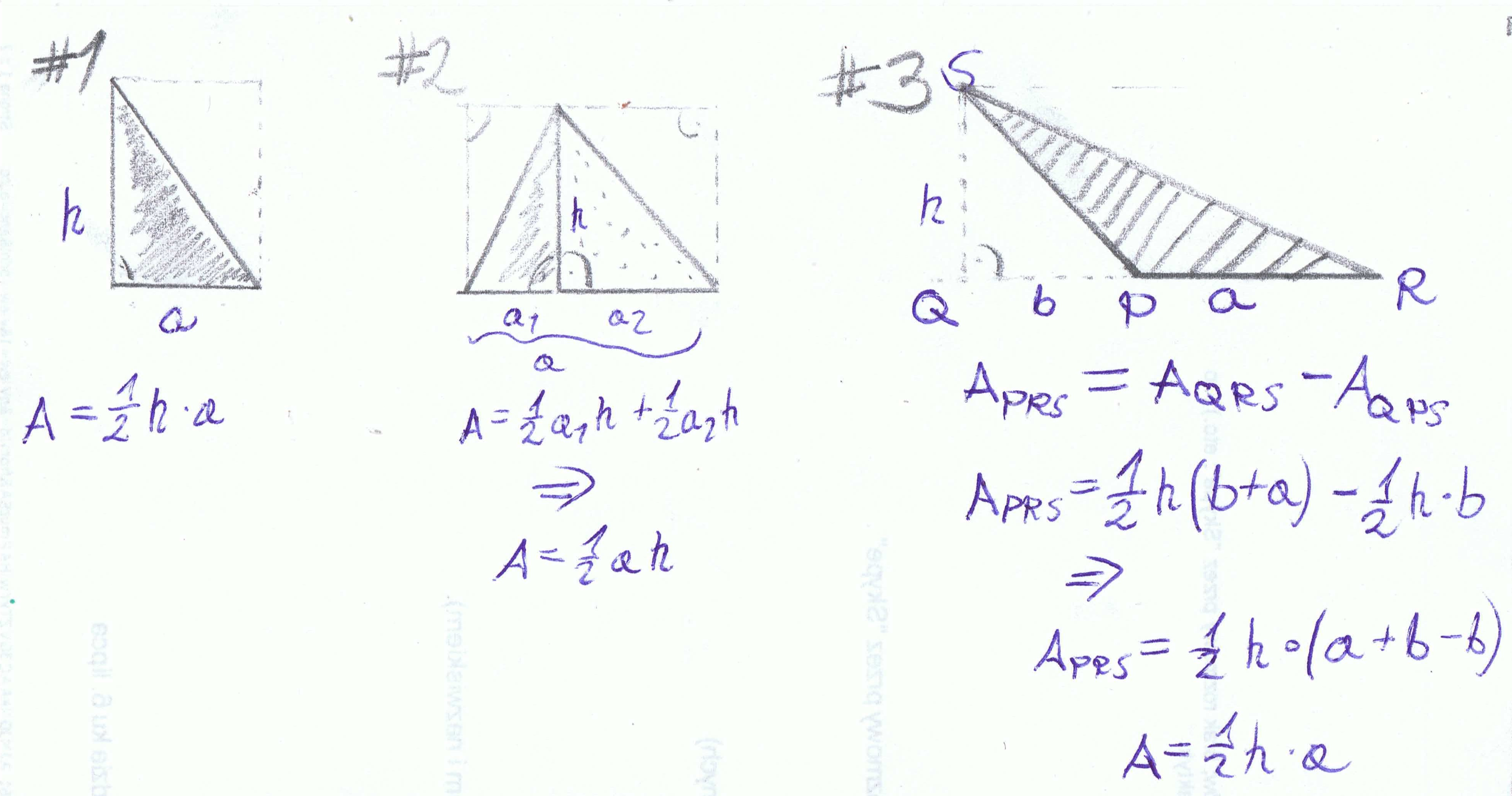 Let have a circle with the radius $r$. We split the circuit into equal $d$ parts (in best case: infinitesimal short parts); now we imaginate a cut once into the center- so we get kinda a handheld fan with a lots of quasi-triangles. last move is to use property #4:

I also recommending to check the rings version on YouTube from:

Not the answer you're looking for? Browse other questions tagged circles surfaces pi or ask your own question.

0
Please find the radius of the circle.
3
Squaring of the circle
1
Algorithm - Circle Overlapping
1
How to find the distance from a point outside a circle to any point on a circle.
3
What exactly is a surface integral?
0
Surface area of a sphere alternative
2
Construction of Steiner Porism with concentric circles