I am re-learning Calculus. Can anyone provide any interesting (unexpected?) situations where Calculus derivatives arise in various situations or real-life careers? I am looking for something more substantial than typical textbook examples such as a car driving down the road, or water flowing in a cone, etc.

So far, I understand the relationship between:

A handout from my vector calculus class. 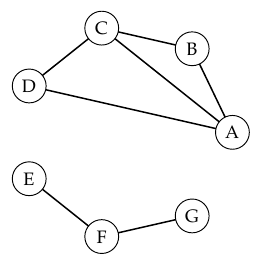 with the unimaginative names $A,B,C,D,E,F$ and $G$. An edge connects each pair of friends. This network or graph consists of two smaller, distinct graphs or components.

Question: How to write an algorithm to suggest that person $B$ befriend $D$?

Question: How to determine the components of the graph using this matrix?

In real life, graphs aren't as simple as the one pictured above. In fact, the graph may consist of one giant component with tightly clustered "approximate components" embedded within. (See any of the images in this search.) And if the graph does have a lot of components, there are more computationally efficient methods of finding them. So why introduce the graph Laplacian? It turns out that the graph Laplacian is a basic object in the field of spectral clustering, which has numerous "real life" applications. In fact, I actually used the technique at a previous job while analyzing a large dataset.

I should point out that in spectral graph theory, you analyze all eigenvalues of the graph Laplacian not just $\lambda=0$, as we have done.

Question: What does this have to do with derivatives?

If you take multi-variable calculus, you may learn about the Laplace operator $\Delta = \frac{\partial^2}{\partial x^2} + \frac{\partial^2}{\partial y^2}$, which I have written in two dimensions. You may not believe it, but there's actually a connection between the Laplace operator and the graph Laplacian which can be explained via the discrete Laplacian!

These are ways ChemEs and other process engineers use them in manufactering.

Any measure that can be graphed over time: Housing markets -> how fast houses are selling, instantaneous daily sales, change in sales since yesterday etc. others:

In my work as an HVAC technician, we use "PID loops," where PID stands for Proportion, Integral, Derivative. These terms are exactly descriptive of the process that the loop performs on each iteration, but rather than doing actual integration or derivation, a typical object will perform approximations of these.

Another good use of a PID loop is in your cruise control in your car, where the loop controller automatically increases and decreases fuel flow rate to your engine in response to the changing speed that it senses based on your setting of how fast you want to go.

My favorite example of an unexpected situation where the derivative comes up is definitely the notion of a "one-hole context" for an algebraic data type.

Here's an example. Let's define the data type of "letter trees" recursively, as follows. A letter tree consists of either

We can write this definition in the form of an equation, using multiplication to indicate the pairing operation (equivalent to a cartesian product), and addition to represent the "either/or" (equivalent to a disjoint union). The definition, in that form, looks like this:

Now, here's a question. What would the data type of "missing-letter trees"—trees with exactly one letter missing—look like?

A missing-letter tree consists of either

If we write out this definition as an equation, using $T'$ to denote the type of a missing-letter tree, the equation we get is:

But notice that this equation is exactly the derivative of the equation for $T$ with respect to $L$!

This "trick" works for any algebraic data type. I don't know why it does, but I think it's quite interesting.

Not the answer you're looking for? Browse other questions tagged calculus integration derivatives or ask your own question.

34
Cool mathematics I can show to calculus students.

2
Position of a particle moving along the $x$-axis question
1
Speeding Up and Slowing Down of Particle
0
Differentiating equation of water volume in the cone
3
What is the conceptual meaning of a definite integral?
0
Finding derivatives , where am I going wrong?
2
Integrating Derivatives of Inverse Trigonometric Functions When They Are in Similar, Yet Different Forms
4
Can the same problem be done without calculus?
0
Radioactive Decay Equations and Some Related Confusion on Discrete vs. Continuous Growth/Decay, Continuously Compounding Interest, etc.
0
Calculating derivative of linear distance