What is the Probability that a Knight stays on chessboard after N hops?

A position is represented here by co-ordinates $(x,y)$.

A move is aslo considered as valid, where the Knight lands outside the chessboard [ For eg. from $(3,2)$ towards $(3,1)$ but ends up outside chess-board. ]

But once outside, it can't come back.

Knight starts from $(0,0)$. What is the Probability that a Knight stays on chessboard after N hops?

a. the thought/procedure/methodology to find it with

The problem is a Markov chain, and we can attack it with linear algebra!

First, we can simplify the problem by exploiting the symmetry of both the knight's movement and the chessboard. Let's add the following rule: 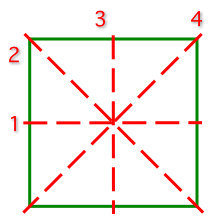 Now we have an $11\times11$ square matrix $P$. For all $n$, the matrix power $P^n$ is the transition matrix for $n$ moves! So, let's arbitrarily index the initial square as $i=1$ and the off-the-board position as $j=11$. Then the probability of leaving the board after $n$ moves is $(P^n)_{1,11}$, and the probability of staying on the board is: $$1-(P^n)_{1,11}$$ That's as far as I can take you. You could express this formula more explicitly by calculating $P$ and then finding its Jordan normal form. Then you'll have a formula for the powers $P^n$, and you can pull out whatever matrix element you want. If you've seen the explicit formula for the Fibonacci numbers, it's the same principle, but with a larger matrix!

As mentioned by Chris Culter, the computation is somewhat tedious. Following Chris and labeling the 64 fields so as to make the symmetries explicit, e.g:

From 0,0 allready 6 of the possible 8 moves end off board
Of the two remaining moves 2 out of the 8 end off board
That should give you allready a good indication how difficult it will be to keep the knight on the board.

Whatever method you use to get the exact solution (and I suspect it will involve getting the eigenvalues of an 11x11 matrix), consider using a spreadsheet to calculate the probabilities for small n, say n ≤ 10,000, and when you have done that, it lets you verify that your exact solution is actually correct.

To calculate the probability after N hops, we look at the POSITION(s) of the knight at N-1 hop. I think this was what the others were referring to as Markov chain.

This means that it will have 2/8 probability of staying on the board after 1 hop.

For each spot, it has 2 spots it can take to stay on the board.

We multiply probabilities when we want events to occur simultaneously, or consecutively.

I interpreted this from the following link. I too, wasn't sure how the probability was derived and this was the best resource that explained it in a simple way :) https://zxi.mytechroad.com/blog/dynamic-programming/688-knight-probability-in-chessboard/

Not the answer you're looking for? Browse other questions tagged probability combinatorics statistics recreational-mathematics or ask your own question.

14
Is 39 moves the longest a chess game can go moving only pawns?
4
Setting up an English pool table
39
Show that a generalized knight can return to its original position only after an even number of moves
24
Knight returning to corner on chessboard — average number of steps
1
Number of ways for a knight to move to a certain square on a chessboard
23
How much of an infinite board can a N-mover reach?
3
Given an $n\times m$ grid and $x$ superqueens, what's the minimum number of moves for the superqueens to be symmetric?