Where does the term "integral domain" come from?

Self-explanatory title really! A student today asked me why they were called integral domains -- and I realised that the word "integral" seems to be being used in a way totally unlike any other way I hear it used in mathematics. The student suggested that "integral" was used because the integers were an example -- but I didn't buy this because by that logic they could have been called "rational domains" or "real domains".

Edit: I only see now that most if not all of the points were already made in the comments, but since I provide links and excerpts I leave the answer here. What I think is the answer comes right at the end of this lengthy post.

Disclaimer: This is not a definitive answer but I traced the German word Integritätsbereich through some famous older texts in German and I reproduce here what I found. It essentially confirms what Bill Dubuque said in several comments. Let me stress that I only looked in the most obvious places, so there may be earlier usages or better references than the ones I give here:

1. Early usage in the sense of algebraic integers

In Hilbert's Zahlbericht (1897) we find the following passage (unfortunately I can't access the English translation, so I hope German will do), which I'm reproducing from page 121 of volume 1 of his collected works (Göttinger Digitalisierungszentrum GDZ):

As Bill Dubuque pointed out in a comment, the term Rationalitäts-Bereich appears in Kronecker's Grundzüge einer arithmetischen Theorie der algebraischen Grössen (1882) and there is the following passage mentioning Integritäts-Bereich (reproduced from archive.org) on pages 14 and 15:

As far as I can tell, Kronecker stuck to his intention of not using "Integritäts-Bereich" and I found it only mentioned once more at the beginning of § 22 on page 84.

For the sake of completeness: Hilbert also mentions Rationalitätsbereich and refers to Kroneckers work above as well as to Dedekind's Supplement XI to Dirichlet's Vorlesungen über Zahlentheorie, titled Über die Theorie der ganzen algebraischen Zahlen, available in volume 3 of Dedekind's collected works (GDZ) both in German and in French. As far as I can tell the word Integritätsbereich is not mentioned there (as Hilbert mentions the word Ordnung is used instead) but, incidentally, we find Zahlkörper, rationale ganze Zahlen, and, of course algebraische ganze Zahlen (and many more terms) used in precisely the same way as they are used today.

The modern abstract notion can be found in Emmy Noether's work (where else?), for example in Idealtheorie in Ringbereichen, Math. Annalen 83 (1921), 24–66 (the underlined text appears this way in Springer's online edition). 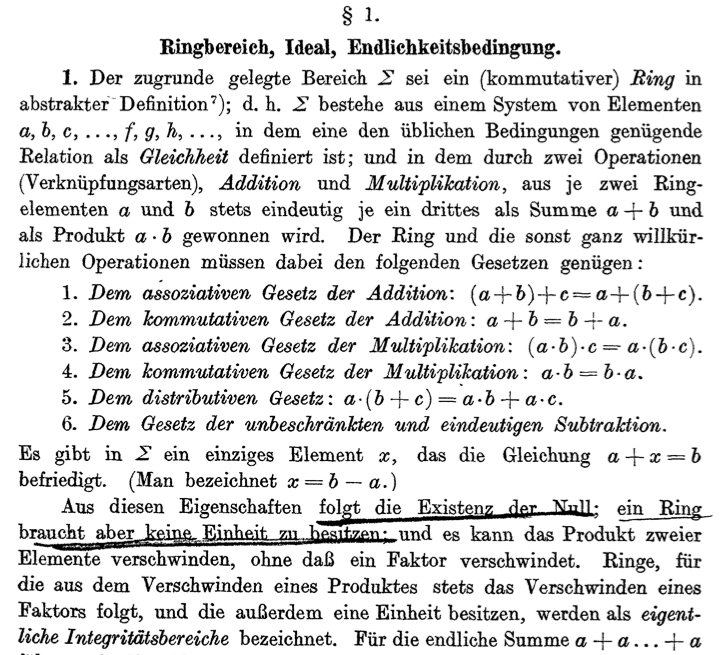 Of course, this doesn't explain why exactly this property of algebraic integers should be isolated, not something else but maybe that's something that only Emmy Noether herself could answer.

The fact that an integral domain embeds into its field of fractions which is constructed in analogy with the construction of the rational numbers out of the integers is explicitly mentioned here. This seems a reasonable explanation for the choice of terminology which allows us to think of the elements of an integral domain as integers in some field. Of course, the term "ganze Zahl" (integer, literally: "entire number") is to be understood as "not a real fraction", that is: a fraction representable as $r/1$ with $r$ an element of the domain $R$.

In fact [slightly paraphrasing], Fraenkel even goes so far as to say that the ring properties of an integral domain are only artificial ("nur künstlich") and inherited from a surrounding field, as opposed to a ring with zero divisors which is deemed to posses a natural ("natürlich") structure of a ring. This also explains why "Integritätsbereich" is only mentioned this one time in the entire paper.

There is also a detailed discussion of the axioms of rings, quite close to what one finds in any basic algebra text nowadays.

Earliest Known Uses of Some of the Words of Mathematics claims that the first recorded use of this term is in the 1911 text Monographs on topics of modern mathematics. It has a slightly different meaning there: if $r_1, ... r_n$ are numbers (I cannot get a clear sense of exactly what kind of numbers are considered here; perhaps algebraic integers) then $\mathbb{Z}[r_1, ... r_n]$ is called in that text the domain of integrity of the $r_i$ and $\mathbb{Q}(r_1, ... r_n)$ the domain of rationality of the $r_i$.

The terminology seems (based on my quick read) to have been motivated as follows: the first object is the closure of the $r_i$ under "integral operations" (addition, subtraction, multiplication, more generally composition with an integer polynomial) while the second is the closure of the $r_i$ under "rational operations" (addition, subtraction, multiplication, division, more generally composition with a rational function). Of course $\mathbb{Z}[r_1, ... r_n]$ is always an integral domain in the modern sense; perhaps that's how the terminology evolved.

van der Waerden's Modern Algebra (1930) contains the modern definition with no comment, so it was established by then (perhaps van der Waerden was responsible for establishing it!).

I've always heard that the term Integral Domain comes from "domain of integrity" meaning "no cracks" in the ring, with the idea that zero divisors are like flaws in a diamond. This description comes from my teacher, the late great Prof. Gerhard Hochschild of UC Berkeley. So there.

4
What does the "integral" in Integral domain stand for?
53
History of the Concept of a Ring
13
Definition of Ring Vs Rng
7
Why integral domain is also called entire ring?
0
Is there any number $n$ such that $nm=0$, $n\neq 0$, and $m\neq 0$?
2
The notion of a domain
0
A question on the integer domain